Three trends have dominated ultrasound product launches of the past year – artificial intelligence capabilities, handheld systems, and designing for the end-user’s comfort. Holley Lewis, lead analyst for the Ultrasound Intelligence Service, discusses the short-term outlook for these trends and their impact on the global ultrasound market.

Three trends have dominated ultrasound product launches of the past year – artificial intelligence capabilities, handheld systems, and designing for the end-user’s comfort.

The short-term outlook for these trends and their impact on the global ultrasound market are discussed below.

Artificial intelligence (AI) programs, where computers are trained to perform tasks that normally require human intelligence, are at the forefront of ultrasound innovation this year. AI algorithms, also known as deep learning algorithms, have the potential to revolutionize the way radiologists interpret medical images and diagnose patients. Radiologists using AI tools will be more efficient and accurate than radiologists working alone, so AI could hold the key to improving patient outcomes and driving down healthcare costs.

Since 2012, multiple start-ups focusing on AI in radiology have emerged. 2017 saw the first launch of an AI-equipped ultrasound system when Butterfly Network released the iQ, a handheld system embedded with machine learning algorithms that guide users during scans. GE Healthcare followed in early 2018 with its launch of the LOGIQ E10. Graphic processing units (GPUs) were incorporated into the system to support the analysis and processing of massive volumes of data with future AI applications in mind.

IHS Markit expects a major wave of AI-equipped ultrasound systems to be launched during the next three years. To remain competitive, leading players are incorporating AI into their product offerings and pushing software-led marketing plans. AI for ultrasound is still in its infancy, and manufacturers must develop strategies to capitalize on this revolutionary technology. New software, hardware, and training programs will be required as AI radiology technology evolves.

Although the benefits of AI-equipped ultrasound systems are yet to be realized, AI will remain a key trend for ultrasound products. As the technology’s role in the diagnostic imaging world continues to evolve, expect new iterations of AI ultrasound software to be frequently released by manufacturers.

The growing popularity of quick examinations at the point–of–care is paving the way for the adoption of handheld ultrasound systems, and handheld revenues grew 17% from 2016 to 2017.  Several new systems were introduced to the market in 2017, and this trend will continue during the coming years. Handheld ultrasound systems are marketable in both emerging and mature markets, but the recent boom in the handheld market segment has uncovered several questions about the future of pocket-sized ultrasound machines. Does ultrasound really have a place in every primary care provider’s work flow? Can physicians accurately diagnose a patient by looking at an iPhone screen, and is this safe? Are projections that the handheld market will grow by over 50% Y/Y based in reality or just hype? These questions will be answered as the handheld market develops during the next five years. In 2018, manufacturers should focus on improving the resolution, image clarity, and battery life of their handheld products and should push for more handheld ultrasound education and awareness.

GE Healthcare remained the largest supplier for handheld ultrasound equipment in 2017, but the company lost share due to several new products entering the market. The next three largest market shareholders, Philips Healthcare, Siemens Healthineers, and Fujifilm Sonosite, also lost share. Other companies in this market captured 15% of global revenues in 2017. These companies included the start-ups Clarius and Butterfly Network, both of which launched their handheld ultrasound products in the United States at very low price points. 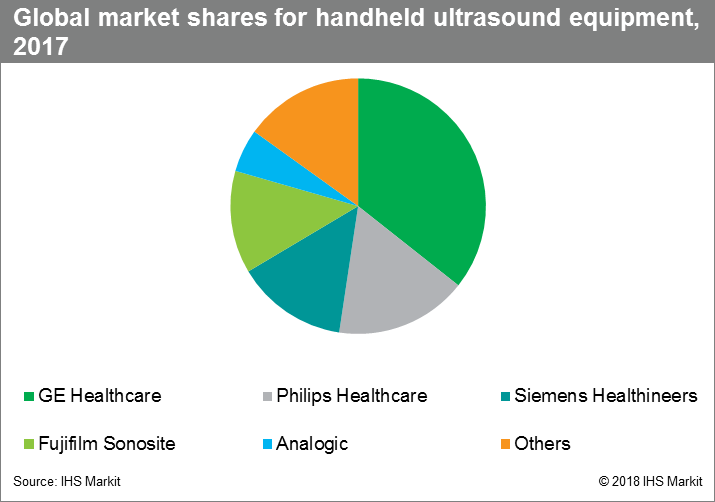 The future of the handheld ultrasound market remains contentious. During the next several years, the market will become more crowded and average selling prices will continue to fall. As ultrasound makes its way into the hands of more end-users, questions regarding patient safety and cost-benefits will increase. Performing high quality ultrasound examinations requires many hours of education and training; the growing popularity and increasing accessibility of handheld ultrasound equipment could place these products in inexperienced hands, and the convenience of handheld ultrasound systems in the pockets of every physician could lead to unnecessary imaging and missed diagnoses.

Despite these challenges, IHS Markit forecasts handheld ultrasound revenues will grow at a CAGR of 13% from 2017 to 2022. Increasing demand for point-of-care applications, such as emergency medicine and primary care, will continue to drive growth for the handheld market. The mobility and relatively low price points of handheld ultrasound products are too attractive to be ignored.

Designing for the end-user

Recent product launches, like the Siemens Healthineers ACUSON Juniper and the Esaote MyLab 9 eXP, show that ultrasound manufacturers are increasingly marketing products to appeal to end-users through ergonomic design, simplified workflows, and IT integration. Designing ultrasound systems that focus on the end-user’s comfort is a solid strategy; the IHS Markit Medical Sonographer Survey found that 72% of medical sonographers have a strong influence on ultrasound purchasing decisions, and a further 13% are the final decision maker. According to the same survey, radiologists are considered to be the most important influence on ultrasound equipment purchasing decisions. Ultrasound companies can make their products more attractive to radiologists and sonographers by excelling in the following areas: 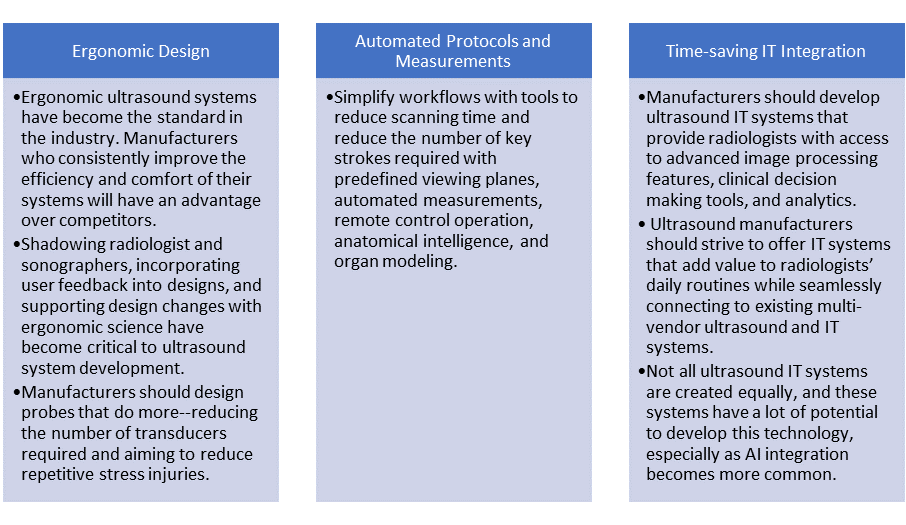 The utility of AI-equipped ultrasound products is still largely unknown, but there is no doubt that the market will be flooded with AI systems during the next several years. Similarly, handheld ultrasound product launches will continue to increase, and these systems will play a major role in the expansion of ultrasound to primary care and other point-of-care users.  Across all product categories, ultrasound manufacturers will work to separate their products from their competitors’ by designing equipment to address the specific needs of radiologists and sonographers.