Sound quality in technology has never been more important than today, particularly as more sophisticated smartphones and a growing number of smart devices are now able to process language and voice commands. Ideally, the components responsible for sound sensing in modern devices should also deliver high-quality audio for a more pleasant voice-call experience, come in a small form factor for easy integration into already portable gear, and deliver good performance amid noisy background environments without consuming too much power.

Little wonder, then, that prospects will be booming in the years to come for MEMS, or microelectromechanical systems, microphones—a class of miniscule devices using acoustic sensors in combination with a pressure-sensitive diaphragm and an application-specific integrated circuit (ASIC), fabricated on silicon wafers, to sense voice and sound. 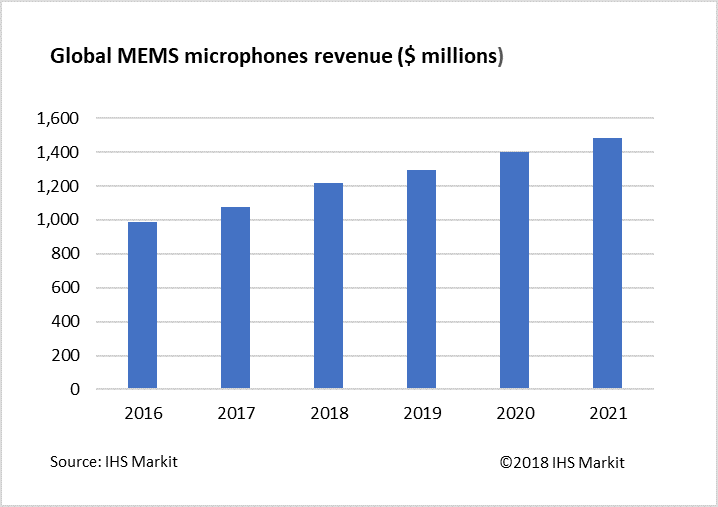 The MEMS microphones market is driven primarily by mobile handsets, with microphone consumption per smartphone on the rise since 2010.

Aside from smartphones, MEMS microphones derive significant revenue from their use in earphones, laptops, hearing aids, and smart speakers. The latter, in fact, is the fastest-growing application for MEMS microphones: smart speakers are projected to enjoy a five-year compound annual growth rate of 36% from 2016 to 2021, IHS Markit data show.

Smart speakers are part of the MEMS microphone segment catering to Internet of Things (IoT) devices. Other IoT devices in the segment using MEMS microphones include wearables, remote-control gear, and home appliances like refrigerators, air conditioners, and service robots.

Features and technology in MEMS microphones

At present, capacitive technology is the best choice for high-SNR microphones, without compromising the size and the form factor of the device. High-SNR microphones feature SNR levels higher than, or equal to, 64 decibels. In the past, low-SNR microphones, featuring SNR levels of less than 60 decibels, were the standard device in many handsets. However, limitations in their performance became clear in situations like voice recordings and voice commands, where there was some distance between the microphone and the source of the sound being recorded.

The top three suppliers of MEMS microphones based on revenue are Knowles of Illinois and the Chinese makers Goertek and AAC Technologies. Together, the three represent nearly 80% of global MEMS microphones revenue. In shipments, the top three are Infineon of Germany and the Japanese manufacturers Omron and NJRC.

Amazon has become a heavy consumer of MEMS microphones, making up 45% of the total revenue of the MEMS microphones IoT segment. Outside of the handset space, Amazon is the biggest buyer, ahead of Hewlett-Packard. Amazon deploys up to eight MEMS microphones in its Echo smart speakers, which can be controlled through Alexa, Amazon’s digital assistant, via natural speech and voice command.