Fixed investment is finally returning to the North American energy sector. However, operations and market dynamics evolved considerably during the downturn, resulting in a shift in subsector machinery and medium-voltage drive demand.

North American pipelay activity peaked in 2013. Indeed, IHS Markit estimates that over 14,500km of pipeline was constructed. At the time, the midstream subsector accounted for nearly 70% of medium-voltage drive shipments attributed to the American oil and gas market, primarily used in pipeline booster stations. Midstream crude pipeline investments, however, increasingly suffered from delays and cancellations associated with the oil surplus. By 2017, pipelay had fallen by almost 35% to less than 10,000 kilometers added, and machinery demand declined correspondingly. 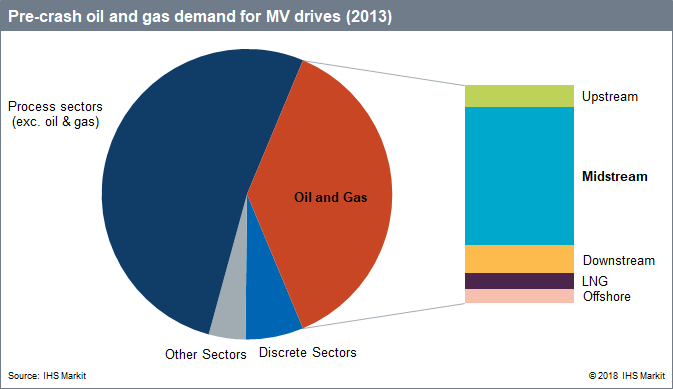 The decline in midstream projects took a significant toll on medium-voltage machinery demand. As midstream oil and gas projects accounted for approximately 25% of the total medium-voltage drive revenue in 2013, the four-year decline in pipeline projects resulted in a $70 million sales deficit by 2017. Although the mid-stream market decline is forecast to finally end in 2018, growth opportunities remain scarce: IHS Markit estimates that North American pipelay will grow by just 2.5% compound annual growth rate (CAGR) from 2017 to 2021. Given the low probability that mid-stream demand will return to pre-crash levels, suppliers have understandably looked elsewhere within the oil and gas sector for growth-oriented medium-voltage applications. Enter the heyday of North American natural gas liquids (NGL) production.

While the North American shale revolution had a negative impact on energy prices, the prevalence of gas-rich production (along with the removal of US oil and gas export restrictions) allowed the North American energy sector to make strategic investments in NGL facilities. This has provided opportunities for medium-voltage drives in NGL processing, particularly in compressor applications used for fractionation. Medium-voltage suppliers have stated that NGL demand for medium-voltage drives will be the most stable source of revenue growth over the next 3-4 years.

Among the various types of NGL production, Ethane production is forecast to have the largest impact on growth. Ethane demand is expected to grow at higher rates than LPG and natural gasoline in the United States, with new ethane crackers coming online in 2018 and 2019, such as those at Chevron Phillips Chemical’s Cedar Bayou facility in Baytown. Several new ethane-based ethylene plants in the US will provide added domestic demand for ethane production.

Ethane demand will also rise due to increased exports, specifically to Asian markets. China’s demand for LPG has spiked since 2015, as LPG prices collapsed along with crude oil prices, causing some natural gas users to switch to LPG. IHS Markit estimates that approximately 4 million metric tons (MMt) of LPG replaced an equivalent 5 billion cubic meters (Bcm) of China’s natural gas demand in 2015 and 2016. As oil prices recover, only a portion of consumption is expected to revert back to natural gas, and not before 2020. US NGL production and terminal capacities expanded to address stronger demand abroad. Propane and normal butane exports from the United States have grown dramatically in recent months, as they have additionally displaced Middle East exports to Asian markets.

While most medium-voltage drive demand is forecast to come from greenfield NGL installations, the retrofit market provided additional sales in 2017. 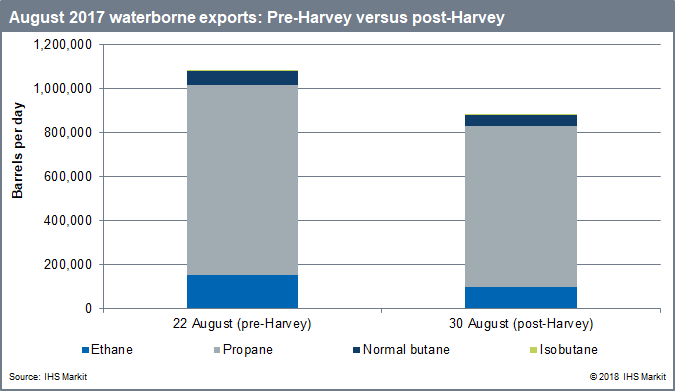 Damage caused by Hurricane Harvey required machinery replacements and repair for NGL facilities and pipelines, resulting in added demand for MV drives and services. IHS Markit estimates that NGL production at natural gas processing plants was down by approximately 180,000 b/d after Harvey hit the Texas Gulf Coast. Most repairs and replacements stemming from this weather event have been completed, though some operational setbacks stemming from floods have caused indefinite delays among downstream oil and gas customers.

Some additional market opportunities in short-term forecasts include the conversion of existing crude pipelines for NGL supplies, such as the Andeavor Logistics project to convert a segment of its Bakkenlink crude oil line to NGL service. Pipeline conversions are not likely to require new medium-voltage equipment, as existing equipment is likely to be oversized for NGL applications. However, the midstream activity is forecast to support medium-voltage services while the drought of midstream investment continues.

The IHS Markit Medium-voltage Drives Intelligence Service tracks global and regional markets for motor drives with rated input at or above 1,000 volts. It includes worldwide and regional market size, forecasts through 2021, analysis, trends, and a diameter deployment tracker.