In late April of this year, T-Mobile US announced plans to merge with its domestic competitor, Sprint Corporation. This is the third time a merger between the third- and fourth-largest US wireless service providers has been proposed. Last year’s deal attempt ended due to a dispute over who would control the combined business entity.

In late April of this year, T-Mobile US announced plans to merge with its domestic competitor, Sprint Corporation. This is the third time a merger between the third- and fourth-largest US wireless service providers has been proposed. Last year’s deal attempt ended due to a dispute over who would control the combined business entity.

In 2014 Sprint -- backed by its parent company SoftBank -- dropped its pursuit of T-Mobile amid regulatory opposition. This time around, T-Mobile US and Sprint are confident they will get the necessary approvals from both companies’ shareholders. For the all-stock deal to proceed, they will also need to convince the Federal Communications Commission and the US Department of Justice that it will not adversely impact competition and choice for consumers and business customers.

With a nod to these concerns, T-Mobile US has argued that the combination of its 600 megahertz (MHz) assets and Sprint’s major 2.5 gigahertz (GHz) holdings will enable them to deliver a broad and deep 5G network which will improve access to broadband, citing that 51 percent of Americans do not have access to more than one fixed broadband operator. The Deutsche Telekom-controlled operator has also touted the knock-on benefit of this increased pressure on AT&T and Verizon to ramp up their own 5G network plans.

Competition among service providers in the IoT space is intensifying

A planned expedited nationwide deployment of 5G by the merged company, with an investment of US$40 billion over three years, will also drive its long-term ambitions in the Internet of Things (IoT). Though not yet fully standardized, 5G aims to meet the requirements of both massive IoT and mission-critical IoT applications.

On the massive IoT side, the improved low power performance of 5G, the ability to operate in licensed and unlicensed spectrum, and its ability to provide deeper and more flexible coverage should result in significantly lower costs. On the mission-critical IoT side, the potential of 5G to support applications requiring high reliability, ultra-low latency, strong security and availability opens up opportunities in areas like autonomous vehicles and the remote operation of complex automation equipment.

Ahead of 5G roll-out, operators are taking advantage of the enhancements to 4G LTE in 3GPP Release 13, which was ratified in 2016, to address massive IoT low power wide area network (LPWA) applications, like asset management and logistics and infrastructure and environmental monitoring.

To date, T-Mobile US and Sprint have not been as aggressive as their larger competitors in deploying networks optimized for massive IoT uses cases, narrowband-IoT (NB-IoT) and Long Term Evolution for machines (LTE-M). Both AT&T and Verizon launched nationwide LTE-M networks in the first half of 2017. T-Mobile US launched a commercial NB-IoT network in October 2017 and aims to hit nationwide coverage in the middle of this year. Sprint has yet to launch either LTE-M or NB-IoT, though it plans to commence deployment of both technologies this year.

The four leading cellular operators also face increased competition in IoT, not only from Senet, Silver Spring Networks and other IoT specialists, but also from Comcast, Cox Communications and DISH Network. Comcast launched its machineQ venture in 2016. As of May 2018, it had expanded its LoRa network to 10 US cities. It is targeting use cases like asset tracking, environmental monitoring, lighting control and utility metering.

Satellite TV provider DISH Network, which has acquired wireless spectrum in several auctions in recent years, plans to complete the first phase of its NB-IoT network in March 2020. Cox Communications launched its own connected asset services business line, Cox2M, in March 2018. Unlike its competitors, Cox has not deployed its own LPWA network, but will bundle third-party connectivity — licensed or unlicensed based on customer requirements — with its own platform and third-party or customized hardware. Cox is targeting a variety of use cases, such as asset tracking, smart cities and smart agriculture. Its first commercial customer, Cox Automotive brand, Manheim, is using Cox2M to track approximately 500,000 vehicles across auction lots in North America.

Moving up the stack

According to the “Low Power Wide Area Interim Market Update Report – 2017” from IHS Markit, global public LPWA connections will grow at a compound annual growth rate (CAGR) of more than 200 percent between 2014 and 2021. However, as both licensed and unlicensed technologies mature, annual average revenue per user (ARPU) per connection will erode over the forecast period.

In order to scale up IoT revenues, operators will need to pursue a broader IoT strategy that goes beyond connectivity into IoT platforms, vertical offerings and ecosystem orchestration. By pre-integrating partner platforms, hardware and sensors into their IoT offerings, operators can make it easier for enterprises to plan and budget for IoT projects.  Working with system integrators, distributors and other partners can also give operators access to vertical expertise and exposure to operational-technology (OT) decision-makers they might otherwise lack. 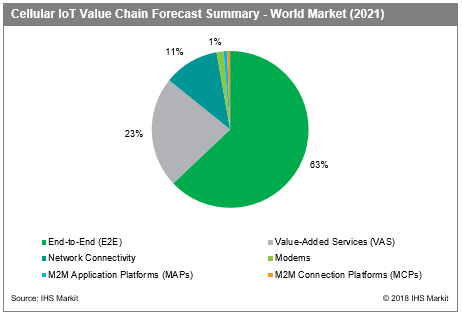 Within the US market, AT&T and Verizon are leading the way among operators — moving from connectivity to platforms and services. This shift has been partly built on in-house development of platforms such as Verizon’s ThingSpace and the AT&T IoT Platform, as well as the engagement of the developer community. For Verizon, strategic merger and acquisition activity has played an important role in driving up IoT revenues to $1.5 billion in 2017. Examples include acquisitions in telematics and fleet management (e.g.,Telogis and Fleetmatics), smart cities (e.g., Sensity and LQD WiFi) and drone management (e.g., Skyward).

T-Mobile US and Sprint parent companies, Deutsche Telekom and SoftBank, boast extensive IoT capabilities and ambitions. Deutsche Telekom not only has systems integration expertise through T-Systems, but also has developed its own vertical platforms, including the Qivicon smart home platform it licenses to other operators. For its part, Japan’s SoftBank is seeking to drive the development of the IoT forward, through the acquisition of semiconductor design company ARM, and the creation of the $100 billion Vision Fund, with the Public Investment Fund of the Kingdom of Saudi Arabia, and other investors.

To date neither T-Mobile US nor Sprint have ostensibly leveraged the expertise and scale of their parent companies in IoT. As in the consumer mobility space, T-Mobile US has pursued an “uncarrier” strategy with IoT: at $6 per year for up to 12 megabytes (MB) per connected device, its initial NB-IoT plans launched in January 2018 were firmly designed to undercut the LTE-M pricing of AT&T. This approach has arguably crossed the Atlantic, to drive innovation in Europe. In February 2018, Deutsche Telekom and the IoT mobile virtual network operator (MVNO) 1NCE launched a 10-euro-for-ten-years plan for NB-IoT devices, based in the European Union, Norway and Switzerland.

SoftBank’s investment in IoT, and the related areas of artificial intelligence (AI) and robotics, is for the long term. Innovations such as Kigen (announced by ARM in February 2018), which integrates a microcontroller unit (MCU), cellular modem and integrated SIM (iSIM), ARM’s enhancement to embedded SIM specification, GSMA, into a single system-on-a-chip (SoC), will help lower costs for device makers. These innovations will also give operators greater flexibility in how they charge for services, for example, based on the battery life of a device. Other SoftBank initiatives around autonomous driving and robotics will similarly help propel ecosystem development for the long-term benefit of operators.

In the nearer term, following integration efforts, the combination of T-Mobile US and Sprint will bring greater resources and expertise to their IoT activities, bolster network coverage and create more cross-sell opportunities. 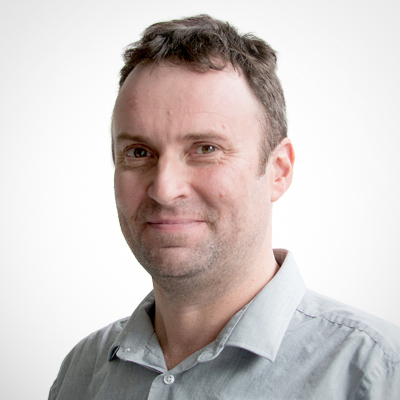 Julian joined Omdia (formerly IHS Markit) in 1999. His areas of syndicated and custom research include cellular IoT gateways, edge computing in IoT, 5G use cases, and IoT in retail applications. Prior to joining Omdia’s IoT team in 2006, Julian managed the legacy IHS Markit telecoms operator research team that provided syndicated and custom research on quad-play bundling, telecoms regulation, fixed broadband, and VoIP. Julian has a Bachelor of Arts in politics, parliamentary studies, and Russian from the University of Leeds in England.