The fingerprint sensors market is facing a major disruption following the introduction of Face ID, a facial recognition system designed and developed by Apple Inc. for its iPhone X, along with the forthcoming arrival of in-display sensors and Chinese vendors winning market share from Western vendors.

Following is information and insight from IHS Markit about our latest Fingerprint Sensors Overview Report.

This latest biometric shake-up is leading the sensor industry into a time of significant threats and opportunities.

Fingerprint sensor suppliers now have to deal with significant internal disruption within the market for fingerprint sensors itself. As the market moves to under-glass sensing, ultrasonic and optical sensors will replace capacitive sensors that cannot send signals through glass.

Qualcomm already had at least two ultrasonic design wins in 2016, with Xiaomi and LeEco; while Synaptics recently announced its first optical-sensor design win. Further announcements can be expected to follow on this front throughout 2018.

Over the next two-to-three years, the fingerprint sensor market is likely moving toward a true “in-display” solution, where the sensor is not just under the display, but also integrated into the display itself. These sensors will likely be able to recognize fingerprints in a large area of the display or even the entire display, rather than solely on a fingerprint-sensor button.

In the early years of the fingerprint sensor market, Synaptics and Fingerprint Cards dominated — especially from 2014 through 2015. Although they comprised most of the shipments, Apple, which is purely a captive market, was also one of the leading producers. However in 2016 and 2017, new competitors also entered the market and gained share.

Goodix is the largest of these companies, and it is challenging Fingerprint Cards for the lead position in the market in 2017. Silead has also won share in China in 2016 and 2017, while Egistec has gained design wins at Samsung. (Note: Final 2017 rankings will be completed by IHS Markit, by the end of the first quarter 2018). In 2018 there may also be newcomers to the market, such as InvenSense, which was acquired by TDK.

Recent competition has driven commoditization in capacitive sensors, leading to lower packaged sensor prices, which fell under $2 in 2017.

The market for fingerprint sensors in mobile phones is not forecast to grow as quickly as it did in 2015 and 2016. In fact, revenue and profits are actually forecast to decline through 2021.

Other fingerprint sensor markets expected to grow in the future include automotive and door locks, which could turn out to be big long-term opportunities for the industry. 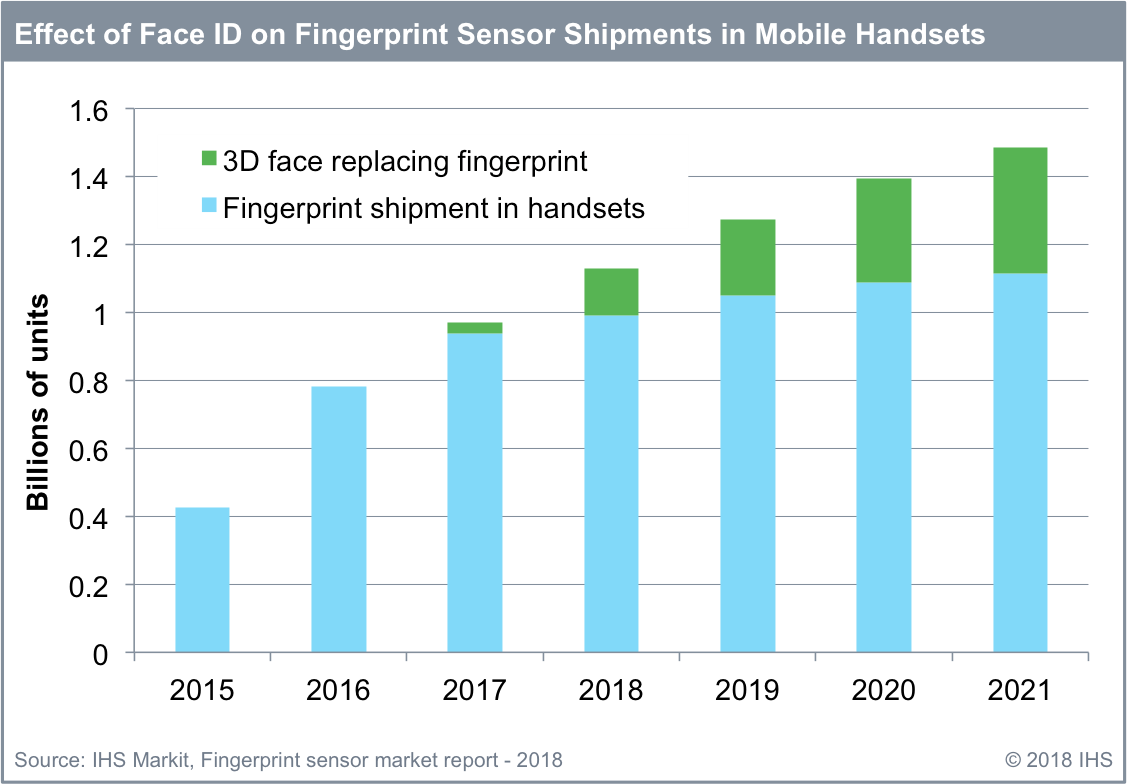 This report tracks the market for fingerprint sensors in mobile handsets, tablets and notebooks, and covers the impact of other biometrics such as Apple’s 3D face technology. It contains market shares in both units and revenues for 2014 to 2017 and profiles of many suppliers. The report presents unit shipments, revenues and average selling prices (ASPs), showing data by end device—mobile phones, tablets and notebooks.