Highlights from the 2018 show in Vienna, including two IHS Markit presentations and the latest thinking on IoT for Utilities.

From November 6th-8th, over 12,000 attendees and 600 exhibitors gathered at European Utility Week this year in Vienna. The event routinely serves as one of the best opportunities of the year both to catch up on the latest developments in the industry, and to share visions for where it’s headed.  Four members of the IHS Markit Energy Technology team travelled to the conference to better understand that future, including David Green presenting at the Digitalization hub session and Sam Wilkinson at the Energy Markets session.

Elsewhere across the show, the main focus from the IHS Markit perspective seemed to focus on the development of IoT (both real and perceived), a focus on cost and not technicality for connectivity, and the growing murmurs of blockchain.

IoT is here but lacks a shared meaning

IoT has long been at the center of discussion for European Utility Week, but this year some of the messaging changed – IoT is no longer just an idea, but a reality. However, as each question gets answered, ten more questions appear in its place.

No two companies or utilities share the exact same definition for IoT, or seem to realise that AMI adoption has already shown the path forwards. IHS Markit uses the four foundational pillars to define IoT: Connect, Collect, Compute, and Create. Connect refers to connectivity and processing capabilities that are embedded into devices, which in turn gives end users the capability to add the necessary infrastructure to collect data. Once those two pillars are in place, the compute pillar enables collected data to be processed (from central clouds to the edge). Only then can unique solutions be created to provide value for stakeholders.

Click here to watch us talk over this concept more on our video interview with the European Utility Week team.

Ultimately, the actual product offerings (hardware, software and services) at EUW haven’t dramatically changed for the last three years. Instead, the conversation has now shifted away from how to connect devices and collect data, and towards how to leverage it. That’s great news for software and service offerings, but one conflict remains – namely, that many vendors promote technologies, while utilities care about solutions.

Connectivity by cost, not technicality

The strongest narrative from EUW16 and EUW17 often centered on the transportation of data – for instance, who would win the race between LoRa, SIGFOX and NB-IoT?  In 2018 that question still remains unanswered, but in fact could have been the wrong question all along.

Overall, there seems to be a disconnect between how providers are framing their products and what utilities want. The reality is that no single technology will become overwhelmingly dominant because utilities typically don’t have the technical knowledge to care, and they are paralyzed by the number of options to choose from – they simply want a solution. 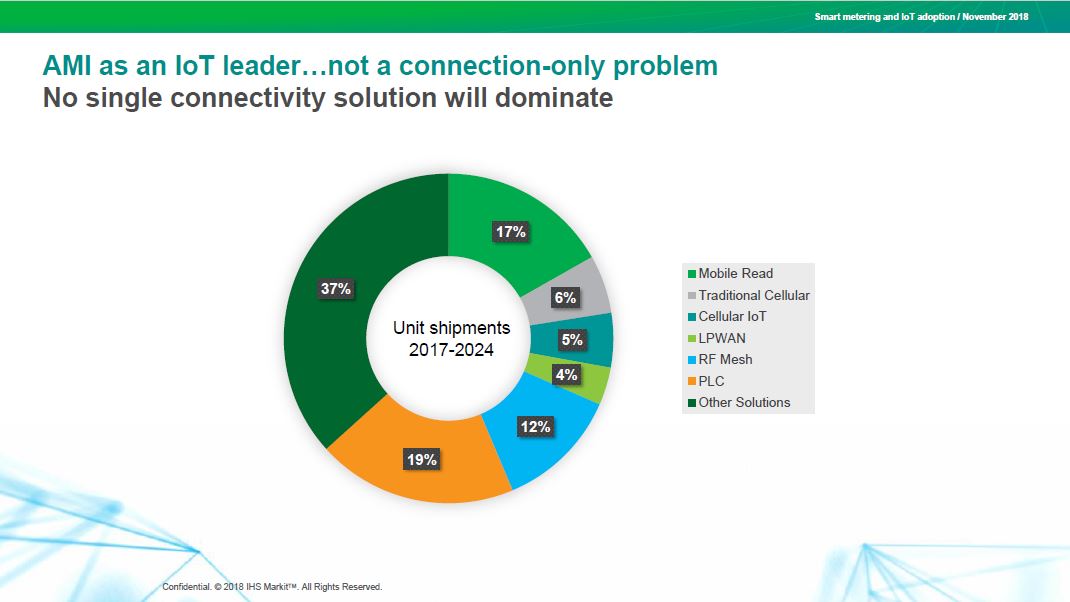 The technical benefits of various technologies are not typically driving utilities to prefer any one solution over another – i.e. it matters less which exact technology is used and more about what the data itself can be used for by the utility.

Utilities are increasingly placing how a problem is solved in the hands of vendors – and given free reign, vendors are tending to choose connectivity based on the most cost-effective option. In terms of the show floor in 2018 it meant less prominence for the various communication standard logos and more space for the outcomes and solution diagrams.

A blockchain murmur, but not yet a buzz

Many industry shows even far outside of utilities are seeing blockchain emerge as the big buzzword for 2018, but it seems the utility industry might be showing a flash of caution based on these 3 days in Vienna.

Many of the summit and hub presentations mentioned the topic, but most time was spent on the general concepts and trying to divorce the blockchain technology from its popular cryptocurrency applications such as bitcoin.  The substance behind the blockchain conversation centered on regulatory environments, energy trading, and cyber security but not much more.  No doubt 2019 will see a much bigger splash across the show floor.

For the utility industry, it’s still very much one step at a time through IoT and beyond.