Annual shipments of smart electricity meters exceeded 100 million units for the first time in 2017, whilst total meter shipments reached 170 million. However, with many rollouts peaking in 2020 the market is increasingly looking to AMI managed services and software next.

Annual shipments of smart electricity meters exceeded 100 million units for the first time in 2017, whilst total meter shipments reached 170 million.  With almost $5 billion generated annually by meter manufacturers just for hardware and increasing sales of related software and services, the Advanced Metering Infrastructure (AMI) technology wave is set to continue even as some major rollouts begin to peak in the coming years. 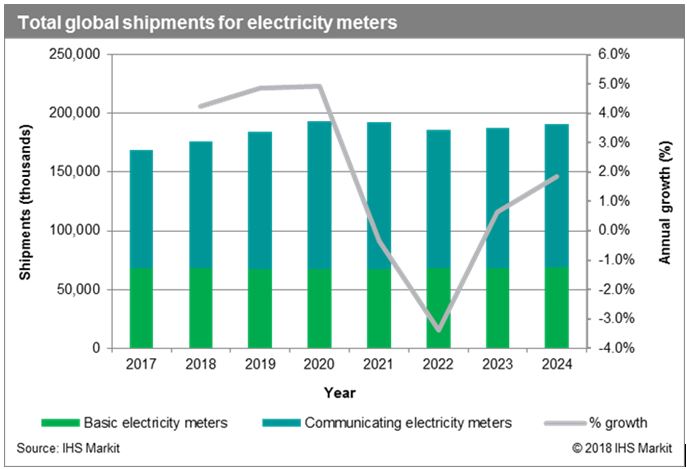 According to the latest IHS Markit Electricity Meters Report, Asia Pacific remains the largest region for smart electricity meter shipments driven by the huge volume in China.  However, individual national rollouts beyond China are increasingly shifting the regional trend – for example with the Japanese projects looking to complete within the forecast period and accounting for 13% of shipments in Asia Pacific overall.  More recent developments in South Korea and India in particular also look to be providing the next centers for growth as manufacturers look to expand their reach.

EMEA making moves in the midterm

Whilst not the largest region by current volume, some of the most diverse and interesting stories are found in Europe, Middle East and Africa.  One in five smart electricity meter shipments are made to EMEA at present but the region has some of the highest adopting countries of smart meters (compared to basic) as they lead the technological charge.

However, this brings both good and bad news to the forecast for smart meter shipments overall.

The good news is that IHS Markit forecasts smart meter shipments will continue growing, reaching a peak of over 125 million units globally in 2020. This peak is largely the result of national smart meter deployments in many European countries, with France and the United Kingdom driving the strongest growth at present. In France, the Linky project to replace old meters with standardized G3 PLC smart meters is being carried out on schedule. In the United Kingdom, SMETS1 program deployments have still been driving market growth up to now, despite the implementation of the SMETS2 program on the horizon (as it continues to be delayed).  IHS Markit still expects strong growth in the United Kingdom but the risk to the forecast becomes greater as the implementation of SMETS2 continues to be delayed.  In addition, growth in Europe will continue in the coming years as other EU countries such as Italy and Sweden also move through national smart meter rollouts.

The potential bad news is that many of these national rollouts will peak or complete around 2020, following which overall unit shipments of smart meters will naturally fall.  The gap between this fall and the next wave of shipments is then a question of replacement cycles as some of the early generations of AMR begin to be replaced with second generation AMI systems.

This is one of the many reasons that utilities and vendors alike are looking to the future of AMI-related software and services.  For vendors, it’s about moving away from the hardware-only business models and cementing their place as the solution provider and technology partner of the utility.  For the utility, the opportunity to take advantage of ‘as a service’ business models means a reduction in risk for adopting (and keeping pace) with new technology.

Indeed IHS Markit predict over $58 billion will be spent on meter-to-cash focused AMI solutions by utilities between 2016 and 2023, with an increasing proportion being spent on the non-physical aspects of the system – software and managed services.  Regionally, North America and Europe show the strongest signs of moving towards managed services, with “Network as a Service” in particular driving a large proportion of the forecast $548 million spend on AMI managed services in Europe and $410 million spend in North America from 2016-2023.

As the initial meter hardware rollouts look to peak in the coming years, expect to see even greater focus on the value-add services from both utilities and vendors once the replacement cycles ramp up from 2020 onwards.

Click the following link for more information on the insights available from the IHS Markit Smart Utility Meter Intelligence Service.