Chinese brand TCL surged to the top of the North American TV market for the first time ever during the first quarter of 2019, as unit shipments boomed by 112 percent year-over-year.

Chinese brand TCL surged to the top of the North American TV market for the first time ever during the first quarter of 2019, as unit shipments boomed by 112 percent year-over-year.

TCL’s share of North American TV shipments rose to 26.2 percent during the first quarter of 2019, up from 16 percent during the same period in 2018, as reported by the IHS Markit TV Sets Intelligence Service. This put TCL one position ahead of previous market leader Samsung, whose shipment share declined to 21.8 percent, down from 28.0 percent one year earlier. Vizio ranked third in the North American TV shipment ranking, with a 13.7 percent share.

Despite TCL’s rise, Samsung maintained a commanding lead in terms of revenue, accounting for a 36.9 percent share, more than double the total of any other company. Samsung’s revenue leadership reflects its focus on TVs with larger sizes and higher price points.

“Amid rising concerns about tariffs arising from the U.S. China trade dispute, TCL and other TV brands that rely heavily on China-based manufacturing have been increasing shipments dramatically,” said Paul Gagnon, research executive director at IHS Markit. “As uncertainty mounts around a possible tariff-driven rise in costs, these brands have been bolstering shipments to protect against any potential disruption. Given that margins for TVs are relatively low compared to other consumer-electronics categories, any tariff increase would have a major impact on sales.” 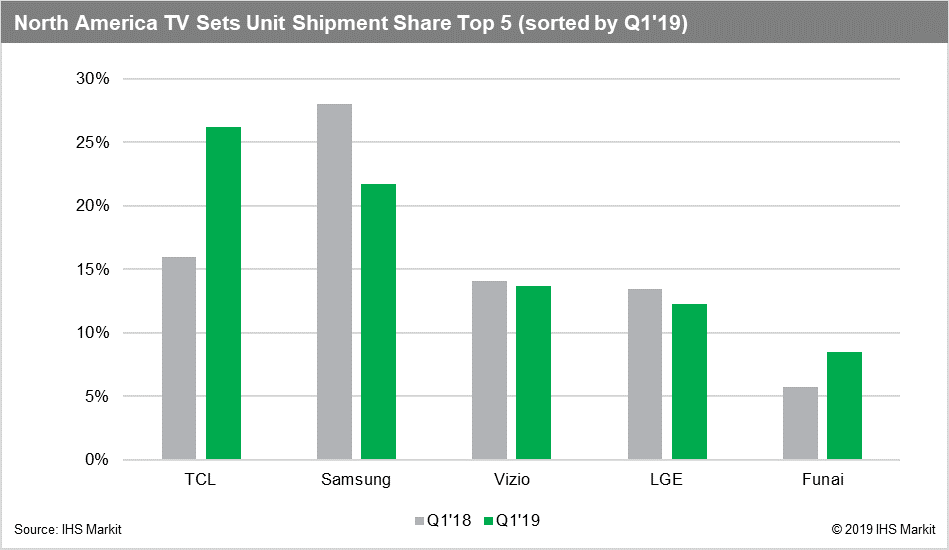 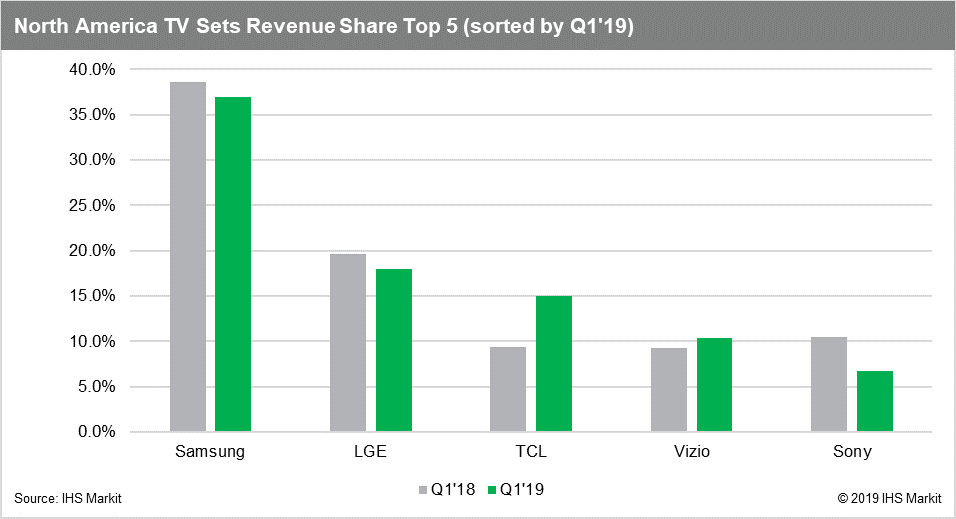 Shipment growth was boosted by an acceleration of retail price erosion, especially for larger sizes. However, the rise in TV shipments in North America was mostly driven by sets with screen sizes smaller than 55-inches.

The erosion in LCD-TV average selling prices (ASPs) in North America reached a high level of intensity in the first quarter. In fact, the first quarter marked the first time that the average price-per-inch of an LCD-TV fell below $10. The overall average price of a 65-inch LCD TV declined to nearly the same level as during the fourth quarter of 2018, when TV prices dropped because of holiday season sales.

The 55-inch average price was near $500, lower than during the fourth quarter of 2018. Amid this high level of LCD-TV ASP erosion, OLED TV shipments have now fallen year-over-year for the second straight quarter.

In China, the world’s largest TV market, Xiaomi remained in first place for the fourth consecutive quarter, reaching a record shipment share of more than 19 percent in the first quarter. This represents the highest single quarterly market share posted by any Chinese brand in China in more than six years.

Xiaomi achieved this growth through disruptive market pricing and a direct-to-consumer business model that reduces distribution channel costs and passes the savings along to consumers. Xiaomi had the lowest ASP in China of any Chinese TV brand during the first quarter.