The expected growth in sales during the coming years will generate soaring demand for uCPE processor chips, with revenue set to rise to $327 million in 2023, up from a mere $7 million in 2019.

It’s said that the universe started as an infinitesimally small point before it expanded explosively to become the enormous space it is now. The same can be said about universal customer premises equipment (uCPE), a new breed of network infrastructure gear that had modest beginnings, but now is undergoing rapid expansion. The expected growth in sales during the coming years will generate soaring demand for uCPE processor chips, with revenue set to rise to $327 million in 2023, up from a mere $7 million in 2019.

uCPE is a new category of networking equipment, tracing its roots back to just 2016, when the first products were introduced mainly as an experiment. These devices take capabilities typically performed by several distinct systems—such as routers, firewalls and wireless LAN controllers—and combine them into a single piece of software-configurable equipment. uCPE has found increasing market acceptance by providing a complete pico-cloud, incorporating compute, storage and switching features capable of performing virtualized network functions.

By using just one piece of hardware, businesses can reduce the costs associated with procuring and operating multiple devices. uCPE also can eliminate many appliances that are complex to install and maintain, replacing them with virtual network functions in software.

The universe and the microcosm

Because of its embrace of software-based functionality, uCPE can be seen as a microcosm of the network infrastructure market as a whole, where control functions are being virtualized and packet-forwarding is becoming more specialized. To support this move to virtualization, uCPE devices are increasingly employing sophisticated application-specific logic coprocessors and powerful 64-bit microprocessors as their main compute processors.

uCPE is also a strong candidate for higher performance processors and coprocessors that may include support for greater analytics capabilities. These include general-purpose graphics processing units (GP-GPUs), which will see shipments rise to 1.3 million units in 2023, up from negligible levels in 2019.

IHS Markit forecasts application-specific logic coprocessor prices may begin to suffer from the effects of commoditization in the long term, with the wide availability of choices pushing average selling prices lower and lower.

A galaxy of competitors

With all this opportunity for revenue, many mainstream OEMs already have uCPE products, including Dell, Ciena, HPE, Juniper and Huawei. However, smaller-name manufacturers are also rushing into the market.

With the large variety of uCPE players, suppliers of all types of processors are likely to find opportunity in this burgeoning market. 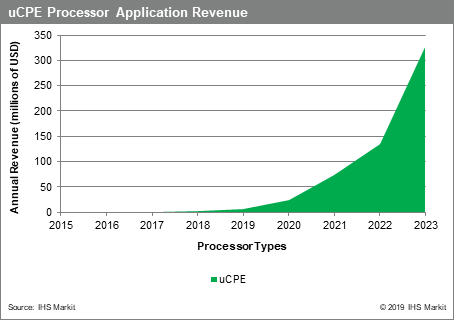 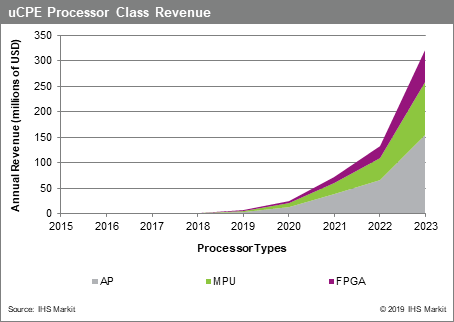