IHS Markit recently surveyed 100 North American enterprises that are evaluating or implementing software-defined networking (SDN) for the data center by 2020. Respondents currently evaluating SDN expect that it will drive operational- and capital-expenditure decreases at a faster pace than what has been experienced by those already deploying SDN.

IHS Markit recently surveyed 100 North American enterprises that are evaluating or implementing software-defined networking (SDN) for the data center by 2020. Respondents currently evaluating SDN expect that it will drive operational- and capital-expenditure decreases at a faster pace than what has been experienced by those already deploying SDN.

“Migrating to SDN means deploying new equipment, upgrading existing equipment, and training IT staff, which requires investment,” said Josh Bancroft, senior analyst, cloud and data center research, IHS Markit. “Those evaluating SDN need to adjust their expectations that savings might not be felt immediately, but instead might happen over a longer period of time.”

The 2018 “Data Center SDN Strategies North American Enterprise Survey” indicated that the transition to live SDN deployment is well underway. By the end of 2019, 74 percent of respondents will be in production trials, and 36 percent will be in live production, up from 38 percent and 20 percent, respectively, in 2018. Enhancements have been made by vendors, including integrating network analytics to improve application performance and security. Doing so will encourage enterprises to deploy SDN, since improved application performance and improved security were two of the top drivers for deploying SDN. Other top deployment drivers for SDN included; decreased operating costs, simplified network provisioning and improved management capability.

In the IHS Markit survey, Cisco, VMware, and Dell EMC were identified as the SDN hardware and software manufacturers with which respondents were most familiar. 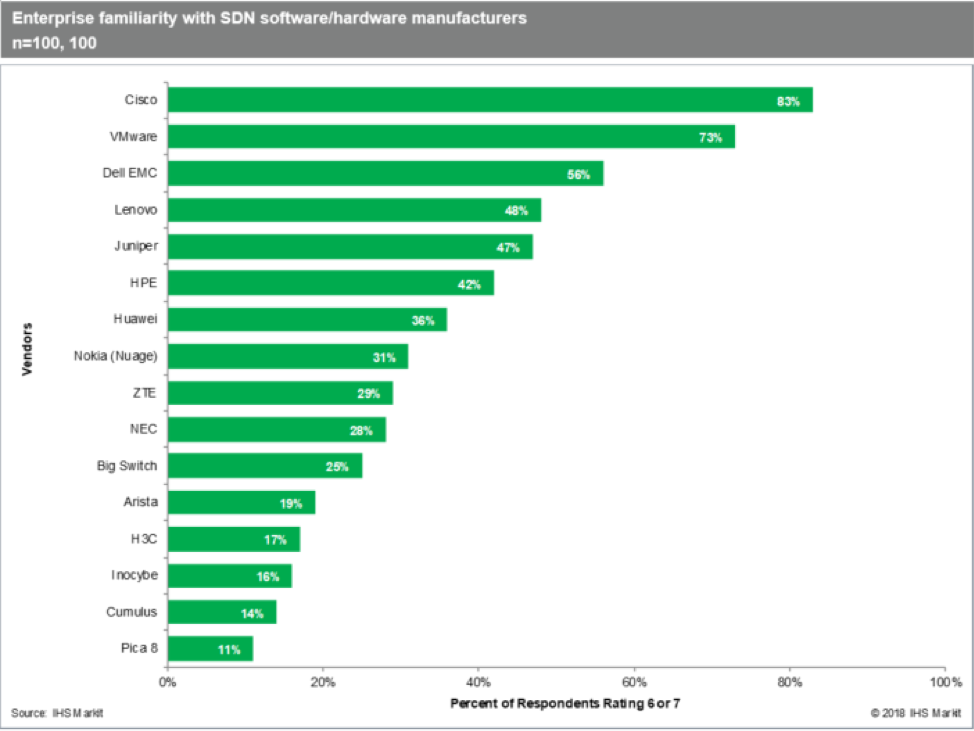 Following are some additional highlights from the survey:

This IHS Markit survey analyzes the trends and assesses the needs of enterprises deploying SDN in their data centers. The study probes issues defining how the enterprise market will evolve with data center SDN, including deployment drivers and barriers, rollout plans, applications, use cases, vendors installed and under evaluation, top rated vendors, and more.