Handheld systems are the future of ultrasound, but are the startups?

The drastic growth of the handheld ultrasound equipment market is a result of a shift toward smaller and smarter medical imaging technology. From 2016 to 2017, handheld revenues grew over 18%, outpacing all other ultrasound product categories. Handheld ultrasound systems have been on the market for nearly a decade and are now booming due to numerous growth drivers, including portability and affordability, and solutions to previous obstacles, like insufficient image quality and lack of technological infrastructure and training.

Ultrasound is becoming smaller and smarter

The drastic growth of the handheld ultrasound equipment market is a result of a shift toward smaller and smarter medical imaging technology. From 2016 to 2017, handheld revenues grew over 18%, outpacing all other ultrasound product categories. Handheld ultrasound systems have been on the market for nearly a decade and are now booming due to numerous growth drivers, including portability and affordability, and solutions to previous obstacles, like insufficient image quality and lack of technological infrastructure and training. 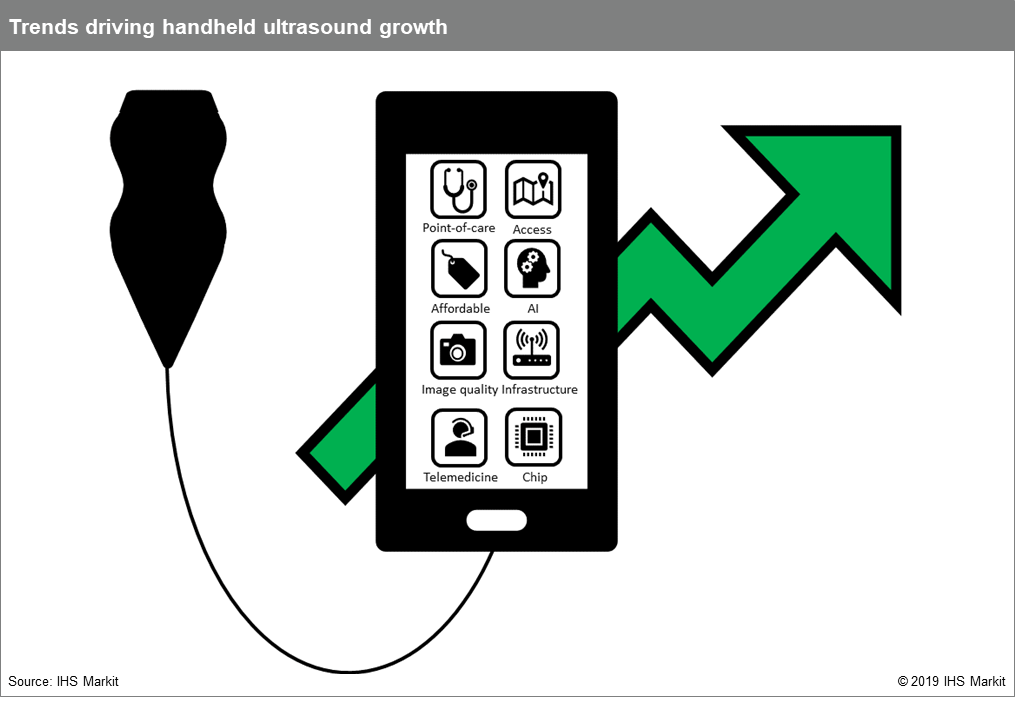 Much of the handheld market’s growth can be attributed to the increase in point-of-care and primary care imaging. Healthcare is migrating away from traditional hospital settings and closer to the patient. Ultrasound systems are more common in outpatient centers, doctors’ offices, and clinics than ever before, leading some to speculate they will migrate into the home soon. Small, portable, inexpensive handheld products have made this migration possible. These handheld systems are improving patient access to ultrasound technology, especially in underserved markets where healthcare resources are limited. Serving these populations has always been a priority for healthcare providers, but ultrasound systems were mostly clunky and expensive until recent years when manufacturers began launching mobile systems.

Technological advancements have allowed these systems to be used effectively with less training. For example, some handheld systems acquire images at a single depth, which allows for post-scan manipulation, eliminating the need for technicians to manually adjust scanning depths. Certain AI programs automatically adjust handheld system settings and provide real-time feedback. These programs aim to improve image quality by providing personalized parameters and guided instructions for each scan. Additionally, many handheld systems are equipped with telemedicine capabilities, which allow technicians to perform scans under the watchful eye of remote radiologists via video chat. The technicians can then send the scans to these more experienced radiologists for interpretation. Telemedicine reduces the need for highly trained radiologists, thus addressing personnel shortages and unbalanced resource distribution. Handheld ultrasound systems are not as advanced as cart-based or premium compact systems, but they are flourishing in the growing point-of-care space thanks to these recent technological developments.

Startups are shaking up the market

In 2017, major medical imaging manufacturers GE Healthcare, Philips Healthcare, Siemens Healthineers, and Fujifilm Sonosite accounted for nearly 80% of global handheld ultrasound revenues. While this large combined share may give the market the appearance of stability and control; in recent years, the handheld market has become a battleground between veteran imaging giants and ambitious tech startups. 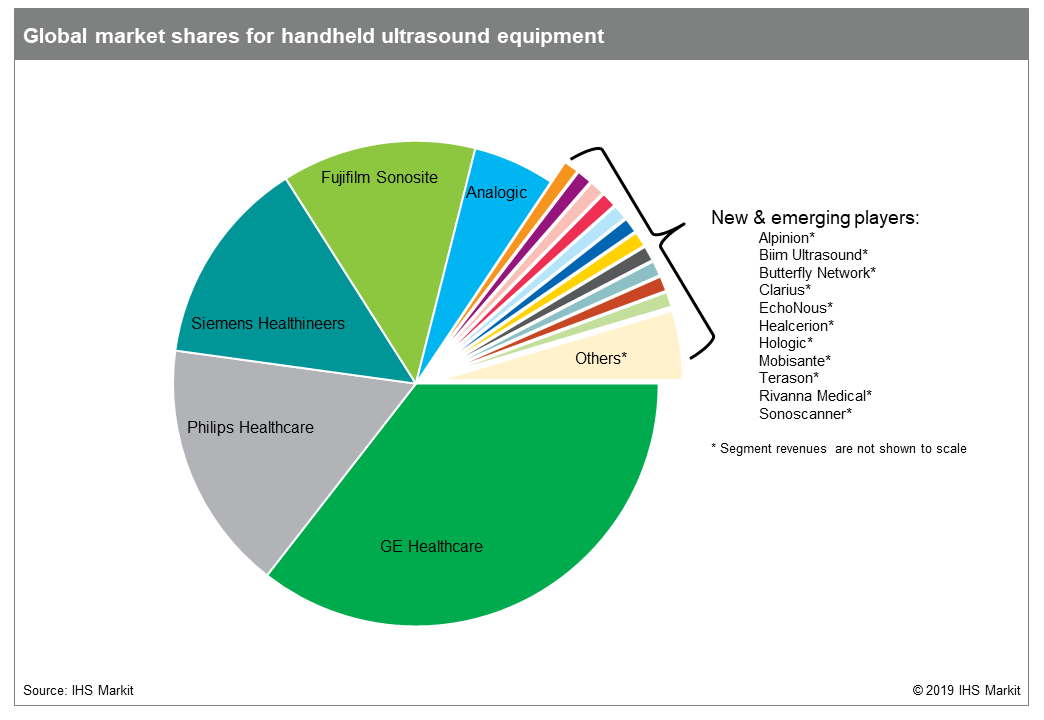 From 2016 to 2017, a handful of startups entered the market and grabbed approximately 15% of market share from the top companies. The strong sales networks and reputations of the major manufacturers are being challenged by the innovative technology, low price points, and hype surrounding emerging players.

Among the handheld startups, Butterfly Network has generated the most buzz. In 2017, Butterfly Network launched the Butterfly iQ, a full body scanner utilizing a silicon chip, which allows for a single probe to be used for many clinical applications. 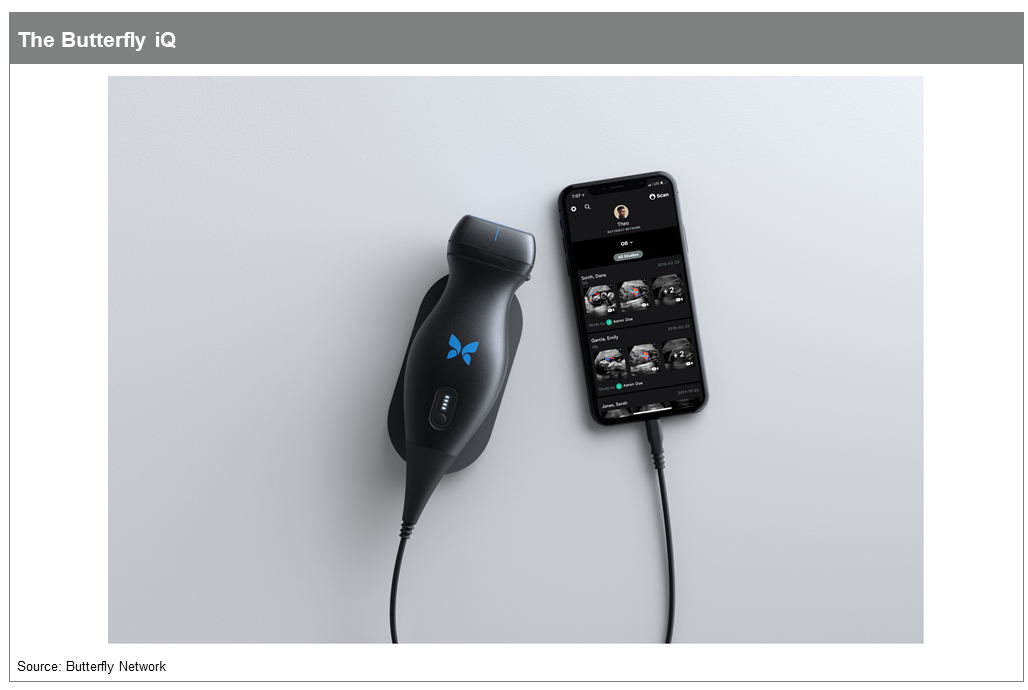 While the Butterfly iQ is being sold on the very low-end of the ultrasound price spectrum, a growing list of startups are also selling handhelds for well below the typical $8,000 to $12,000 price tags of the large manufacturers’ systems.

Startups undercutting prices has left medical imaging giants reeling, but it is uncertain if this strategy is sustainable and scalable. Nonetheless, low prices have proven fruitful in the short term in generating publicity and increasing investor value for startups. The mission statements of the emerging players are fraught with ambitious statements about handheld ultrasound “democratizing healthcare”, “replacing the stethoscope”, and living “in every household”, but these goals may be too good to be true. Are these nascent companies aiming for buyouts and licensing deals instead of working to establish themselves as standalone market players?

In 2018, Hologic, a leader in women’s health imaging, partnered with handheld ultrasound producer Clarius to re brand and sell the Clarius L7 as the Viera. Such a partnership allows for Hologic to fill a gap in its imaging portfolio and provides Clarius with greater funding and market access than previously available. Mutually beneficial deals like this one are common in other technology markets. Buyouts and licensing agreements are a viable option for tech startups. It is an enormous task to grow from the ground up to directly challenge the Apples, Amazons, and Microsofts of the world.

Additional partnerships and acquisitions seem imminent, but whether a handheld startup has the master plan, cutting-edge technology, and gusto to take on the likes of GE and Philips is still to be seen. Nonetheless, the growing competition and innovation in the handheld space is undoubtedly shaking up the ultrasound landscape.