Survey: SDN deployed by 78 percent of global service providers by the end of 2018

Service providers are in the early stages of a long-term transition to software-defined networks (SDN), according to the sixth annual “Carrier SDN Strategies Service Provider Survey” in 2018 from IHS Markit. Various barriers and drivers have become more prominent, as operators get closer to commercial deployment, although the barriers remain. These barriers include the problem of products that are not carrier grade and difficulty with integration into existing networks.

Service providers around the globe – representing 44 percent of worldwide telecom capital expenditure (capex) and 44 percent of revenue – are investing in software defined networks (SDNs) as part of a larger move to automate their networks and transform their internal processes, operations, and the way they offer services to their customers. Providers view SDN as a key technology underpinning the fundamental changes in telecom network architecture that delivers benefits in new service agility, quicker time to revenue, automation, operational efficiency, and capex savings.

Many operators have some parts of their networks running under SDN control. The rest are moving from their proof-of-concept (PoC) investigations and evaluations for SDN toward commercial deployments in the tail end of 2018 and 2019.

The top two reasons service providers are investing in and deploying network SDN are the following:

The majority of service providers are investing in SDN in order to simplify and automate the provisioning of their networks for end-to-end network and service management and control—with the goal of having a global view of network conditions across the various vendors’ equipment, network layers, and technologies. SDN figures in provider plans to generate revenue, with multi-cloud and network slicing for applications and IoT figuring more prominently this year.

Still, carriers will learn that some avenues are not as fruitful as expected, and telecom equipment manufacturers and software suppliers may well invent new approaches that open up new applications. 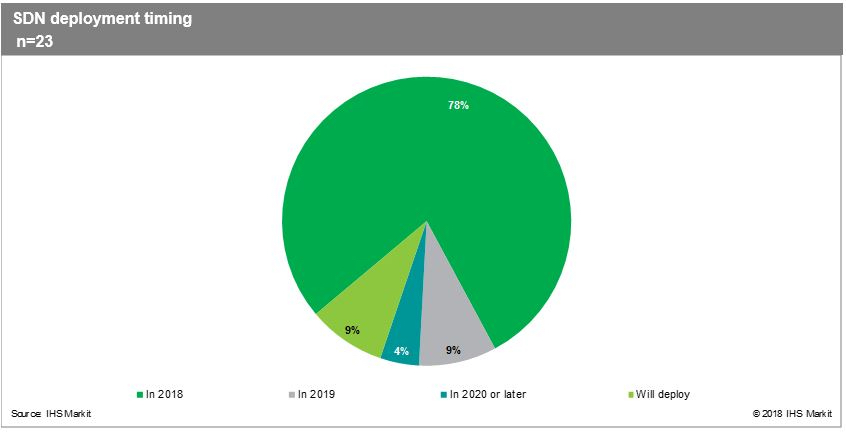 This sixth annual survey of global service providers explores plans and strategies of 23 operators for evaluating and deploying SDNs. The study identifies the drivers for this fundamental change in service provider network architecture and explores use cases, development stages, barriers, applications, target network areas, and timing of deployment plans.

This Survey is included in: