Water meters market to be one-third smart by 2025

The global water meters market totaled 118 million units shipped in 2017, of which one in every four meters had communications. New data from IHS Markit shows continued growth for the next five years.

The global water meters market totaled 118 million units shipped in 2017, of which one in every four meters had communications. Smart meters will grow to account for more than one-third of all unit shipments by 2025 as communicating meters continue to displace basic ones at increasing rates.

For the last decade the communicating water meter market has primarily grown in regions such as Europe and North America, where existing market drivers such as ageing infrastructure and high labor costs have made smart metering investments cost-effective. In new markets such as the Middle East, India, Australia and China, environmentally oriented policies and the declining cost of technology are starting to provide growth. However, Latin America continues to lag behind the rest, as technical and economic factors are pushing utilities away from more expensive, challenging technologies and towards cheaper options.

According to the new IHS Markit Water Meters Report, the overall global result is therefore one of increasing growth for the water meters market across the forecast period. 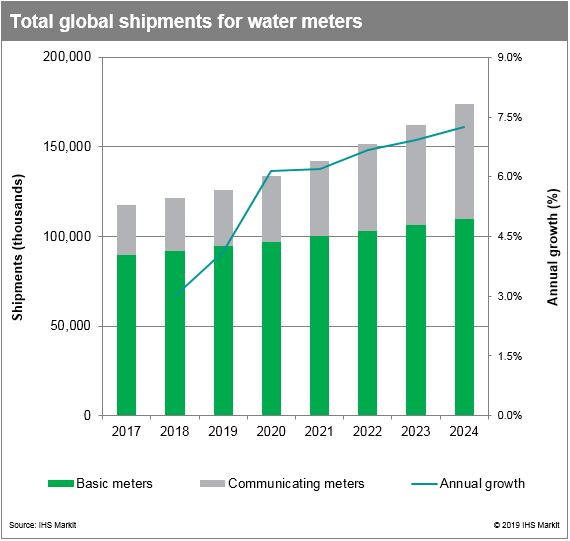 Whilst some considered Latin America to have high future potential for smart metering, the current reality is that utilities in the region tend to lack the same level of access to workforces with IT skills and training as in other regions. Combined with the growing presence of Chinese manufacturers offering low cost basic meters in markets (such as Brazil, Central America, Mexico, and various South American countries), utilities are pushing forward with the lowest possible cost options.

In contrast, the new IHS Markit forecasts show that global communicating meter shipments will more than double in size by the end of 2024. Asia Pacific is the most influential market behind this trend due to the overwhelming dominance of China globally. The continuous displacement of basic meters with communicating meters in China is largely driven by policies that support new network technologies and a growing middle class, which increases the cost of labor and strengthens the business case for automation. Nonetheless, the North American and EMEA markets still account for over 40% of communicating meter shipments in 2017 collectively and maintain growth over the long-term. In these more established markets, the conversation increasingly moves towards the total metering solution and related software/services as part of the utility’s investment.

No single technology will dominate the communications landscape of the future

One of the key considerations for the total metering solution is the connectivity technology, but the future communications market will be a hybrid landscape. Technical specifications are not necessarily the primary drivers of technology decision-making – the total cost of ownership is a larger factor (read more here). Moreover, cost is often strongly influenced by specific regional factors and thus the popularity of a technology tends to cluster by region: In China, NB-IoT will increase quickly because of state-backed initiatives and large investments by Huawei to build out the network; In Europe, the region had many pilots for LoRa meters in 2017/2018 and will start to see full scale projects rolling out by 2020; and in North America (where many utilities typically want to own their networks) fixed network categories such as RF Mesh continue to dominate the region.

In all cases, the increased focus on total solution and the ongoing rollouts in several key regions point to prolonged and strong growth for communicating water meters for several years to come.

This insight is from the IHS Markit Smart Utilities team, with data citations from the latest publication on the global water meters market. IHS Markit produces global data for the entire smart metering market in our Smart Utility Meter Intelligence Service.