Fibre Channel storage area networking continues to grow, but a slowdown is inevitable

A fortuitous mix of favorable market drivers and supportive industry trends helped spur the most recent wave of growth in the global market for Fibre Channel storage area network (FC SAN) equipment, according to a new IHS Markit report. Yet, demand for Fibre Channel storage is forecast to decelerate within five years as enterprises increasingly shift workloads to the cloud and to alternative storage technologies like Ethernet and InfiniBand.

A fortuitous mix of favorable market drivers and supportive industry trends helped spur the most recent wave of growth in the global market for Fibre Channel storage area network (FC SAN) equipment, according to a new IHS Markit report. Yet, demand for Fibre Channel storage is forecast to decelerate within five years as enterprises increasingly shift workloads to the cloud and to alternative storage technologies like Ethernet and InfiniBand.

Worldwide revenue for FC SAN equipment reached $755 million in the first quarter this year, the latest period for which full figures are available, as shown by the chart below. And while revenue was flat for the period compared to the fourth quarter of 2018, first-quarter YoY growth between 2018 and 2019 was solid at 23%.

These results and other findings can be found in my new report, Storage Area Network Equipment Market Tracker – Q1 2019. 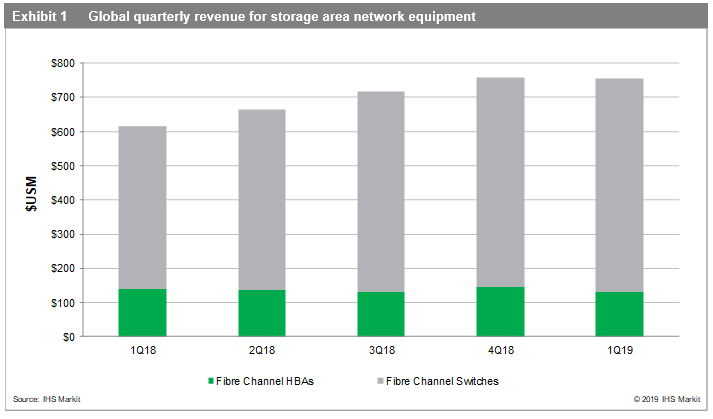 Broadcom kept its crown as FC SAN equipment market leader in the first quarter with an indomitable 75% share of total industry revenue. Broadcom in 2016 acquired Brocade Communications, creating synergies from the merger that continue to work in the company’s favor to this day. In second place with 14% revenue share was Cisco, followed by Marvell in third place with 8% share.

The FC SAN equipment market continues to do well for now, sustained by steady support from positive industry drivers, by vendors enhancing their fiber channel portfolios, and by the market’s support of advanced technologies.

Among the forces favorable to the FC SAN market, a strong contributor is the growing volume of enterprise data, generated from companies conducting Big Data analytics and running systems enabled with artificial intelligence or machine learning in their day-to-day operations. In turn, the explosion of digital data is invigorating the market for efficient data storage infrastructure in enterprises.

A second factor fueling FC SAN growth is the growing adoption of solid-state drives in storage arrays, with SANs leveraging the devices increasingly to speed up applications and improve performance without adding more servers and incurring cost.

A third agent of growth is FC SAN support of advanced technologies like telemetry and the specification known as non-volatile memory express over Fibre Channel, or NVMe-o-FC. The support is enabling the FC SAN market to recover ground lost to alternative technologies like Ethernet and InfiniBand, as well as to rival mechanisms like direct-attach storage.

Also helping to prop the market is FC expansion into new enterprise territories, such as Asia Pacific, which will partially offset declines in the mature regions.

Last, the increased availability of 32G–or gigabit-per-second—port solutions, and the expected introduction this year of 64G, will help keep the FC market stable not only in the present but also in the years to come.

Although immediate and short-term prospects in the FC SAN space are healthy, the long-term picture is less promising because of continuing downward pressure from competing storage technologies. By 2023, a slowdown will be in place as enterprises move storage and other workloads to the cloud, impacting demand for FC storage and depressing market growth as a result.

The Storage Area Network Equipment Market Tracker is part of the Cloud & Data Center category, under the Enterprise & IT research service. Contact us for more details or if you wish to become a subscriber.

As always, I welcome your feedback. 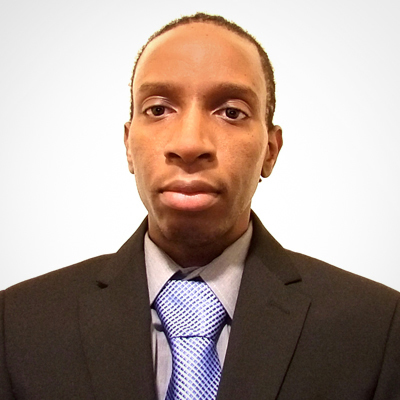 He has more than a decade of experience in network product management, marketing, telecommunications, and cloud market research. Prior to joining Omdia, he was a market analyst at Infonetics Research, where he played an instrumental role in developing Infonetics' first off-premises cloud intelligent service. During this time, he also developed and helped to manage intelligent service deliverables for data center networks, storage area networks, and software-defined networks.

Devan holds a Bachelor of Science in electrical engineering, with a minor in mathematics, and an MBA, with market research specialization, from the University of Cincinnati, US.