As the world’s population continues to concentrate in urban areas, smart cities are increasingly viewed as the holy grail toward easing the deleterious effects of urbanization. Yet a formidable array of tasks and challenges confronts every would-be planner, builder, and investor of the smart city. Securing city-level government investment, for instance, is a major undertaking. Substantial upfront costs are also often required, proving a deterrent for many cities. Important to the success of any smart city initiative, however, are two vital components: the appropriate type of investment, and a viable strategy for funding.

As the world’s population continues to concentrate in urban areas, smart cities are increasingly viewed as the holy grail toward easing the deleterious effects of urbanization.

Yet a formidable array of tasks and challenges confronts every would-be planner, builder, and investor of the smart city. Securing city-level government investment, for instance, is a major undertaking. Substantial upfront costs are also often required, proving a deterrent for many cities.

Important to the success of any smart city initiative, however, are two vital components: the appropriate type of investment, and a viable strategy for funding.

These are some of the findings that can be found in the latest IHS Markit report, Funding models for smart cities – 2019, part of the Smart Cities IoT Intelligence Service that examines the technologies, industry players, and market dynamics underlying smart cities.

As defined by IHS Markit, a smart city project is one that utilizes information and communication technology (ICT) to improve efficiency, manage complexity, and enhance the quality of life of citizens, resulting in the sustainable improvement of city operations. Data collected by sensors in ICT networks from city residents, devices, and assets are then used to monitor and manage citywide resources and systems.

No clearly defined, universally accepted standards or business models currently exist for smart city projects. Various reasons can be given to explain why: the individual character of each project; because the market is still at an early stage of evolution; and how each city uses its smart city projects to solve a distinct, often localized, problem. As a result, securing funds to either initiate work on a project or to sustain the project over time remains an arduous mission, and creating sustainable business models is crucial to enable smart city projects to move beyond the trial stage to full-city rollouts.

Investment for a smart city is usually one of three types: private, with funds coming from a privately owned enterprise; public, with the government as the sole provider of funding; and public-private partnerships, in which both private companies and the government are the funding sources.

Public-private partnerships are the most frequent type of funding for smart city projects because they mitigate risks for both parties since each party has a financial stake in a project’s success. Moreover, partnerships usually provide the longevity essential to smart city projects, which typically are long-term jobs spanning several years.

In comparison, investments tend to be publicly sourced for smart city projects focused on Governance. This is because governments normally do not wish to give the impression that private enterprises have any direct influence over core government services, and private funding in the Governance sector could be suspect.

Similarly, smart city projects in Safety and Security also lean toward public investment. Because many of these projects focus on surveillance, unease could result over a private enterprise funding or monetizing surveillance, or if surveillance data were used for financial gain.

Conversely, smart city projects most likely to utilize private investment can be found in the Energy & Resource Efficiency area. This is expected because private enterprises operating utilities are motivated to self-fund the projects to reduce operational costs.

Among regions, Latin America was the likeliest to use private investment to fund smart city projects—the result of political and economic instability in the region, which makes investment from governments and the public sector unlikely. 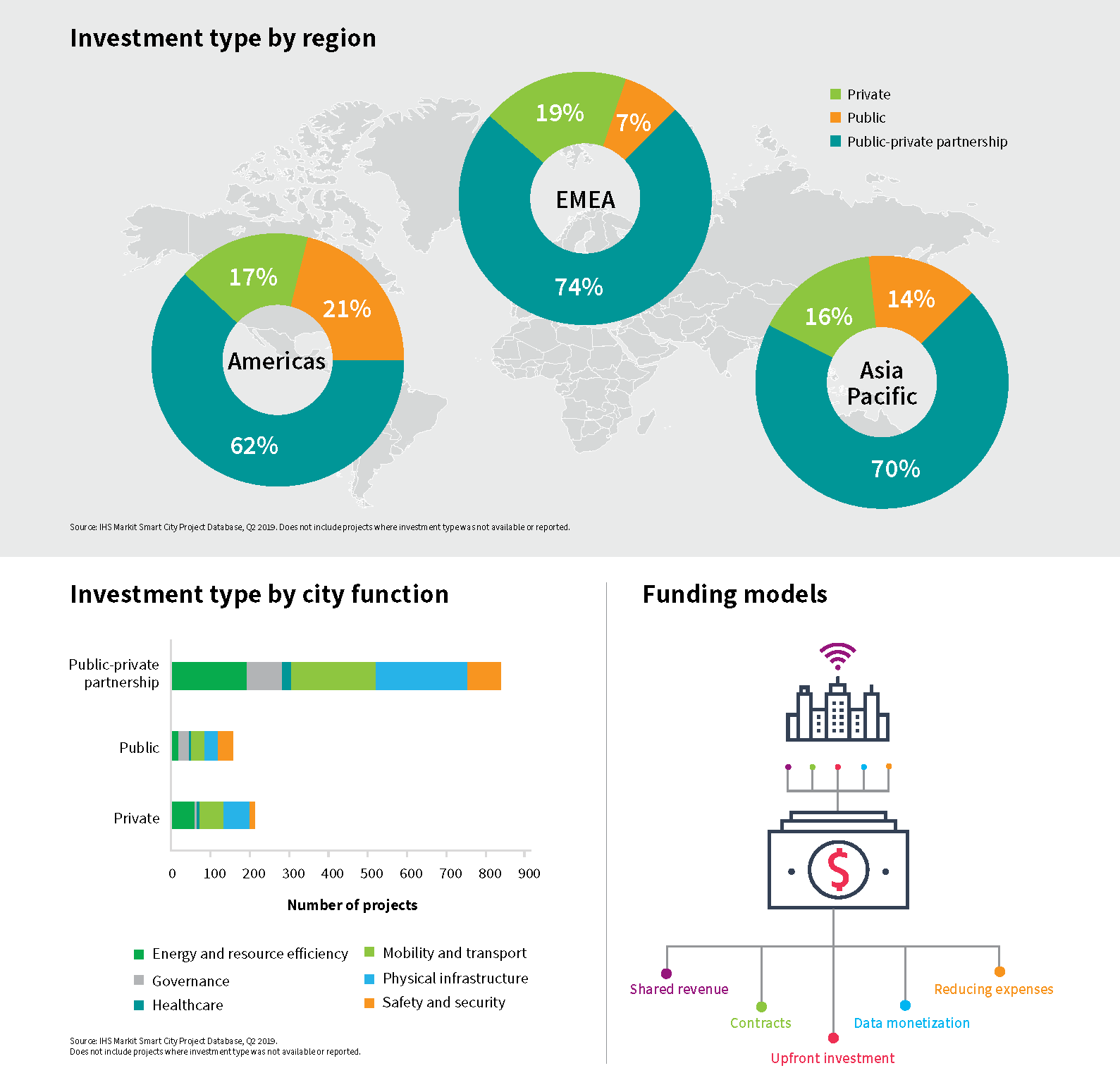 Several ways are available to sustain a smart city project while also reducing financial risk for the city and its partners backing the project.

One way is the shared revenue stream. In a smart city project that generates revenue, such as smart ticketing or smart parking, the entities implementing the project—usually the city together with a private firm—agree to split any revenue resulting from the project.
Contracts are another way for a city to pay for a smart city project. In this method, a company or a group of companies provides both hardware and software, and often the services as well, to support operation of the smart city project. The city, meanwhile, pays the company a monthly or yearly fee to use its devices and services. A growing trend for smart city project contracts is the inclusion of service-level agreements, which typically require the provider to meet a predefined measure of service—often defined in terms of response time. Failure to meet that metric could entitle customers to a reduced bill in their next billing cycle.

A gallery of players

Smart city projects involve many entities, each offering specialized skills or services.
Telecom operators offering communication services are an example. But even within the group, several kinds of telecom operators could be involved in a smart city project, ranging from the big national carriers to assorted smaller players, including competitive local exchange carriers (CLECs), internet service providers (ISPs), interexchange carriers (IXCs), and other mobile or independent wireless service providers.

The other types of companies that participate in smart city projects include network vendors, semiconductor companies, connectivity players, device makers, software firms, and start-ups. The principal player is, of course, the city, which is the main stakeholder and primary customer in any smart city project.

Included in each profile is a quantitative overview from IHS Markit of the projects that the company being tracked has recorded in the IHS Markit Smart City Project Database. Each profile in the report describes the company and its typical role in smart cities, analyzes a sample project, and includes the funding mechanisms that were used for each project.

For more information, see our report, Funding models for smart cities – 2019. The report is part of our Smart Cities IoT Intelligence Service, which provides a complete and thorough assessment of the various technologies, major players, and overall market dynamics underlying smart cities. The intelligence service also gives subscribers access to our proprietary database containing information on over 1,300 smart city projects in more than 300 cities.