As data-center switch vendors reduce their reliance of proprietary/custom silicon, merchant silicon use is expanding beyond white-box vendors to traditional vendor portfolios.

The axiom that software is eating the world may still be true, but it’s also true that hardware isn’t going out without a fight because of its capability to evolve over time and remain relevant.

As data-center switch vendors reduce their reliance of proprietary/custom silicon, merchant silicon use is expanding beyond white-box vendors to traditional vendor portfolios. In the Data Center Network Equipment Market Tracker - Q1 2019, we forecast merchant silicon shipped in data center Ethernet switches will reach 62 percent of all silicon units in 2023, up from 56 percent in 2018. During the same period, proprietary/custom silicon will drop to about 25 percent, down from 38 percent in 2018. Meanwhile, programmable silicon will rise to 13 percent, up from 6 percent in 2018. 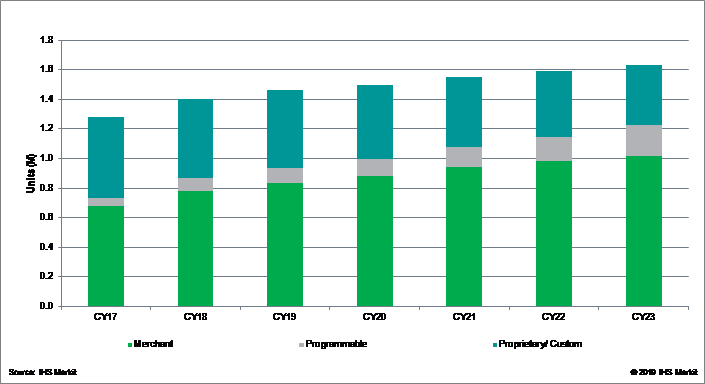 “It’s true that software is still eating the world, but hardware has been revived and has even found new life thanks to technology improvements in silicon and new open designs from organizations like the Open Compute Project Foundation,” said Devan Adams, principal analyst at IHS Markit.

Hardware giants like Intel and NVIDIA are recognizing the trends in the data center market and have acted quickly to capitalize on them by acquiring talent, intellectual property and technology from some of the innovative companies in the data center market. Given the deep pockets of these large businesses, their transactions may be characterized as low risk. However, if they continue to invest in their new toys and commit to expanding on the positive trajectory some of the companies were on before their acquisitions, these tech behemoths could come to pose a real threat to Broadcom’s stronghold in the data center switch market.

He has more than a decade of experience in network product management, marketing, telecommunications, and cloud market research. Prior to joining Omdia, he was a market analyst at Infonetics Research, where he played an instrumental role in developing Infonetics' first off-premises cloud intelligent service. During this time, he also developed and helped to manage intelligent service deliverables for data center networks, storage area networks, and software-defined networks.

Devan holds a Bachelor of Science in electrical engineering, with a minor in mathematics, and an MBA, with market research specialization, from the University of Cincinnati, US.