Avoiding calamity: How to stream video with supreme fidelity

Live streaming is no stranger to fiasco and debacle. The world over, there exists no fan of football, wrestling, or Game of Thrones who hasn’t encountered the exasperating wheel of doom: The video is buffering, and the action—maddeningly—grinds unceremoniously to a halt. Indeed, as an audience, we’ve resigned ourselves to the inexorability of service interruption, and on occasion, to transmission failure outright.

Live streaming is no stranger to fiasco and debacle. The world over, there exists no fan of football, wrestling, or Game of Thrones who hasn’t encountered the exasperating wheel of doom: The video is buffering, and the action—maddeningly—grinds unceremoniously to a halt. Indeed, as an audience, we’ve resigned ourselves to the inexorability of service interruption, and on occasion, to transmission failure outright.

Streaming doesn’t have to be this way. 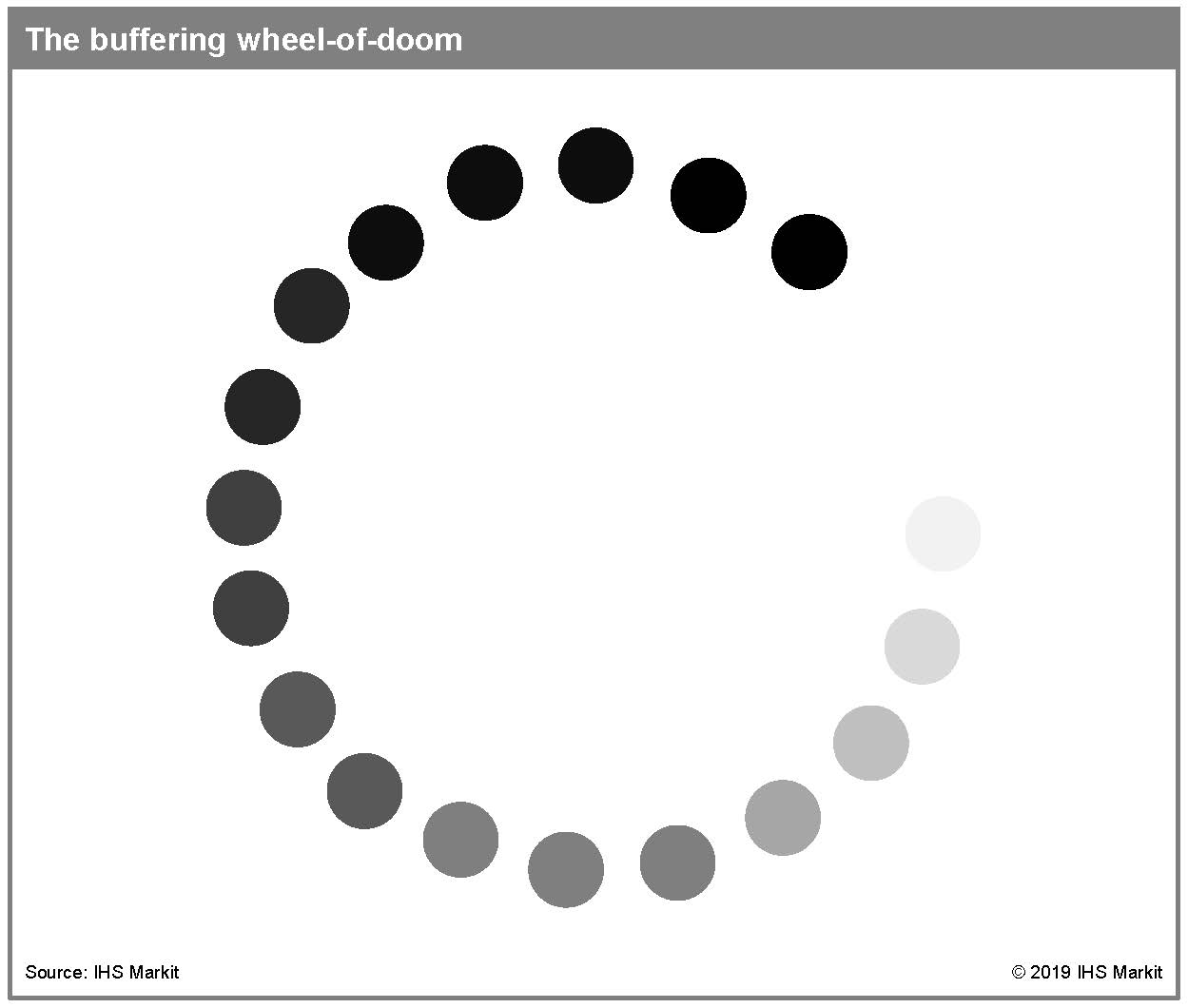 In this Market Insight—a post intended to build upon key themes that Verizon Media and IHS Markit examined during a recent IHS Markit-hosted webinar—we explore some of the unique, oft-unappreciated challenges of transmitting live, premium video over the open internet. While digital media companies grapple with challenges both endogenous and exogenous, internal and external, our focus will revolve around the endogenous obstacles that are fully within the ability of media firms to control, address, and ultimately surmount.

Video feeds don’t simply materialize in a broadcaster or operator’s headend. After the cameras capture the action, and during the contribution stage—when video has to travel from the venue to a media company’s video-processing—live transmissions are subjected to networks, equipment, bandwidth, and codecs that vary venue to venue and event to event. Before a video feed has been ingested—to say nothing of the feed’s being offloaded to a content delivery network, or CDN—contribution serves as a major source of latency.

The workflow portion of the distribution chain comprises encoding, stream personalization, and ad insertion. Workflow difficulties are intrinsically endogenous: The servers, processing power, and architecture that define the workflow phase fall directly under a media firm’s purview. Budget and economic constraints aside, there is no excuse for mismanaging the content workflow.

The delivery portion of the chain comprises delivery to a CDN and transmission across one or more CDNs and ISP-owned access networks. Delivery, by contrast, is largely exogenous: Unforeseen congestion, peering issues, CDN-to-CDN hand-off, and faulty network hops can introduce service degradation that broadcasters and operators are near-powerless to mitigate.

For their part, viewers tend to equate—however unfairly or implicitly—any service interruption with delivery failure. This apportioning of blame isn’t necessarily erroneous, but as an industry, our concomitant tendency to focus on delivery masks a multitude of workflow problems that can and demonstrably do rear their ugly heads.

The discussion below examines why encoding is so difficult, and how media companies should best address encoding’s unique difficulties. It is difficult to overstate just how essential encoding is to the live-streaming experience. The internet backbone and ISP-owned networks don’t comprise infinitely thick pipes. Spectrum and bandwidth are limited resources, and as such, encoding—the act of compressing video into a smaller, digital footprint—is the process that makes streaming video a non-rival good. Consumption and viewership by one does not preclude the ability of others to consume and view.

The nature of the problem

The impediment to successfully encoding and delivering a live stream hides in plain sight: live streaming isn’t remotely fault-tolerant. In a video-on-demand (VOD) context, service interruptions are an invitation to raid the fridge and procure a tasty morsel. In a live context, such as sport, service interruptions are an invitation to cancel one’s subscription and find a new provider.

In turn, the complexity of encoding a live stream on the fly has three principal determinants: resolution, frame rate, and bitrate. For any given codec, complexity and processing requirements are an increasing function of all three. An encoding system that cannot handle a desired resolution, frame rate, and bitrate will introduce buffering, producing pixelated, mottled video. Not nice.

At first blush, it may seem that purchasing heaps of encoders is the panacea to untangle complexity and simplify processing. The problem is that over-procuring compression resources is not efficient, scalable, or economically justifiable.

First, live audiences ebb and flow. Encoding resources that cannot track demand and then scale to match both viewership spikes and viewership valleys are inherently cost-inefficient.

Second, suppose that a media company decides to scale its encoding resources in lock-step with its launching new, online channels. In its early stages—channel load remains low—this strategy is likely to succeed. Over the near-to-medium term, however, a scale-as-you-go approach quickly becomes untenable. As channel launches proliferate, the fact is that a growing supply of compression resources isn’t sufficient on its own to ensure service reliability. Encoding processes break down unless the needs of encoding—or the number of video bytes that must be compressed—can be matched against encoding availability. Successful resource management requires not only lots of encoding resources, but also an architecture that can broker those resources.

Third and finally, encoding resources and processing power are rarely uniform. Unless intelligently managed, the process of spreading encoding loads across encoding machines of disparate capability can introduce additional and potentially severe latency.

Real-time spikes in audience size are arguably the defining characteristic of live events and live consumption. Accordingly, we believe that cloud encoding—and in particular, the ability to spin-up and spin-down compression resources in real-time—is an essential feature of any modern, live-streaming video technology platform. For all but the rarest of corner cases, inelastic, fixed-quantity, on-premise encoding builds are at odds with today’s streaming-heavy, live-heavy market. 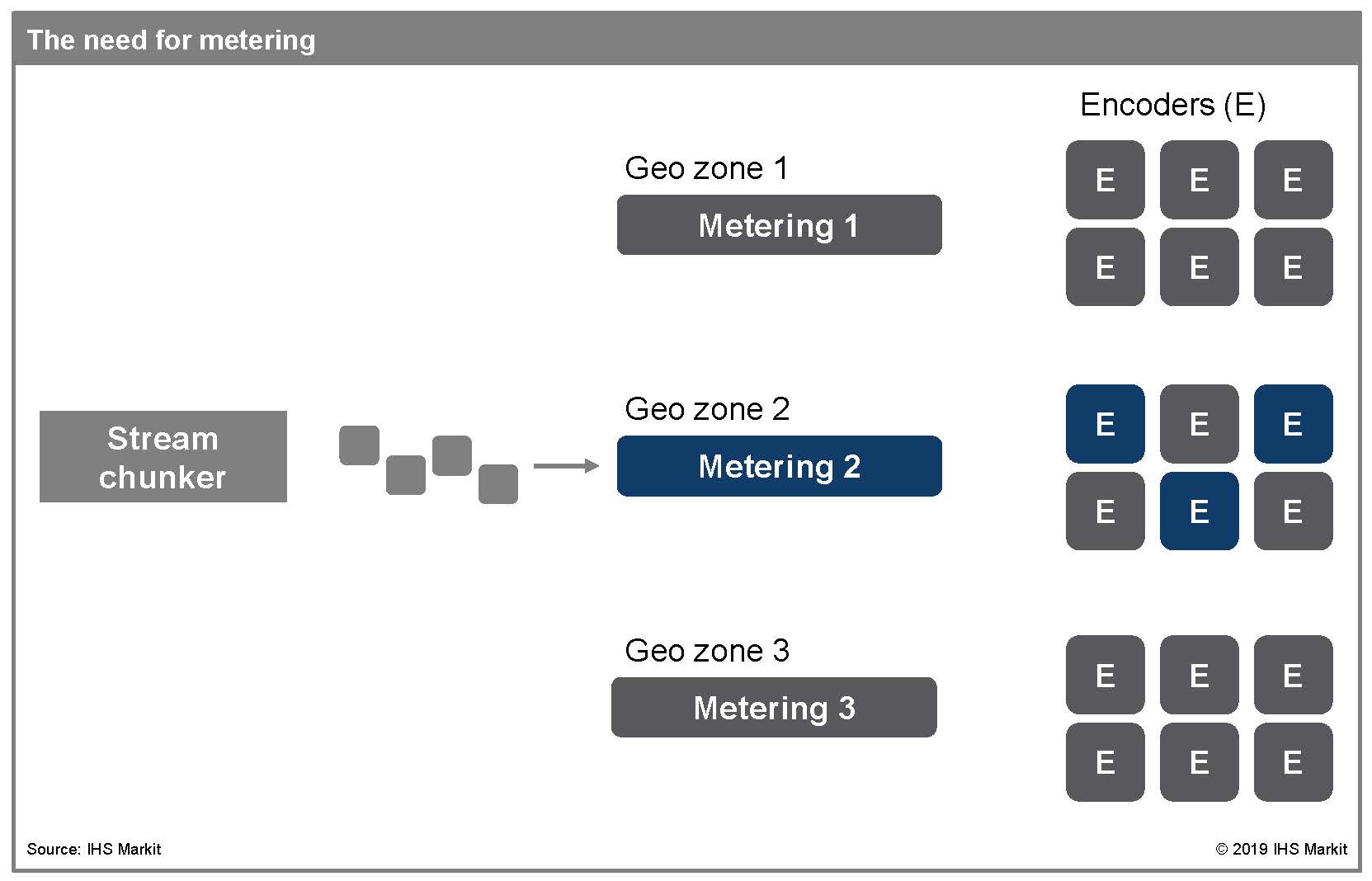 What of balancing encoding needs, and encoding demand, against encoding and machine availability? Assuming—for the sake of argument—that encoder-to-encoder capabilities are uniform, live-streaming platforms still require a mechanism for distributing encoding loads. Encoders can be, and do become, overburdened. Any system that naively moves video to the same encoder, time and again, will inevitably generate bottlenecks. We believe that cloud-based compression workflows require a metering, brokering, or trafficking system that dynamically allocates video to a multitude of different encoders, based upon real-time encoder availability.

In the real world, of course, encoding capabilities are manifestly not uniform. Suppose that a group of encoders—for any given file length, measured in seconds—takes twice as many seconds as the input file length to perform and complete the encode. Why is metering so essential?

In the figure below, a single encoder—if dumped with a 9-second file—will take a minimum of 18 seconds to complete. That is, relative to the live stream, the system generates 9 additional seconds of latency. By contrast, a system that chunks video into small segments, and allocates these chunks dynamically—even where chunks don’t begin the encode process simultaneously, at time 0—will perform more quickly, more predictably, and with less latency. In the same figure, the chunk-and-allocate system takes roughly 12 seconds to complete and generates a mere 3 seconds of latency.

We believe that metering, then, is essential in two respects. First, regardless of variance in compression capabilities and computational resources, metering systems refrain from overburdening any single machine and ensure that the encoding process as a whole doesn’t grind to a halt. Second, given that capabilities in reality do vary from machine to machine, metering systems—in conjunction with a mechanism for slicing video files into chunks—minimize latency.