The future of ultrasound is on a chip

The first launch of chip-based transducers was lackluster

Hitachi introduced the first chip-based ultrasound transducer, a capacitive micromachine ultrasound transducer (CMUT), in 2009 with the MATRIX linear transducer 4G CMUT. Despite initial interest, production did not expand as quickly as many expected due to image quality and production challenges. In the transition to a silicon chip, the transducer lost penetration capabilities. Although the transducer could scan the entire body, it was limited to scanning at a single depth, which was inferior to specialized piezoelectric transducers and insufficient for several medical procedures. Additionally, since the technology was new, manufacturing processes had not been developed to mass-produce the transducers. If these issues were resolved, end-users could have purchased a single, low-cost transducer instead of multiple transducers with different scanning frequencies. However, until recently, ultrasound manufacturers were hesitant to develop chip-based ultrasound equipment following the 4G CMUT’s difficult launch.

Chip-based transducers have returned and are here to stay

Although excitement from their initial product launch has waned, Butterfly Network likely put chip-based ultrasound development back on track with their launch of the Butterfly iQ in 2018. The Butterfly iQ is the first complete ultrasound-on-a-chip system. It is intended for whole-body use and sold at the low price of $1,999, compared to the global average selling price of $8,200 for handheld systems. While some industry experts think this product has ushered in a new ultrasound era, others are less enthusiastic. They cite the chip-based transducers’ lower image quality compared to premium ultrasound systems as the main reason why this technology will not revolutionize the ultrasound market. Time will tell which camp is correct, but the Butterfly iQ certainly primed the market for several ultrasound start-ups to launch innovative transducers. Kolo Medical launched the chip based SiliconWave transducer at the end of 2017, and in August 2019, Exo Imaging announced their plans for a piezoelectric micromachine ultrasound transducer (PMUT) after raising $35 million in funding. This transducer will pair with Exo Imaging’s advanced artificial intelligence platform. (Source: Exo Imaging).

Major medical imaging manufacturers launching chip-based ultrasound systems will have a dramatic impact on the medical imaging market. Their access to the healthcare industry and ability to produce enormous volumes of equipment could create a major change in the global ultrasound market. In the long-term, lack of image quality will prevent chip-based systems from replacing conventional ultrasound systems that utilize piezoelectric transducers in traditional settings. However, chip-based ultrasound manufacturers will likely target new, unconventional ultrasound markets, where their systems will be used for primary evaluations which do not require impeccable image quality. Historically, primarily hospitals and medical imaging clinics have purchased ultrasound equipment, but if ultrasound drastically drops in price it could become common in physicians' offices, health clinics, and point-of-care settings, and eventually evolve into a consumer product. 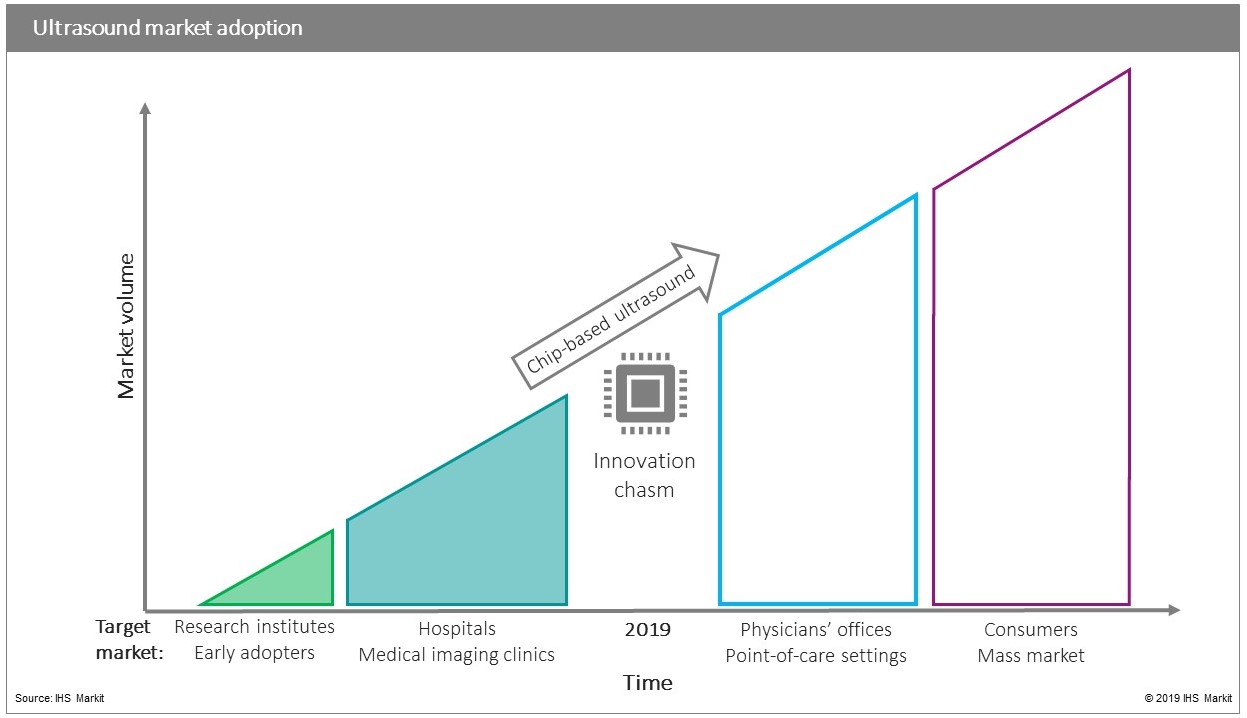