There was a broad reduction in games-related acquisitions and funding rounds in Q1, which was largely fuelled by declining activity in China. The mobile games segment remained strong and represented the majority of deals, underlining the state of the global games market as mobile-first.

There was a broad reduction in games-related acquisitions and funding rounds in Q1, which was largely fuelled by declining activity in China. The mobile games segment remained strong and represented the majority of deals, underlining the state of the global games market as mobile-first.

Significant deals in Q1 included THQ Nordic’s acquisition of World War Z developer Saber Interactive – with an initial payment of $150m and a maximum of a further $375m based on performance – and Stillfront Group’s $400m acquisition of American mobile games developer Storm8, the latest in a series of acquisitions made by the Swedish game studio coalition. Also, Disney sold both Marvel Strike Force developer FoxNext Games and Cold Iron Studios to leading mobile games developer-publisher Scopely. 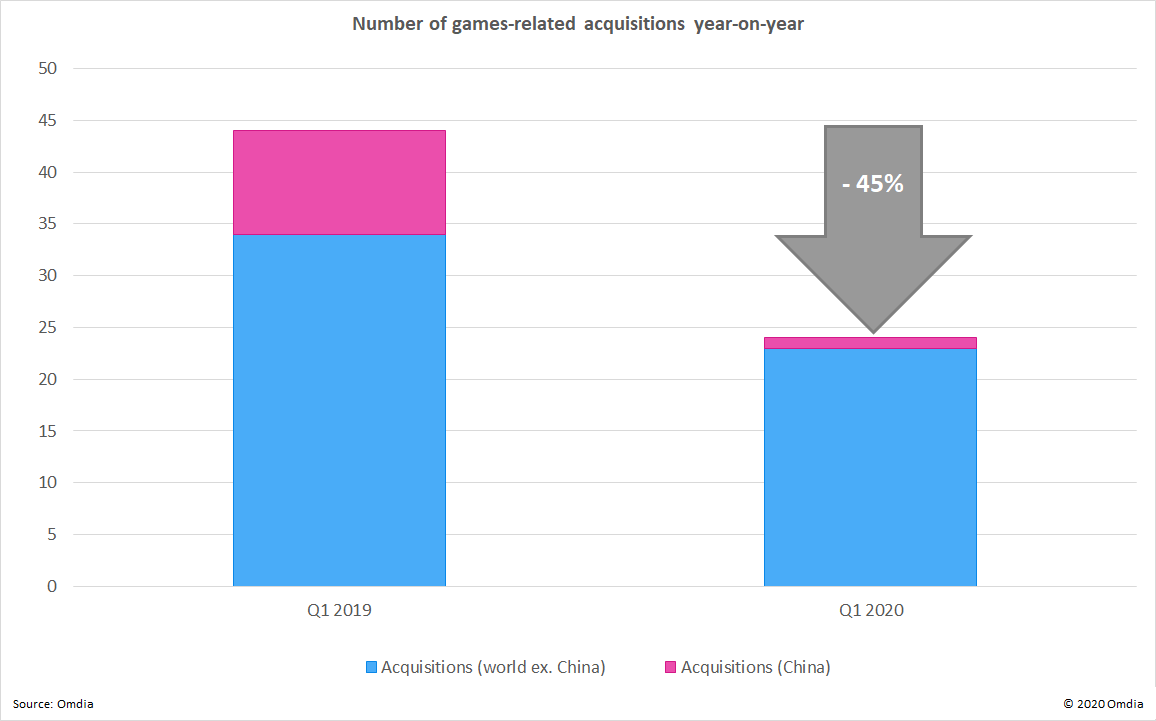 In 2019, Tencent engaged in only nine games-related deals, and this trend has continued into Q1 2020 – partially due to conditions surrounding the coronavirus pandemic. Tencent did however invest in Bayonetta and Nier: Automata developer Platinum Games in January, with the Japanese company maintaining independence. Platinum hopes to expand from development into self-publishing in order to fully own its popular IP, and Tencent’s financial input will support this venture.

Tencent has re-focused its acquisition and funding activity on industrial internet markets involving 5G, AI and cloud – areas highlighted for growth by the Chinese government. In March, Tencent became one of several high-profile investors to participate in a Series D round of financing for the Chinese real estate listing app Shell Zhaofang. The funding totalled more than $2.4 billion, and will be used primarily for technology research and development.

In 2017, Tencent launched its AI Accelerator Program: a start-up incubation project providing six months of technology support, marketing, management, investment and other guidance as part of its broader AI strategy. Several AI start-ups have recently been backed by Tencent as part of this program in Q1 2020, including intelligent robotics company Yingchuang Ailun, IoT solutions provider Uni-Ubi and fintech start-up Moguyun.

Compared with competitors Alibaba and Baidu, Tencent is falling behind in the cloud and AI markets, and so we can expect to see Tencent’s M&A activities in these sectors intensifying.

China’s ByteDance, known for video-sharing app TikTok, first got serious about games in early 2019 when it launched mini-games (hyper-casual style titles) via short video platform Douyin, the Chinese version of TikTok with upwards of 400m DAUs.  This mirrored Tencent’s strategy of funnelling users into mobile games via WeChat - a popular and established social app – and further monetizing the immense traffic.

ByteDance remains reluctant to acquire smaller development studios, and instead has sought to hire new staff to establish an internal games development team. This ambition was underlined by the company appointing an executive to lead its emerging games business in Q1. ByteDance will undoubtedly continue to leverage TikTok and Douyin as distribution channels to expand its share of the mobile games market, and the company acquired its first mobile game license from regulators in China – allowing it to earn revenue from the title which is loosely translated as “Fighting Girl Run”. The game is yet to be published on app stores.

In Q1, ByteDance provided $25.8m in Series B funding for the China-based media agency Mountain Top, which is known for managing popular Chinese celebrities and online influencers, such as AngelaBaby and Zhou Dongyu. ByteDance was the sole investor, and the two companies aim to form a strategic partnership, enhancing TikTok/Douyin’s dominant position in the app landscape.

ByteDance has global ambitions, however, that are not limited to China, as demonstrated by the January partnership with Epic Games. Users of TikTok were encouraged to take part in a Fortnite dance competition, wherein individuals would submit their own original dances for a chance to get them into the game as official Fortnite emotes. All participants had to record a performance of their dance and upload it to TikTok. This was a mutually beneficial partnership, with increased exposure and audience engagement for both parties.