Where is the video surveillance market headed in the post-coronavirus era?

Omdia published a Market Insight in February on how COVID-19 might affect the video surveillance industry well before the pandemic ravaging the world today had taken hold.

This update provides additional insight and perspective on the state of the video surveillance market since then. The impact on China from COVID-19—or coronavirus disease 2019—has been profound. Because of COVID-19, China's GDP contracted 6.8% during the first quarter of 2020, the country’s first quarterly economic retrenchment in decades, according to data released April 17 by the National Bureau of Statistics of China.

However, conditions in the country are improving as the second quarter gets underway. As a result of the stringent virus-control measures imposed by Beijing, the number of confirmed new cases of COVID-19 at present is down to the single digits. And with the lifting of home quarantine orders and an easing of the travel ban since the end of February across the country, business and manufacturing activity is beginning to show signs of recovery.

Still, the continuing spread of the pandemic outside of China is affecting the domestic video surveillance industry to some extent, owing to the country’s prominent place on the global trade and technology stage. China alone in 2019 accounted for approximately 90% of the worldwide production of video surveillance camera units, and its domestic surveillance market represented 47% of worldwide global market revenue, Omdia estimates, as shown by the chart below.

The global market for video surveillance equipment by region |Omdia 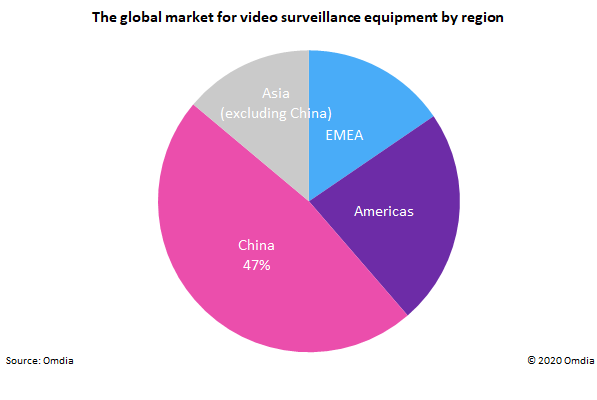 Location matters: in or out of China?
The question of location is of paramount importance. In China, where virus-containment efforts have taken hold, the production of video surveillance equipment has resumed, and the domestic supply of components is stable. Outside of China, however, where the pandemic continues, production activity has grounded to a halt, the market at a standstill.

Manpower was in short supply for industry and manufacturing in China during the first quarter as people remained in their homes.

At the beginning of March, however, leading video surveillance manufacturers announced plans to hire production-line workers. Among them are Hikvision, which said it would employ 5,000 workers; and Dahua Technology, which said it was seeking to hire 2,000. Meanwhile, Uniview arranged multiple shifts and ramped up hiring to ensure existing production targets were met. As people began returning to work in March, officials at various levels of government continued to coordinate efforts to prevent the virus from proliferating again in China. As a result, most of the country’s video surveillance vendors have resumed production to normalize operations.

Large suppliers, for their part, have taken steps to increase their inventory of US-made video surveillance materials, which could serve as a buffer while the US-China trade conflict drags on and with the US ban from last year on some Chinese goods still in effect. Hikvision, for instance, indicated its inventory at the end of 2019 had nearly doubled compared to the same period in 2018. The larger video equipment vendors are also moving to cut their reliance on American suppliers for materials and components, instead actively seeking Chinese replacements to ensure a continuous and stable supply of products.

Overall, the shortage of upstream raw materials typical in the early days of the outbreak  has been effectively alleviated, and the supply of video surveillance components is now stable in China. Most manufacturers are reporting price increases on some electronic components ranging from 10-30% in the first quarter, owing to rising costs in the domestic supply chain and in logistics and manpower. The rise in costs is being attributed, in turn, to the difficulties created by COVID-19, not to any trade tensions between China and the US. The increased costs will have some impact on pricing for video surveillance equipment on the lower end, but not as much on higher-end equipment. As the situation in China improves, manufacturers expect the cost of raw materials and equipment to fall back to 2019 levels during the second quarter.

Outside of China, the pandemic has severely affected the production of video surveillance equipment in areas where the equipment is being made, such as India, Vietnam, and Brazil, as factories remained shuttered under lockdown orders. It is difficult to say when production in these areas will resume since virus spread and containment efforts differ for each country.

Demand explodes for thermal cameras, with Chinese vendors also selling solutions overseas
Thermal cameras were widely used in fighting the coronavirus in China during the outbreak, and market demand for the product exploded in the first quarter.

In mid-to-late February, domestic production of thermal cameras rose, and additional cameras were sold as part of thermal body-temperature-measuring solutions. Initially, these were widely deployed in densely populated areas such as airports, railway stations, commercial complexes, and manufacturing plants, as staff returned to work. But since early April, as schools across the country reopened, the market has seen another wave of demand emerge for this solution; estimates put the number of educational institutions in China at approximately 518,000. Thus, if the government decides on a widescale deployment of the devices, demand for thermal cameras could exceed 500,000 units.

Abroad in Europe, the US, Southeast Asia, and other regions, a large demand has also surfaced for these solutions as a tool for pre-screening potential symptoms of the virus and to prevent its spread. After Turkey confirmed its first COVID-19 case, President Recep Tayyip Erdogan used thermal cameras to check the temperature of journalists and dignitaries around him during a meeting in Parliament. At Amazon, thermal cameras are being deployed to check the skin temperature of employees, after a spate of confirmed cases in more than 50 Amazon warehouses.

As in China, demand overseas for thermal cameras is expected to be strong as the pandemic continues and as end-users consider solutions to prepare for the possibility of a second wave of outbreaks.

Domestic demand in Q1 affected, government rolls out new stimulus plan
Several public video surveillance vendors in China have now released their Q1 financial reports that show their business being impacted at different levels. Revenue fell by 5% at Hikvision, by 19% at Dahua, by 36% at Kedacom, and rose just 0.5% at China Transinfo, the parent company of Uniview. The reversals are likely due to halted or delayed government-driven video surveillance projects as well as stagnant demand in the enterprise and small and medium business sector because of COVID-19.

In response to the economic slowdown caused by the outbreak, the Chinese government has been aggressively promoting a stimulus plan for the construction of so-called new infrastructure. By March 5, some 24 provinces and municipalities (out of a total of 31 divisions) had released investment plans for future key projects, with a total investment of 48.6 trillion Chinese Yuan (CNY), equivalent to approximately $6.9 trillion in 22,000 projects. This year alone will see investments being planned at nearly 8 trillion CNY ($1.1 trillion).

Domestic logistics improve; reduced overseas freight affects delivery
The early stages of the outbreak in China threw domestic logistics for equipment and supplies into chaos, exacerbated by various factors: a backlog in goods incurred even before the end of January at the time of the Chinese Lunar New Year or the Spring Festival; the ban on travel; and the closing of business and industry, resulting in the lack of available workers. The cost of doing business also rose during the period. Now with logistics and operations in China starting to show signs of recovery, prospects look more upbeat for the second quarter. Shipping costs, for one, are expected to return to normal in the second quarter.

The same cannot be said, however, for logistics on the international front, which have  been affected greatly and are causing delays in delivery for Chinese equipment manufacturers shipping overseas, wiping out any price advantages traditionally associated with Chinese makers because of increased logistics costs.

Because of COVID-19, the supply of Chinese-made equipment to markets abroad is now subject to various constraints, including delays associated with clearing customs and filing additional paperwork, higher freight and transport costs, and flight cancellations. With COVID-19 becoming a pandemic and with markets around the world shuttering in response, business prospects for China have worsened considerably. Over the short term, the pandemic will have an enormous impact on the video surveillance market, especially in markets abroad that rely on Chinese-manufactured equipment.

Headed where? The market in the post-coronavirus era
At a news conference April 17 on the economy's performance in the first quarter, the National Bureau of Statistics of China said economic indicators for the country improved significantly in March compared to January and February, with a prognosis that economic performance in the second quarter will be much better than in the first. Similarly, many expect domestic demand in the video surveillance market will recover in the second quarter. Vendors, in particular, are hoping that with the help of government stimulus funds, the Chinese video surveillance market might still be able to post some growth for the year.

On this question, Omdia remains cautious in its assessment, regarding the sentiment as one that might prove over-optimistic. From the perspective of one Chinese video surveillance vendor, the market abroad is not especially positive given the continuing havoc of COVID-19. The pandemic remains in varying stages of containment throughout the world, and government policies in dealing with the crisis differ accordingly.

And even if the pandemic lifts by the end of the second quarter, its effects will still be intense in the aftermath, severely affecting demand for the second half of the year. And while there may be pent-up demand following the prolonged period of restriction that the market just went through, the poor global economic situation and the looming prospect of a recession will likely hamper the immediate recovery toward growth of the video surveillance market outside China.

A detailed quantitative forecast on the global video surveillance market will be released in July as part of the Omdia Video Surveillance & Analytics Intelligence Service, available to Omdia subscribers. 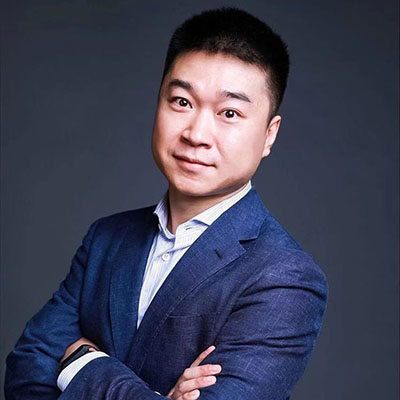 Tommy is a leading analyst responsible for the APAC video surveillance market. His research interests include cloud, storage, video IoT, big data, etc. Tommy travels regularly around regional markets such as China, Oceania, and Southeast Asia to research the markets and provide his latest insights to the security industry.

Tommy joined the company in March 2018 and is currently based in the Shanghai office. Prior to joining the company, Tommy worked with manufacturers and system integrators in the broadcasting and television industry and in ICT project implementation and management roles for several years. He holds an MBA from the University of Georgia in the US and a Bachelor of Engineering in automation engineering from the Communication University of China.