What LG Innotek’s Exit Means for the LED Industry

Sources indicate that LG Innotek is closing its LED division. The company has struggled to find a unique value proposition.

Sources indicate that LG Innotek is closing its LED division. The company has struggled to find a unique value proposition. Its exit is a help to other suppliers, but LG is not large enough for this to be a large effect. Seoul Semiconductor, Samsung and Nichia are among the suppliers that may benefit.

Reports of LG Innotek’s exit from the LED industry have been in the media since the turn of the year. Initially just strong rumours; these seem to have been all but confirmed more recently. Contacts at LG Innotek have not responded definitively to a request from Informa to clarify the situation, and sources at other companies in South Korea have suggested to Informa that the LED division is currently in the process of being closed.

Today’s fiscal report is the closest LG has come to a confirmation that this must be partly or fully true. LED revenue is no longer shown separately in the report. The Q4 report in January referred to “ongoing restructuring” but still suggested the company would “expand UV and auto. LED sales.” Today’s Q1 report simply moves LED into “other” without providing any updated commentary.

LG Innotek’s visible Packaged LED revenue (excluding modules and ultraviolet LEDs) is estimated at about $20 million in Q1 (but this figure may be revised by further research ahead of the publication of our next quarterly report). This compares to $67 million in Q4, and over $90 million in previous quarters.

To understand why LG Innotek’s business was ultimately not successful, it is worth examining how it began. Back in 2008 and early 2009, LG Innotek was a very small, little known LED player just joining the market while others were much more established.

In Q4’2009 and 2010 LG Innotek made a huge bet in LEDs, massively increasing its production, installing over 100 MOCVD from Veeco and Aixtron; investing hundreds of millions of dollars. At the time, there were good arguments for this. In 2010, the LED industry was undergoing a spectacular boom, with Packaged LED revenue growing 58% vs 2009.

The LED market’s spectacular 2010 growth was partly due to economy recovery from the weak 2009, however there was also growth in LED penetration in lighting, notebooks and other areas. But the real star was the TV market as about 20% of TVs used LED backlighting in 2010, compared to about 4% in 2009, adding about $2 billion to the LED market in that one area alone. Huge further growth was expected in 2011. Only with the benefit of hindsight is it clear that LG Innotek made a mistake in buying too many MOCVD in 2010.

New designs hit the TV market in 2011 (and 2012) that used less LEDs per TV or backlighting, the LED pricing crashed (losing about half of its value) as everyone tried to get into the market, and penetration rates for LEDs in TV didn’t grow as rapidly in 2011 as expected. Notebooks which had grown rapidly since 2008 reached 100% penetration in 2011, and the whole backlighting market was no longer a revenue growth area.

LG Innotek has been struggling to find a unique selling point for its business model ever since. In backlighting, it remained a strong player, but faced tough competition from Nichia, Seoul Semiconductor, Samsung and others. In lighting, the entrance of many Chinese players subsidized by their government, at prices no-one else can match, meant that LG Innotek could not be the lowest cost supplier. But neither was it the most innovative, nor with the strongest IP or technology (at least not compared to suppliers like Osram, Cree, Nichia and Lumileds). 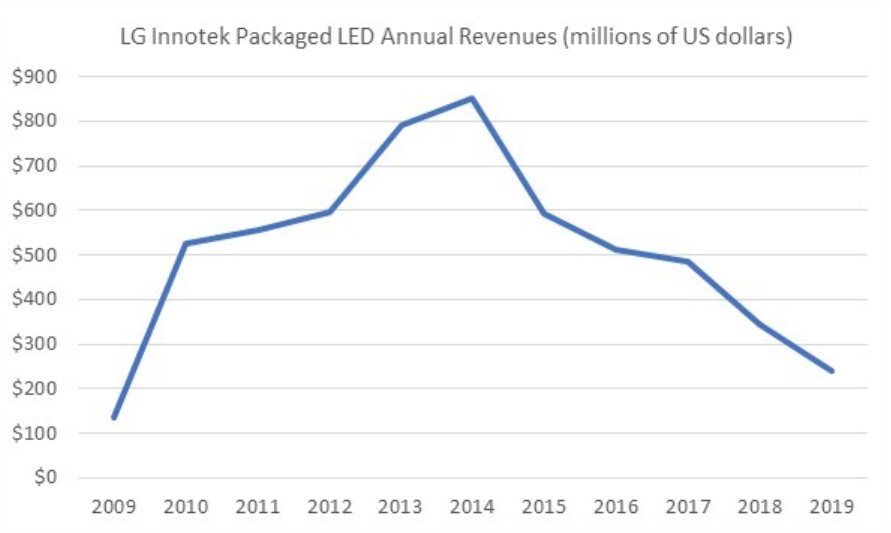 Eventually, in more recent years, LG Innotek turned to automotive and ultraviolet LEDs, where it had some growth. In UV-C, LG Innotek was the leader and probably the only supplier with double digit revenue in 2018 and 2019 (i.e. over US$10 million per year). However the revenue growth did not reach even close to the level of the earlier backlighting business, and overall it was difficult for the LED division to make a profit.

In more simple terms, LG Innotek’s exit is a consequence of a market that has often had periods of over capacity due to too many suppliers in the market since 2011. In the last decade, Toshiba, Sharp and Toyoda Gosei have exited at various points while no new large players entered the market after 2011 (some second-tier players have entered in mainland China only).

LG Innotek’s exit will be a boost to other suppliers, but not a substantial one. It has fallen out of the top 10 Packaged LED rankings in recent years, while its wafer and die capacity share is only about 1.5%, some of which may yet be sold to other players if any buyer has been found for 2010 MOCVDs at reduced prices.

Some suppliers will see a clear benefit from this. They will likely include Seoul Semiconductor and Samsung, the other South Korean suppliers that can benefit by capturing domestic business. Both Seoul Semiconductor and Samsung also have a strong backlighting business and compete for LG Innotek’s customers. Nichia is also well placed to capture wins in this area, while other backlighting suppliers include AOT and Jufei.

If LG is also exiting its UV business, then suppliers of UV-C, such as Seoul Semiconductor and its sister company Seoul Viosys, may be able to benefit. UV-C is seeing much greater attention this year due to its use as a disinfectant. This may be a good time for suppliers to evaluate whether or not to expand their business in this area.

Some companies, such as Cree and Lumileds, that mostly target very different areas (such as high-power lighting, automotive etc) may not be able to gain anything at all from LG Innotek’s exit.