While Amazon appears well-positioned to launch its cloud gaming platform, Project Tempo, it may benefit from a delay, allowing the company to establish audiences for first-party content and set the stage for future gaming content.

Amazon is well-positioned to launch a cloud gaming service. The company was the first to really invest in the cloud computing industry, and has played a crucial role in its shaping. As a result, Amazon Web Services (AWS) is the industry leader by a large margin. Despite having many of the necessary ingredients for a strong launch, numerous hurdles faced by current cloud gaming services such as Google Stadia – which does not have the benefit of a core games business like Microsoft’s xCloud - will still have to be carefully navigated. Stadia suffered based on its small initial player-base, a missing array of promised features and a confusing, consumer-unfriendly business model. Amazon has the benefit of being able to assess and reflect on the consumer response to existing services and take measures to ensure it does not replicate their mistakes.

Amazon’s cloud infrastructure is the most established, and the company itself has a great wealth of experience in the area. As with Google, however, Amazon has a chequered track record in terms of launching successful consumer products. The Amazon Kindle is the most successful line of e-readers ever made, leading the market, and Amazon’s affordable but capable Fire tablets have proven popular with consumers. At the same time, CEO Jeff Bezos has admitted that the company has made billions of dollars’ worth of failures; including the Fire Phone and Amazon Destinations. Whilst AWS is clearly a huge advantage, this is only one dimension of the final offering, and the emerging features, content, business and monetisation models will truly shape the Project Tempo service.

First-party content could set the scene for future Amazon exclusives

Amazon has been creating social and mobile titles since 2010, with the Amazon App Store launching in 2011 and Amazon Game Studios – a developer subsidiary of Amazon – first established in 2012. Other than a cancelled team-based brawler called Breakaway in 2018, and the recently-released Grand Tour Game in 2019, the company has yet to produce compelling content across the PC and console platforms. Whilst Google has now established its own first-party studios, no content was ready in time for Stadia’s launch.

Unlike Google, Amazon will launch its cloud gaming service with first-party content. Its new sci-fi shooter/MOBA “Crucible” will be released in May, and there are two confirmed MMOs in the pipeline: one based on Lord of the Rings, and another by the name of “New World”. In this way, the service being delayed until 2021 could prove advantageous; these titles will have had time to establish audiences, and their popularity could strongly influence the initial interest in Project Tempo. If these titles are well-received, they could lay the groundwork for Amazon-exclusive games on the cloud service in the future – content which could drive users to the platform.

A lesson from Stadia: multiplayer experiences demand cross-platform play, but is it feasible?

Amazon’s three first-party titles are all multiplayer, and so cross-platform play will be critical in order to avoid the issues faced by Stadia when choosing Destiny 2 as its primary bundled content offering. Due to a lack of players on Google’s cloud platform, matchmaking queues have been a significant point of frustration for consumers, leading many to head back to alternative platforms for online multiplayer experiences.

However, one issue with cross-platform play for competitive titles is that cloud players will always be at an inherent disadvantage due to lag and limited FPS versus PC-players. In Destiny 2 and Amazon’s upcoming MOBA Crucible - which is likely to try and establish an esports presence - this could prove detrimental. However, for Amazon’s MMOs which have less emphasis on fast reactions, cross-platform play could well do the job of maintaining populated realms and sustaining player engagement.

What’s more, cross-platform play would also open the cloud player-base up to an influx of cheaters – something which the Stadia platform is currently able to circumvent due to its closed eco-system; a strong selling point for consumers who are growing increasingly weary of cheating.

Amazon will undoubtedly leverage Twitch for its cloud gaming service, as the streaming platform represents access to a substantial existing games audience. Google has integrated Stadia into YouTube, and a similar approach will surely be taken by Amazon. Although YouTube has been focusing on expanding its live-streaming offering in recent years – and even echoing Twitch features such as the ability to “Cheer” with “bits” - Twitch remains the undisputed king in this regard, with 1.2m average concurrent viewers in 2019. As such, the prospect of jumping in to a multiplayer game via Twitch, with a minimal load time, is a more substantial proposition.

Amazon also announced it is also developing a suite of casual games that broadcasters on Twitch can play alongside viewers in real-time. This will generate mass, engaged audiences that will be ideal for another of Amazon’s growing areas of interest: advertising. This is certainly a potential monetisation option in the future for consumers who are not willing or unable to pay for access to the service.

Given the company’s existing though limited expertise in social and mobile games apps, these interactive Twitch experiences could prove popular – especially as viewers often thrive on brief moments of interaction with their favourite influencers.

Amazon will surely incorporate its cloud gaming service into its Fire TV media streaming devices, just as Google has provided Stadia access via Chromecast Ultra. Although Omdia data shows that the Chromecast installed base is currently double that of the Amazon Fire TV Stick globally, Stadia is only accessible via the Chromecast Ultra, which has a vastly reduced reach. Google chose to limit the range of devices Stadia was available on to those capable of HDR and 4K in order to emphasise quality, and Amazon may elect to impose similar limitations. Importantly, Amazon’s Fire TV offerings prove far more popular in North America – a powerhouse in the media and entertainment industry.

Amazon also offers the new Fire TV Cube and Fire TV smart TVs, which will further expand the addressable market for TV-based cloud gaming. These devices – especially the smart TVs - are set to see healthy growth over the next few years. Smart TVs will continue to erode the need for media streamers, so the growth of the Fire TV smart TVs will represent an important factor in future accessibility and uptake.

Google is planning to expand Stadia support to further Android smartphones and Android TV in 2020. Given the fervour surrounding its launch has dissipated, this gradual integration of Stadia into existing Android platforms may fall slightly below the radar and fail to have a notable impact. Amazon will need to make its cloud gaming service available across as many platforms and devices as possible at launch if it is to maximise initial penetration and capitalise on the hype of the release. 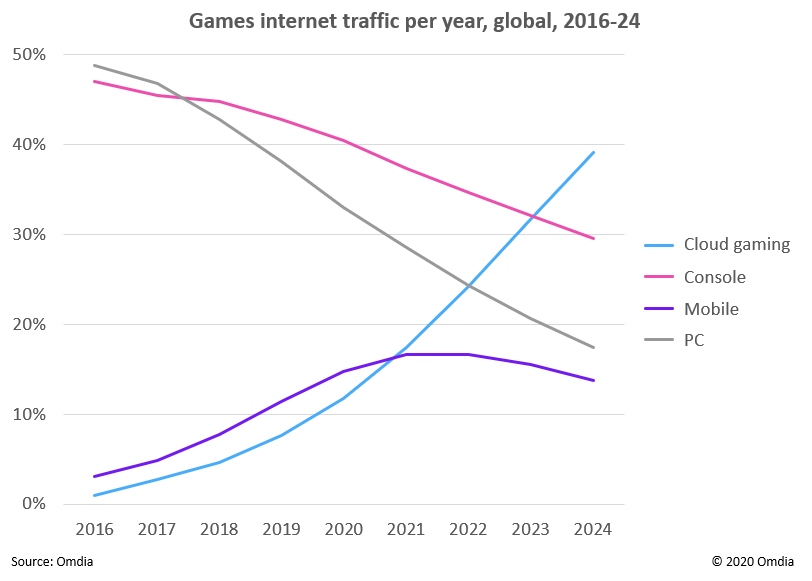 Due to increased demand for streaming services, both Netflix and YouTube have taken steps to limit streaming quality. Valve are also delaying Steam auto-updates to preserve bandwidth, and encouraging users to “self-throttle” their own connections. There is a considerable strain on internet infrastructure, and a reliance on cloud gaming services at this stage could have proven catastrophic, with enforced slowdowns likely rendering many games unplayable. The advent of 5G may provide more stability in many cases, but consumer demand is also growing – Omdia forecasts show that global gaming-related network traffic in 2024 will be five times the size it was in 2019.  Ultimately, this is a reminder that fast broadband infrastructure is the very foundation of a successful cloud gaming experience, and not something that should be taken for granted.