An acute shortage of ventilators due to COVID-19 prompted desperate searches for them, with many leading ventilator suppliers planning to expand capacity, as non-healthcare suppliers looked to support the provision of components.

As the daily toll of those sickened from the coronavirus continues to rise across the globe, an acute shortage of ventilators is prompting a desperate search for the critically needed machines, prompting government-led initiatives as well as private-sector partnerships to come up with new ventilator solutions.

But while ventilators will be in extremely tight supply for the short term, forecasts show the ventilator market can expect an almost doubling of shipments this year compared to 2019, new research from Omdia shows in the wake of the pandemic from the coronavirus disease, also known as COVID-19.

What is unclear, however, is whether the bump in shipments, expected to spread out through the course of the year, will be enough to treat those projected to succumb to the deadly virus. Even so, ventilator shipments are forecast for growth despite initial fears, as manufacturing capacities to make ventilators will be engaged to their fullest from now until the end of the year. Many leading ventilator suppliers have plans to expand capacity, and non-healthcare suppliers are looking to support the provision of components. 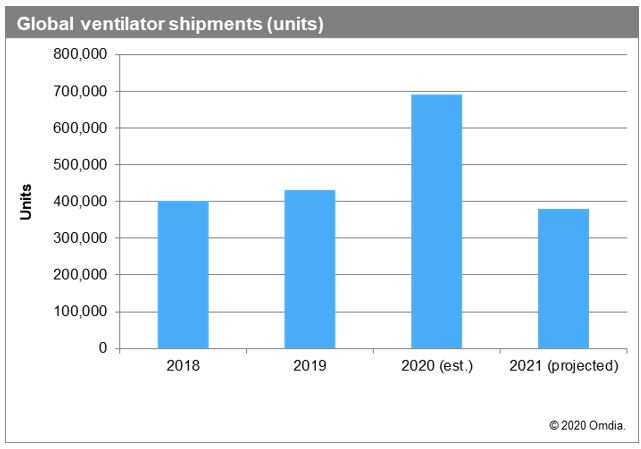 In 2020, a significant increase of 104% in ventilator shipments is projected in the critical care-high acuity segment, where high-end devices with advanced functionality are deployed exclusively in critical-care settings. Growth, at 87%, is also high in the critical care-mid acuity segment, where the ventilators being used are also for critical-care situations but do not possess the same level of advanced features found in the high-acuity segment. In the sub-acute segment, where ventilators are designed for use outside the intensive care unit (ICU) of hospitals or healthcare facilities, shipments will increase by 136%.

In the remaining ventilator segments, growth will range from 99% in the emergency and transport segment, to 40% for home care, where the machines are used for those on both life support and long-term non-life support. The ventilator segment with the year’s slowest growth of 13% will be in the neonatal segment for newborn infants, where COVID-19 has had less effect and, subsequently, requires less demand for ventilation support.

Extreme shortfall
Despite the rise in both shipments and revenue projected for the ventilator market this year, ventilators are currently in severe undersupply. Manufacturers say they are unable to produce more ventilators because of an acute shortage in components, brought about by the closing of production lines in locations all over the world, where the components are made.

Ventilators help with breathing for those unable to breathe on their own. But the machines are complex, using specialized parts and sophisticated software.

Omdia sources say there are ongoing industry discussions to move the manufacturing of non-ventilator-related lines to produce items such as casings, electronic components, or even turbines for use in ventilators. Many non-ventilator manufacturers have also been asked to develop specific ventilator products from scratch, despite initial thought on the difficulty of producing some elements, such as the circuit board or the ventilator software.

Increased demand is also foreseen for solutions to help patients that have been hospitalized and need respiratory assistance but do not yet require a ventilator. Examples of these solutions include oxygen therapy, high-flow nasal therapy, and CPAP—continuous positive airway pressure—machines.

The players
The core players in the ventilator market include Getinge from Sweden; German-based Drager; Switzerland’s Hamilton; Philips Healthcare from the Netherlands; and US makers GE Healthcare in Illinois, and both ResMed and Vyaire Medical from California.

In the UK, the government is pursuing multiple strategies to source 30,000 ventilators for the country’s National Health Service to treat COVID-19 patients. At least 12 firms have come together forming a consortium to scale up the production of already proven ventilator models made by two UK specialist firms, Smiths and Penlon. The Ventilator Challenge UK consortium includes, among others, Airbus, Rolls-Royce, Ford, McLaren, and Siemens, working on a lightweight portable ventilator from Smiths; and on a more heavy-duty machine suitable for hospital use, from Penlon. UK defense firm Babcock has also joined engineering company Dyson, the maker of household appliances such as vacuum cleaners, to produce a new medical ventilator based on specifications set by the UK government. Separately, Dyson also reported it had developed a new ventilator called the CoVent.

In other initiatives, engineers at University College London worked with the institution’s hospital clinicians and with Mercedes Formula One to build in less than a week, a breathing aid that could help keep COVID-19 patients out of ICUs. The device delivers oxygen to the lungs, forgoing the need for a ventilator, and is already approved by UK regulatory agency MHRA.

In the US, President Trump urged the states to look for solutions and fend for themselves. And in the absence of an official directive from the White House on how industry might help ease the lack of ventilators and other equipment to protect the vulnerable, American companies have stepped in to fill the gap and are partnering to find solutions.

Automakers Ford and General Motors (GM), for instance, are teaming up with ventilator manufacturers to build ventilators. Ford and GM both have a history of assisting the US during national times of crises. Ford is likewise in partnership with GE Healthcare and 3M to manufacture approximately 1,000 respirators a month, utilizing fans from F-150 trucks, the most popular in the country, and parts made on 3D printers. Those parts, however, must be combined with electronics that are made by other parties.

European carmakers have also been approached by their own governments to help produce more ventilators. Germany called on Volkswagen AG, which had shut down its factories, asking them to shift production to ventilators and masks. In Italy, which has the highest number of COVID-19 deaths in Europe, Ferrari NV and Fiat Chrysler Automobiles NV are in talks with the country’s biggest ventilator manufacturer to help boost output of the breathing devices. Meanwhile, Dublin-based manufacturer Medtronic Plc is in talks with Elon Musk, CEO of US electric vehicle and clean energy firm Tesla Inc., to make ventilators. In the US, Musk had taken steps to procure more than 1,200 ventilators from China for distribution to American hospitals for free.

Knock-on impact on 2021
With demand for ventilators projected to rise significantly throughout the year, what is expected in 2021?

For 2021, Omdia projects a significant decline in ventilator demand, with initial projections of a global decline in unit shipments of 45% in 2021 compared to 2020. It is likely that the market will become even more price competitive, with a surplus of vendors active and competing for share.

Other issues to consider
From the time the first cases of COVID-19 were reported in Wuhan, China, at the beginning of January, the virus has spread with alarming ferocity. In its most recent update, on March 31 at 18:00 Central European Time, the World Health Organization reports a total of 754,948 confirmed COVID-19 cases; 36,571 deaths; and the presence of the coronavirus in 202 countries. Bracing for the worst, government and health authorities worldwide also say they do not know how long the pandemic might last.

Besides the need for more ventilators are various auxiliary issues to be considered in the ongoing fight to contain the virus. These issues include—but are not limited to—the following:

Omdia will continue to closely monitor developments surrounding COVID-19 and provide timely updates as needed for information and guidance. We urge everyone to take all available precautionary measures at every turn to stay safe and remain healthy. 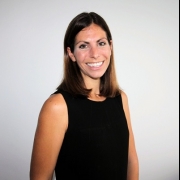 Kelly Patrick leads the Healthcare Technology team, which is part of the technology practice at Omdia. In addition to managing the strategic direction of the team, she is focused on developing market studies in the imaging, clinical care device, healthcare IT, and digital health market segments. Kelly has more than 11 years of research experience within the healthcare technology industry. Her main areas of expertise are infusion pumps, patient monitors, ventilators, sleep therapy, oxygen therapy, and nebulizers. She works on both syndicated and custom research, producing high-quality market data, forecasts, and competitive intelligence. Prior to joining the company, she worked as a study scientist involved in the development of new immunoassay techniques and sample analysis. Kelly holds a Bachelor of Science (Hons) in pharmacology from the University of Leeds and is based in Wellingborough, UK.