With an on-going pandemic and uncertainty in global economies as the backdrop, Huawei today launched their flagship P40 series, an all-5G lineup of three imaging-focused models that is straight out of Samsung’s Galaxy S20 playbook. The P-series has been a category leader for Huawei since the days of the P7 in 2014. Initially marketed as the fashion-oriented smartphone, Huawei has since evolved the P series franchise into a mobile photography powerhouse.

With an on-going pandemic and uncertainty in global economies as the backdrop, Huawei today launched their flagship P40 series, an all-5G lineup of three imaging-focused models that is straight out of Samsung’s Galaxy S20 playbook.  The P-series has been a category leader for Huawei since the days of the P7 in 2014. Initially marketed as the fashion-oriented smartphone, Huawei has since evolved the P series franchise into a mobile photography powerhouse. 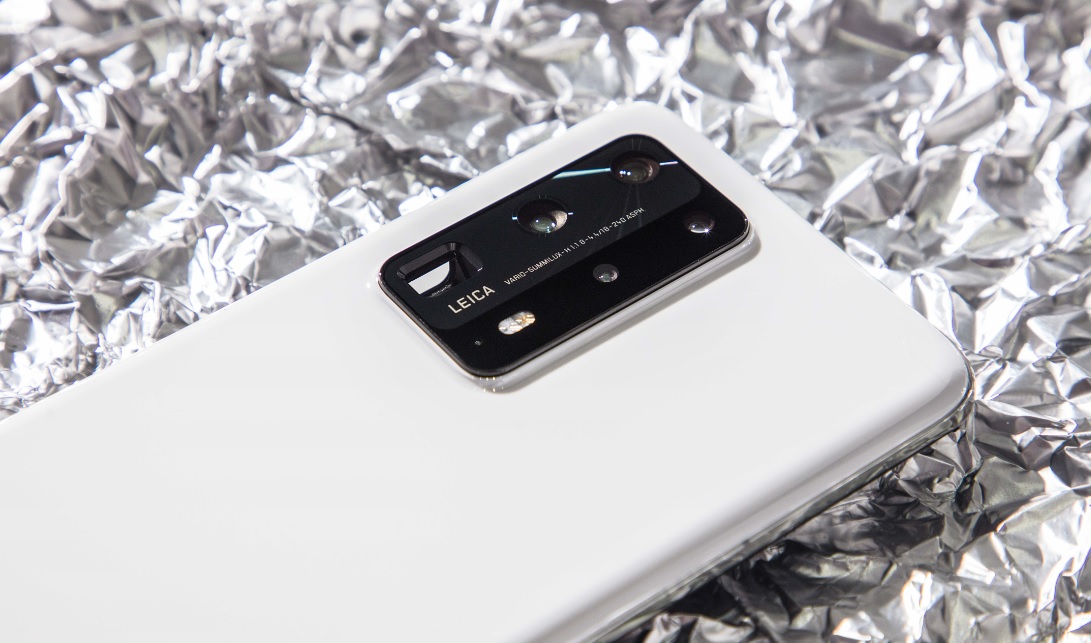 The Huawei P40 is endowed with a sizable camera bump which houses multiple cameras of different resolutions, apertures and focal lengths.   In fact, the P40 Pro + is heralded as a penta camera smartphone however, one could argue that the fifth Time of Flight (ToF) camera does not count.  The effective four camera system is engineered to improve upon the capabilities of last year’s P30 design.  This trend in smartphone design around the camera module can been seen in the recent Samsung Galaxy S20 Ultra and even the iPhone 11 Pro.

The industry trend towards thicker industrial design is not intentional but necessary to accommodate the advanced optics being used.  Last year’s Huawei P30 Pro set the bar high for Samsung and Apple to follow.  Both OEMs responded with their own advanced mobile photography technologies.  In this arms-race for mobile photography dominance, Huawei’s P40 Pro + is latest design to aim for an even higher target of camera performance moving into 2020.

One of the advanced photographic technologies carried over from the P30 is the use of a large (1/1.28 inch) 51MP sensor.  Larger image sensors allow for larger individual pixel sizes [depending on the megapixel count].  The key benefit to having larger sensors is that the sensor pixels can capture more light (see graphic below).  This is especially useful in dark situations where flash photography is not available.  The P40 Pro + contains one of the largest mobile image sensors in the market.  Last year’s P30 had a smaller at 1/1.7-inch sensor in the same RYYB pixel layout.  Large sensor technology was first introduced by Nokia in 2012 on the Pureview 808.  Since then device makers had prioritized industrial design and aesthetics over that of photographic needs forcing further miniaturization of camera modules and as a result, decreased image sensor size.  Simply put, larger image sensors are more sensitive to light and capture better pictures than smaller ones.

As a reference, the following chart below illustrates to scale the differences in sensor size. 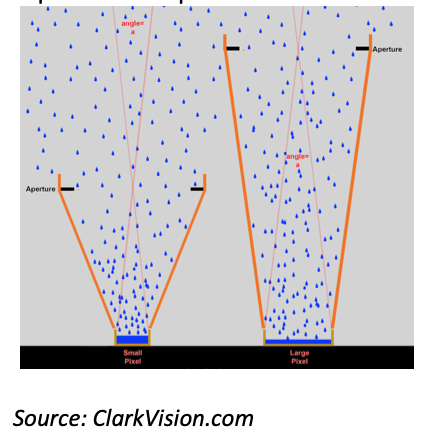 Another mobile photography technology advancement is in telephoto optics.  The Huawei P40 Pro + uses a pair of telephoto lenses to capture distant images with improved image quality.  The 10x “superzoom periscope” lens works in concert with the 3x fixed optical telephoto lens to improve image noise and autofocus which has dogged telephoto lenses to date.  The current limitations of zoom lenses come from the fact that longer focal lengths require longer lens assemblies.  In order to achieve high zoom multiples (50x-100x), a periscopic telephoto lens is used to bend the incoming light 90-degrees in order to project that light into a longer axis of the phone assembly but this elongation of the optical column naturally forces the aperture to shrink. 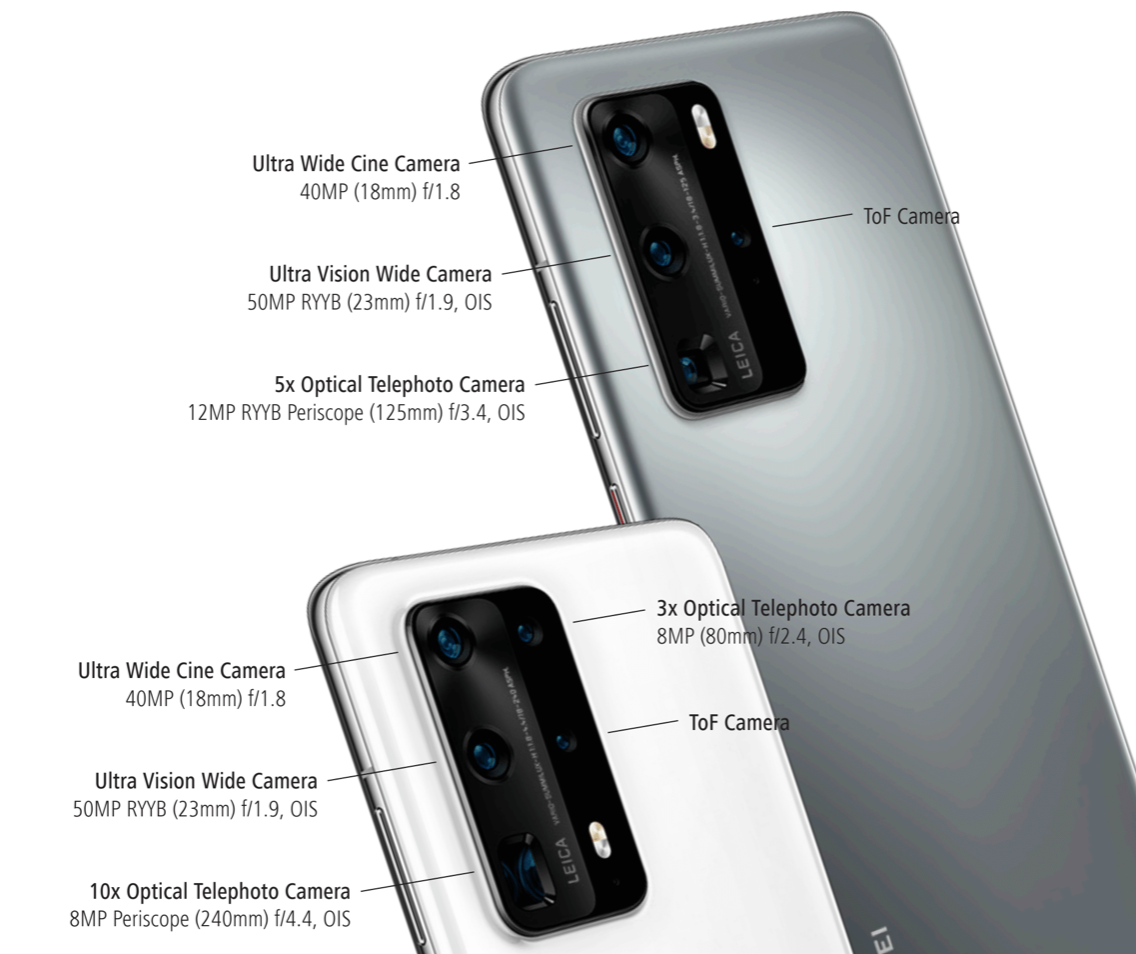 What Huawei has done with the P40 Pro + is to pair the image data from both the 3x fixed and 10x telephoto to create a clearer zoomed image.  Since both have the same focal length, the pairing of image data is more uniform.  Existing telephoto design leverages the main camera in order to improve resolution albeit with mis-matched focal lengths.  Due to the variable zoom of the 10x periscopic lens, the 10x lens aperture is limited to f/4.4 compared to the f/2.5 of the fixed 3x lens.  Even with the help of optical image stabilization (OIS), the smaller aperture in the 10x periscopic lens decreases the amount of light getting to its 8MP sensor.  What Huawei has done here is to leverage the 3x fixed optical zoom with the larger aperture to assist in telephoto imaging.

There are downstream benefits of having a second telephoto lens with a larger aperture. One improvement is faster telephoto focus. This is especially useful while using in conjunction with the OIS to stabilized the hand jitters at high zoom especially while taking videos.  Huawei refers to this improvement as the “super steady telephoto video”.

With the P40 series, Huawei continues the P series franchise with better marketable photography wizardry.  However, Huawei is still under trade restrictions which excludes Google services from being pre-installed on their smartphones.  The US trade ban is, to say the least, a challenge for the P40 series to be marketed outside of China.  Hence, Huawei is pouring in as much technology as possible in their flagship phones hoping to capture consumer’s attention.  In the case of the P series, it just happens to be mobile photography.

There are parallels between the ongoing pandemic and Huawei Mobile’s business.  Just as social distancing and lockdowns are imposed by various countries, Huawei’s GMS ban essentially has the OEM brand locked out of the international markets which had seen significant growth in recent years.  Just as global economies shut down in order to prevent additional casualties from COVID-19 in hopes of a quick recovery on the other side, Huawei Mobile is continuing to invest in hardware improvements that keep their brand relevant even if the OEM currently doesn’t have approval for GMS.  The P40 series is a demonstration of Huawei’s commitment to creating great hardware and photographic experiences.  However, without Google services, all that great hardware being developed may be all for naught.

Huawei’s P40 and the subsequent Mate 40 designs later in 2020 will serve as a barometer of the OEM’s perseverance in these difficult times.  The world’s #3 smartphone manufacturer has already warned of a significant drop in business in 2020 due to non-market forces like trade bans.  Obviously, the current crisis will only add to the expected market challenges. Huawei will have to rely on the Chinese domestic market for the bulk of their sales this year.  However, depending on the directions of the US election and the on-going Chinese and US trade talks, Huawei still have a fighting chance to come out of a tough 2020 and continue to be successful.