The traditional conversation of ‘public versus private’ is outdated as technologies such as private LTE become viable options for utilities.

More AMI devices than ever before

There were 368 million electricity, gas, and waters shipped in 2019, with nearly 45% of those meters being communicating. This shift to smart metering has predominantly been driven by the enforced demand of legislation, such as throughout Europe with the EU Directive targeting 80% adoption of communicating meters.

However, as many of the legislative waves move to completion there is a change in phase for the industry, with organic demand from utilities themselves on the increase. As the communicating technologies mature and more applications are found for using/monetising meter data, utilities can start to drive their own agenda and technology choices.

As AMI continues to gain traction (especially in new or developing markets), the choice of potential communication technologies also continues to expand. The traditional technologies, such as FN (Fixed Network) and PLC (Powerline Communications), still dominate the communicating meter market overall but the emerging trend suggests a move towards new technologies for some utilities.  Whilst some of the most exciting opportunities exist in distribution grid applications (such as distribution automation), there is opportunity within smart metering too.

The introduction of Sigfox in 2009 and LoRa in 2010 was initially heralded as the start of the shift away from FN and PLC. However, the utilities industry is risk-averse and any new technology takes time to gain a foothold in the market.  As a result, utilities tended to often stick to the ‘tried and tested’ solutions, especially in more established markets.  Regardless, these technologies saw enough of an interest that it caused a reactive response from the telecommunication industry, thus resulting in the creation of LTE-M and NB-IoT.

Public networking has several perceived benefits compared to private networks: such as lower CapEX costs, higher speeds, lower latency, and higher data rates.  However, in the initial battle between public and private technologies, it was often the benefits of having a dedicated, private network that won the argument for early AMI deployments.

The Smart Utility Meter Intelligence Service from Omdia counts LTE-M and NB-IoT as part of the ‘advanced cellular’ technologies category. The choice of whether or not to shift to these technologies is typically driven by organic demand (i.e. individual utilities choosing), with only China really enforcing any demand with for NB-IoT to date.

In 2018, LPWAN and Advanced Cellular therefore accounted for only 4% of communicating meters shipped (with the majority of that being LPWAN). Advanced cellular will see the greatest growth over the next five years, largely driven as the Chinese government are heavily pushing NB-IoT. However, the development of both NB-IoT and LTE-M will also create a viable public/private hybrid option that would be beneficial to the utility industry; bringing the benefits of public technologies (such as scalability, cost) but with the benefit of a private, secure channel on the network. This fundamentally changes the traditional ‘private versus public’ conversation for all utility networking, including for smart metering. 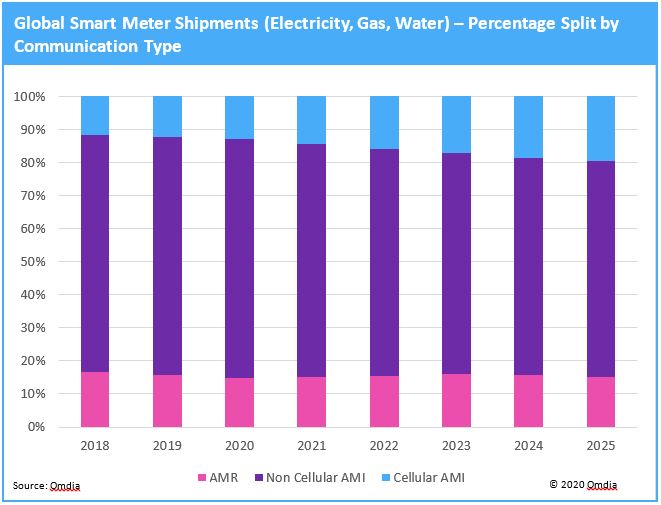 Not the end of traditional private networks

There will be over 11 billion communicating meters installed worldwide by the end of 2025, with the conversation around networking technology continuing to evolve throughout that time.  Clearly, the binary choice between public and private technology will end; instead, the decisions will increasingly come down to the best balance of technical suitability and total cost of ownership, with a range of options from fully public to fully private available.

With the privatisation capabilities coming to LPWAN and cellular technologies, the traditional communication technologies of RF and PLC will slowly lose market share overall; especially as Advanced Cellular rises to 14% of the overall product mix by 2025. However, these technologies will not become obsolete due to the significant investment already in place in regions such as Europe and North America. It is more likely that the associations and companies involved with FN and PLC technologies will create further advancements, and allow these technologies to remain a strong competitor in the communicating meter market.

No single solution will ever ‘win’ for utility connectivity and a range of solutions is required – but the rise of Private LTE-M and NB-IoT is sure to evolve the conversation, even for the slow-moving utility industry.

Please contact us for more information about our research within the Smart Utility Meter Intelligence Service. 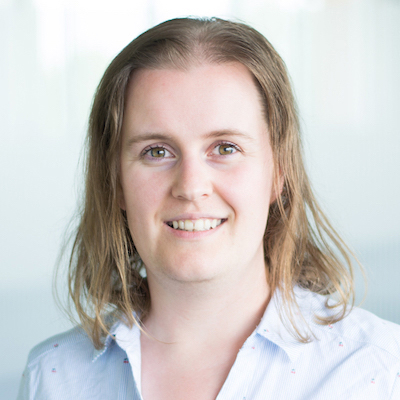 Susanne focuses on industrial communications, discrete machine-safety components, and switchgear as a member of the manufacturing technology team. Previously, she worked at Cranfield University as a research assistant. Susanne holds a Bachelor of Science (Hons) in physics with astrophysics from Nottingham Trent University. She is based in Wellingborough, UK.