Last year, Samsung celebrated 10 years of Galaxy flagship smartphones with the Galaxy S10 line.  This year, the emphasis is on what is possible in the next decade of smartphones.  In the new Galaxy S20 series of flagships, all variants come with 5G capability built in – a first for any OEM.  While the Plus and Ultra models feature millimeter wave and sub 6GHz 5G RF front ends, the base S20 model comes with only Sub 6GHz 5G [due to its smaller size].

With the new Galaxy S20 series, Samsung intentionally switched up the flagship line of Galaxy in terms of market positioning.  Flagship smartphones in 2020 will now have to have 5G capabilities since the bar has been set by Samsung.  In other words, 5G has become table-stakes for premium devices this year. 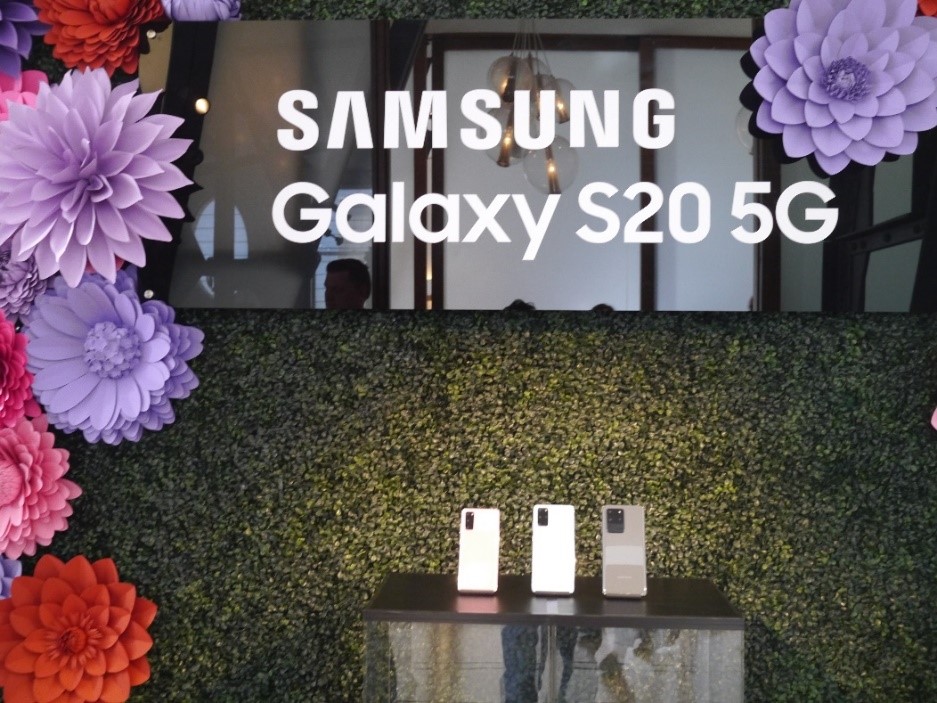 Compared to the S10 series of 2019, which started with a more affordable S10E, the new S20 series starts with a base S20 model at $999 and tops out with the S20 Ultra edition at $1599. The move to jettison the ‘E’ model introduced last year signals Samsung’s intent to make the S20 line more exclusive and, ultimately, more profitable.  With the global smartphone industry moving into an anticipated decade of single digit growth, the smartphone business model must reflect that shift in consumer demand.  By pushing premium device prices ever higher, smartphone OEMs can justify the additional value by pumping in feature after feature.  A higher selling price also equates to better margins for the manufacturer which is critical for long term viability of smartphone OEMs. These price hikes will become the harsh reality of a maturing smartphone market where OEMs are essentially replacing volumes for margins as a mean to remain viable in the long run.

Catching up on mobile photography

The star of the new Galaxy S20 line is the Ultra model which comes with a brand-new camera system.  Samsung has implemented a periscopic, or folded, optics solution to create a variable optical & digital zoom capability when using all three primary cameras together.  The marketing term Samsung bestowed on this new camera setup is “space zoom” which touts the ability to achieve an equivalent 100x zoom – currently the largest zoom factor for a smartphone.  Samsung is only the third smartphone OEM to adopt this type of mobile camera system (Huawei and OPPO have similar periscopic cameras on their 2019 flagships).  By bending the telephoto lens 90 degrees, periscopic lenses allow OEMs to keep phones thin. Telephoto zooms require longer focal lengths and therefore longer lenses but as we know, there is a finite space on the z-direction of the smartphone. By folding the optics, a zoom lens assembly can fit into the width of the device. This engineering trick is made possible by increasing the size and volume of the device.  For the Samsung Galaxy S20 Ultra this means that the phone scaled to 6.9-inches diagonally, giving ample room to include the periscopic camera assembly. 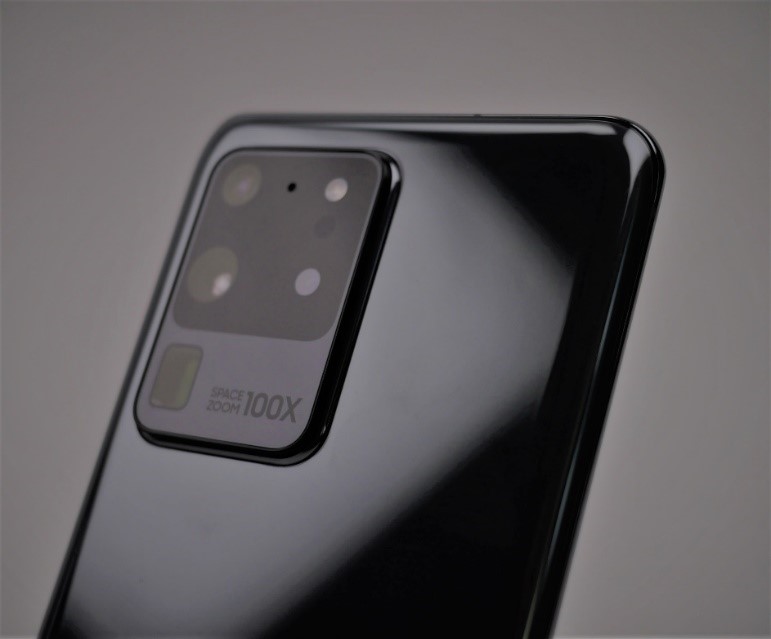 Additionally, Samsung is catching up on low light or night photography mode which was popularized by Google, Huawei and Apple.  With the new optics across all three variants, Samsung has implemented a night mode that takes advantage of all the available sensor pixels.  By “binning” pixels together (9 pixels = 1 binned pixel), Samsung can effectively create larger imaging pixels that collect more light in dark situations [0.8um for the 108MP sensor and 2.4um for the 64MP sensor].  This technology is like the solutions implemented by competitors, but it’s the software execution that should create an improved camera experience. Samsung has revamped the user interface in the Galaxy S20 line.

Samsung introduced what they call the “single take” mode in the Galaxy S20 series which, combined with AI capabilities, can automatically curate and produce various “best shots” of both photos and video (up to 10 seconds).  This feature is ideal for capturing subjects that are notoriously difficult to shoot and allows for some delightful outputs.

With mobile gaming on smartphones becoming more and more popular, Samsung decided to use a display with 120Hz refresh rate along with a more elongated display aspect ratio. Here, Samsung is also playing catchup to the niche gaming smartphone segment.  By adding higher refresh rates on the Galaxy S20, Samsung hopes to attract mobile gaming enthusiast to the Galaxy platform while not alienating traditional consumers by sticking to a more conventional overall design.  Further, the elongated aspect ratio helps in both ergonomics and video content playback.

While we can list the exhaustive feature list on the Galaxy S20, it’s informative to highlight some of the major upgrades and changes.  As we enter the new era of 5G, the industry finds itself in the strange position where wireless data speeds can be faster than the speed in which information is transferred from SoC to the SDRAM.  For the Galaxy S20 series Samsung is using low-power double data rate version 5 (LPDDR5) for the volatile memory portion of the devices.  LPDDR5 is the newest SDRAM industry standard which allows for information to move faster than the data rates coming out of the 5G modem.

Also, Samsung increased the base SDRAM capacity to 12GB.  Coupled with the fast LPDDR5, Galaxy users can preload applications directly onto memory for instant access.  This feature is ideal for mobile gaming where the wait times during start up of a game can be excruciatingly long.  By pre-emptively loading the most frequently used apps, the user experience will be greatly improved and even allow for a unique enterprise use case where lots of data is being moved about.

The Galaxy S20s come with an eSIM chip that allows for true dual-number-use with unlocked versions of the device.  Dual number connectivity has been available for years, first as a physical additional SIM and then eSIM which was popularized by the iPhone Xs.  Further, since the Galaxy S20s are using the latest Qualcomm Snapdragon 865 platform, Samsung can tap into the embedded secure element capabilities of the SoC to improve security and enterprise creditability.  The company envisions a future where digital driver’s license and crypto currency can be stored on device and cannot be altered by software hacks.

The Galaxy S franchise and Foldables

In order to remain competitive, smartphone OEMs are locked in an arms race of feature enhancements. Samsung launches the first salvos in 2020 with an improved and fully 5G capable Galaxy S20 range in their continuing bid to extend the value of the Galaxy S franchise.

However, the industry is reaching a point where evolution of the smartphone form factor will eventually hit its limits – sooner rather than later.  Yes, better features and capabilities can be included every year without drastically changing the existing design, however, the display size – hence device size – is not expected to grow beyond the capacity of a one-handed use scenario.  What then will the industry do?  For Samsung, the answer is clearly foldables.  After a tumultuous start in 2019 with the Galaxy Fold, we expect Samsung to come back with more foldable designs that prove the company’s flexible display technology and show new use cases pointing to the future of the product category.  Samsung hopes the foldable display form factor is as disruptive to the smartphone industry as the Note series was [which drove the rest of the industry to larger and larger displays].  Ultimately, the flexible display technology is still immature and will take some years before it can be produced reliably and at a reasonable price.

Thus, we have come to the start of the end of the smartphone as we know it.  The future ever-present device in our pockets will look and function quite differently.  Samsung is banking on the disruptiveness of foldable designs as the industry nears the end of the line for the conventional fixed display smartphone design.