After suffering a sharp decline in penetration among U.S. Latino viewers in late 2018 and early 2019, Netflix has made a comeback due to its extensive investment in Spanish-language content.

After suffering a sharp decline in penetration among U.S. Latino viewers in late 2018 and early 2019, Netflix has made a comeback due to its extensive investment in Spanish-language content, according to IHS Markit | Technology, now a part of Informa Tech.

Netflix’s penetration among Latinos in the United States fell by 9 percent during the period from November 2018 through April 2019, as revealed by consumer surveys conducted by the Consumer Research - Devices, Media & Usage Intelligence Service – Premium. However, Netflix managed to reverse some of the declines during the following six months, with the penetration rising by 4 percent at the expense of competitor Amazon Prime Video.

“The movement of Latino audiences from Amazon to Netflix reflects the two services’ level of investment in Spanish-language content,” said Fateha Begum, principal research analyst at IHS Markit | Technology. “Although Amazon leads in overall video content, with a total of 3.4 million hours of programming, Netflix offers 15 times more hours of Spanish-language content than Amazon Prime Video. In terms of total hours of Spanish programming, Netflix is the clear leader in the U.S. video streaming market, followed by Hulu.”

One in five U.S. Latino survey respondents that subscribed to Netflix in the past year cited “local content” as the reason for subscribing to Netflix.

U.S. consumers are increasingly prone to add or drop video services—a trend that’s even more apparent in the Latino community.

One in five U.S. households cancelled a video service over a 12-month period and did not return, according to the survey that was conducted in November. Concurrently, nearly 30 percent of over-the-top (OTT) subscribers signed up to at least one new OTT service during the same period. Consumers also cancelled and re-subscribed to video services to watch new seasons of content.

This phenomenon is even more dramatic when looking at Latino audiences in the U.S., as Latinos are twice as likely to cancel and re-subscribe to a video service as other consumers and 50 percent are more likely to use a free trial only than the average consumer.

Prime Video was the most cancelled video service among Latinos, while Netflix took the top spot among all respondents. The picture was very different one year prior, as Prime Video was nearly equally as likely to be selected as a subscription driver to Amazon Prime among Latinos. 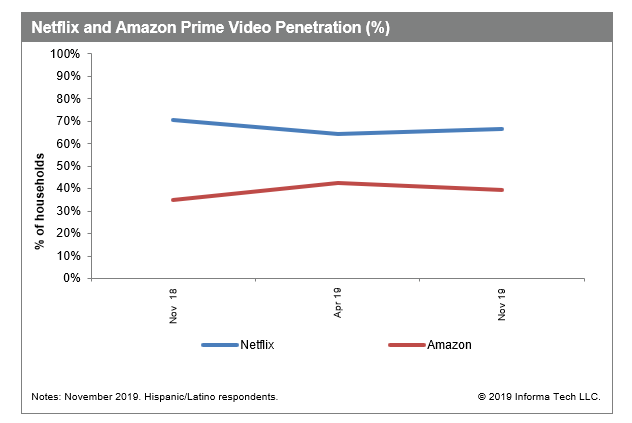 The movement to Netflix and away from Amazon is in line with the two services’ investment in Spanish language content.

Netflix’s investment in Spanish content has increased considerably in the past years as the global video service seeks to increase its subscriber base globally following a plateau in its U.S. subscriptions. Nearly 14 percent of Netflix’s catalog was comprised of Spanish language content in September 2019, with the number of hours increasing by 12 percent when compared to the end of year of 2018.

While Netflix increased its Spanish language content by nearly 30,000 hours between December 2018 and September 2019, Amazon saw a decline of 2,000 hours. The majority of the change occurred in the first half of the year for both video services and mirrored the trend in penetration among Latino respondents. 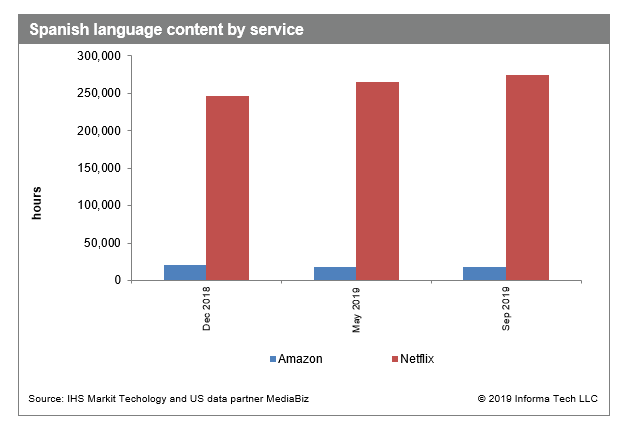 Content clearly plays a role in the longevity of online video services, particularly as consumers can now choose from a plethora of services. Latino audiences in the consumer survey reinforced the importance of content in the acquisition and retention of consumers. However, the on-demand nature of uptake, which sees a higher degree of flexibility for consumers, must also be reflected in device distribution.

Device distribution plays a key role in subscription choices for Latino audiences. Latinos are more likely than the average consumer to select a wider range of devices and to watch on a specific device. While connected-device penetration tends to be marginally lower in Latino homes, the demand for device accessibility likely stems from larger family sizes as they are more likely to live in households with four or more people.

OTT around the world

Global OTT video subscriptions are set to exceed 1 billion in 2021, a figure only recently passed by traditional pay TV in 2017. In the United States, a market affected by high pay TV churn, OTT subscriptions overtook pay TV in 2016 and by year-end 2023 IHS Markit | Technology expects there to be four times as many OTT subscriptions as pay TV. With greater choice and flexibility for consumers, allowing better movement between services, customer retention is becoming a key challenge for video services in the U.S. and around the world.

IHS Markit | Technology analysts Maria Rua Aguete and Tim Westcott will be attending NATPE Miami on January 21-23. and will be available for media commentary. Contact jonathan.cassell@ihsmarkit.com if you would like to speak to them. 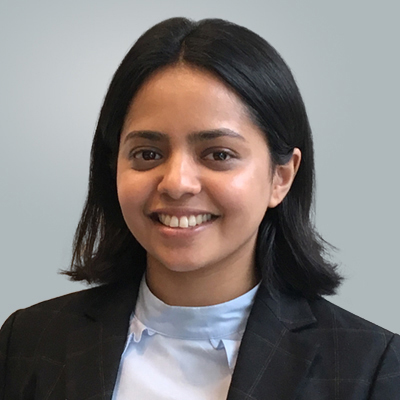 Fateha oversees the tracking and analysis of key trends in consumer devices, TV and online video, and operator strategies with a focus on changing behaviors in video consumption. She also liaises with key industry players, leads Omdia’s consumer surveys, contributes to a range of ad hoc consultancies, and speaks at industry events.

Before returning to Omdia in 2017, she worked at Sky UK, gaining experience across Sky's portfolio of set-top box and OTT on-demand services, including NOW TV, Boxsets, Sky Q, and Sky Go. There, she scoped personalization and content recommendations, led growth plans for the Sky Kids App, and reviewed Sky's TV apps strategy. Fateha joined Screen Digest (now Omdia) in 2010, where her work spanned TV media, home entertainment, and broadband media. She tracked developments in pay TV on demand at the operator level, covering over 50 countries. Fateha holds a Bachelor of Science in economics from Royal Holloway, University of London.