Call of Duty Mobile had a strong start, but can it go the distance?

Despite seeing record-breaking downloads and high revenue in October, Call of Duty (COD) Mobile entered a post-launch waning period in November. This is not unusual for a new release, but the recent growth of several long-standing titles has created an increasingly competitive environment amongst the top-performers. As a result, COD Mobile has been nudged out of the top 20 for net revenue, despite user numbers remaining robust.

Despite seeing record-breaking downloads and high revenue in October, Call of Duty (COD) Mobile entered a post-launch waning period in November. This is not unusual for a new release, but the recent growth of several long-standing titles has created an increasingly competitive environment amongst the top-performers. As a result, COD Mobile has been nudged out of the top 20 for net revenue, despite user numbers remaining robust. 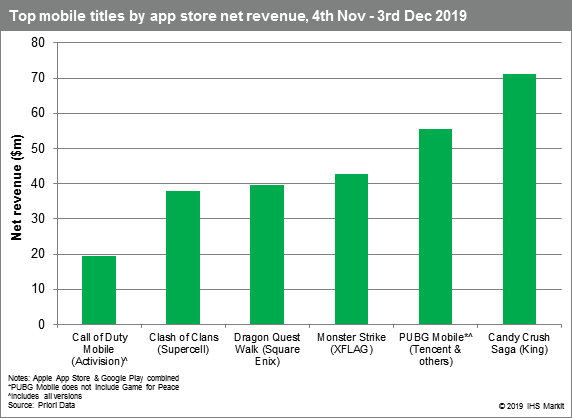 Dragon Quest Walk prospers in Japan thanks to soaring ARPU

This chart demonstrates the recent performance of a selection of high-profile titles in comparison with COD Mobile, according to Priori Data. For the 30 days covering November 4th to December 3rd, familiar games have seen somewhat of a resurgence within the top 10 – whilst COD Mobile lags behind at rank 25 by net revenue. PUBG Mobile is maintaining and building on its success, with seemingly little impact from similarly-themed COD Mobile: users are thus far not being cannibalised. XFLAG’s Monster Strike and Roblox Corp’s Roblox have seen substantial growth, whilst Dragon Quest Walk – the recent, Japan-only, location-based Pokémon Go-style title from Square Enix – has surged.

This means two of the top six titles by app store net revenue are thriving on an exclusively Japanese audience. Compared with the other top performers, the MAUs for these titles are noticeably low, evidencing the prevalence of high-spenders in the Japanese market.

Despite COD Mobile net revenue seeming modest, its MAUs are comparatively quite high. This is indicative of its popularity in emerging games markets such as India, Brazil and wider South America where spend per user is low despite a broad reach and high levels of engagement.

Updates drive revenue to launch levels, but for how long?

A new, time-limited Zombie Mode launched on November 23rd. This is a familiar feature for Call of Duty players on other platforms and so was highly anticipated. The mode was already present as an option in-game but was greyed out and un-selectable. This was likely implemented as a way of building hype, and to encourage users to continue playing beyond the launch spike. An end date has not yet been announced, but the limited time nature of the update has been poorly received by some. With this, it is also teasing an extension to the length of the mode based on its popularity – its approach feels somewhat experimental.

Activision as a publishing division has less direct experience in terms of mobile games – although of course the broader company is home to King which is vastly experienced in the mobile games market. However, with the support of industry heavyweight Tencent, Activision is delivering on-going, regular updates to COD Mobile – a strategy which has contributed to Tencent’s PUBG Mobile amassing and maintaining a vast user-base.

As an example of this, a significant update including new maps, a Battle Pass and PS4 and Xbox One controller support was released on November 25th. As a result, the game was able to re-capture its post-launch levels of net revenue moving into December, but this was not enough to dethrone the more established titles. We will probably not see a more substantial boost to the game this year given the size of this update, and so further growth in Q4 seems unlikely.

Chinese audience may not support longevity, but approval seems likely

COD Mobile has not been approved for release in China yet, but there are indications that the Chinese market would not grow the user-base sustainably and its prospects there are uncertain. Call of Duty is traditionally a console-focused franchise, and the console market in China is small compared to the PC and mobile games markets. PC versions of the game are available and are comparatively more accessible, but have not performed especially well, suggesting there is a less entrenched desire for CoD titles in mainland China. What’s more, pure FPS titles have failed to gain traction on mobile in China, suggesting that there is little appetite for the genre amongst smartphone gamers.

However, with domestic company Tencent driving the title in China, player numbers could still be healthy – especially initially – and given the size of the Chinese mobile games audience, this could translate to a notable contribution to overall performance. What’s more, whilst PUBG Mobile struggled to gain government approval and Tencent eventually capitulated, COD Mobile will likely fare better. PUBG Mobile faced numerous challenges. Due to political unrest, Korean games have previously been refused licenses for distribution in China, and PUBG’s parent company is Korea-based Bluehole. Also, authorities in China are critical of the assumed values being promoted to Chinese youth through battle royale-style games. Whilst COD Mobile does feature battle royale matches, this is only an optional mode and does not represent the core structure of the game.