Analyst Opinion 01 Sep 2020 Gerrit Schneemann
Contents
Samsung adds yet another foldable smartphone to its existing portfolio of such devices. With the Galaxy Z Fold 2, the company is following up last year’s model with 5G connectivity and a larger external display but launches into a difficult market.

Samsung adds yet another foldable device to its existing portfolio of such devices. With the Galaxy Z Fold 2, the company is following up last year’s model with several hardware and software improvements. Both enable users to take better advantage of form factor and go a long way to justify its existence.

However, the super-premium device launches into a different marketplace than last year’s model, or even the recently updated Z Flip 5G. While the $1999 starting price tag is only slightly higher than that of the original Fold ($1980) and improvements like 5G connectivity and larger external display check all the necessary requirements of a device in this price segment, potential buyers continue to face a global pandemic and the associated economic uncertainties.

The biggest physical change for the Z Fold 2 is the larger external cover screen. Now, a 6.2 inch AMOLED display gives users the option of a complete smartphone user experience when the device is folded. On the first generation of Fold, a 4.6 inch external display severely limited extended usability when folded. Apps could not be used to their full potential in a satisfactory way – forcing users to open the device completely.

With the new, larger, external screen Samsung is enabling a standard smartphone user experience for the front of the device. Not only can users achieve more with the device folded, but Samsung eases pressure on itself and app developers to alter their applications to optimize for the smaller front screen. Now, Samsung and partners can focus on the user interface on the foldable screen.

Multi-tasking has been enhanced with the ability to have three applications running in separate windows at the same time. Further, users can change the layout of the windows and save favorite app combinations in the edge screen menu for easy access.

Samsung partners with Google and Microsoft to optimize many of their respective applications: Google Maps seamlessly moves between the small screen and tablet mode. Microsoft Office applications add desktop-like command bars at the top of Word and Excel. Outlook utilizes the larger screen by showing the inbox pane on one side and the selected email on the other – eliminating the need to move between screens when trying to read a message. Beyond core apps from Samsung, Google and Microsoft, however, only Spotify is currently fully optimized.

The greater utility of the cover screen helps mask the current lack of third-party support for the fully optimized user experience. With the original screen, the lack of optimized applications was more noticeable to the end-user.

Samsung is bringing Flex Mode from the Z Flip devices to the Fold. With Flex Mode, user can take advantage of the unique form factor of the device more fully. Taking pictures can be enhanced by placing the phone on a stable surface and having the device partially unfolded. Video content can be viewed on one side of the screen, while the other displays comment sections or a list of other videos.

As photography continues to be a key feature for smartphones, Samsung increases the integration of the rear, main, cameras into the overall photography experience. Taking selfies or pictures of others can now involve the external screen and allow subjects to find the right pose and picture composition. The Z Fold 2 is not a world-beater in camera specifications, but the rear triple camera set up provides variety with a ultra-wide angle lens, as well as a wide-angle and telephoto lens.

So far in the life cycle of foldable smartphones, Samsung has dominated shipments, with Z Flip devices. In the first half of 2020, Samsung shipped around 830,000 Z Flip units. During the same time, Samsung shipped 80,000 Fold units. At around $1400, the Z Flip devices are not cheap smartphones, but are $500 cheaper than the Galaxy Z Fold devices. The hardware improvements should help Samsung increase shipments of the Fold series.

While Samsung is not the only OEM shipping foldable smartphones, competitors Huawei and Motorola have faced difficulties launching their respective devices. The long-awaited Motorola razr, for example, launched right into the global pandemic hindering its carrier-heavy US launch. 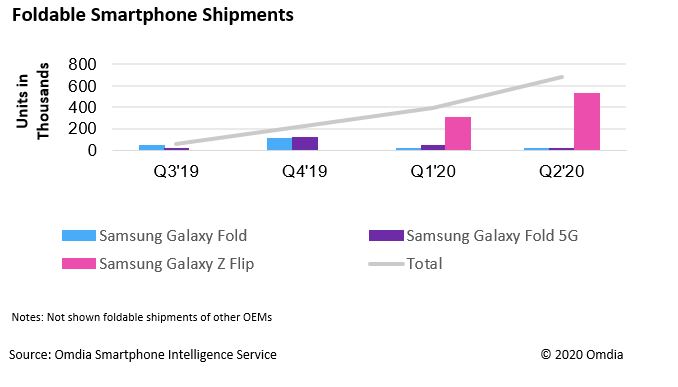 Foldables will remain niche form factor for some time

Omdia anticipates foldable smartphone shipments to reach three million units in 2020, up from 0.3 million units in 2019. Further growth is anticipated for 2021 to reach nine million units. However, pricing for this form factor will remain relatively high and therefore limit the potential reach of foldables for the foreseeable future. Foldables will not cross the one percent penetration rate until 2021 as share of the overall smartphone market.

In recognition of the challenges associated with a super-premium price point and a global economic contraction, Samsung is launching the device with multiple financing offers and incentives.

Buyers of the new device can get up to $800 in trade-in value for a first-generation Galaxy Z Flip to reach a $25 per month payment, for example. It is also possible to use Samsung’s Guaranteed Buyback program, which requires buyers to pay 50% of the retail price in 20 monthly payments and then return the phone for an additional refund. On AT&T, the device costs $66.67 per month for 30 months. 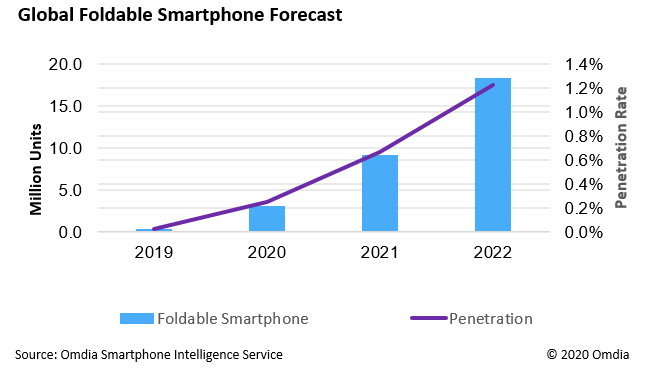 The new Galaxy Z Fold 2 represents a significant upgrade to the first-generation product. It launches at a time where this form factor is gaining more traction, in various forms. Microsoft just announced its dual-screen Surface Duo device, Huawei has foldables in its portfolio, LG continues to embrace dual-screens with the Velvet and Motorola will not let the awareness momentum the company gained with the launch of the new razr slip away without adding new products to the portfolio.

Even though the form factor is gaining traction, the device also launches into an economic environment where premium smartphones face stiff competition from capable lower priced handsets and an increased sensitivity from consumers to the cost of premium devices.

Samsung has the potential to further expand its lead in the foldable space. It is also a company that has the scale to drive consumer education and marketing efforts with longevity, with an eye to the future when economic conditions have improved and prices for foldables start to decrease.