Epic Games’ Fortnite feud with Apple is escalating, but the iPhone manufacturer has more to lose

In mid-August, without warning, Epic updated its Fortnite game app with an unapproved payment mechanism, offering mobile players a 20% discount on in-app purchases if completed via Epic’s own website. Apple and Google subsequently removed the game from the App Store and Google Play.

Epic Games is a vocal critic of what it perceives to be unfair revenue shares on platforms selling third-party games content. It has publicly condemned leading PC storefront Steam, as well as the mobile app store duopoly Apple App Store and Google Play for perpetuating the industry standard 70/30 revenue split – whereby the platform takes a 30% cut of developer revenue.

In mid-August, without warning, Epic updated its Fortnite game app with an unapproved payment mechanism, offering mobile players a 20% discount on in-app purchases if completed via Epic’s own website. Apple and Google subsequently removed the game from the App Store and Google Play. Users with the game already installed can still play, but they will be unable to download any new updates or versions as long as Fortnite is unavailable for download.

The current dispute centres on Apple, which operates a walled garden approach to its operating system and app store. Apple does not allow third-party app stores into the iOS ecosystem, and all content must pass Apple’s approval process before being made available to consumers via the official App Store. Google, on the other hand, does not prevent third-party app stores from operating on Android devices, and also permits apps to be sideloaded through direct links.

Unreal Engine under threat, but impact is tempered by mobile developers’ preference for Unity

Following Fortnite’s removal from the App Store, Epic Games filed a lawsuit against Apple and soon after, Google, accusing the companies of unlawful and anti-competitive store policies. In retaliation, Apple has decided to revoke Epic’s entire developer account, preventing the company from accessing the development tools necessary to create software for Apple’s platforms: Mac and iOS. This means that from August 28, Epic will no longer be able to access software development kits (SDKs), application programming interfaces (APIs), and will be prevented from updating Unreal Engine for use by third-party developers.

In short, Unreal Engine would become a dead-end technology for mobile and Mac developers, and this could impact a handful of high-profile games such as Tencent’s PUBG Mobile and it’s China-only equivalent, Peacekeeper Elite. As such, the fallout would be felt globally. However, only a minority of mobile games are built using Unreal Engine, which is far more popular on PC and console platforms due to its perceived suitability for AAA games and high-end graphics. Unity is the market leading engine for mobile games: it is more established in the space, offers superior support for 2D games, and can navigate the limitations of mobile devices more competently.

The impact of rendering Unreal Engine unviable to developers is therefore difficult to quantify, but it is important to highlight the significance of the game engine for Apple. Numerous Apple Arcade developers use it and, ultimately, fewer mobile games on the App Store translates to a reduction in revenue for the iOS creator. However, given the high revenue opportunity rooted in Apple devices, it is likely that developers will look to alternative engines in order to maintain their App Store presence. This would take time, though, and short-term losses seem inevitable.

The App Store is a golden goose, and Apple will do anything to protect it

Hardware sales have been slowing, and along with many other companies, Apple has been trying to boost long-term stability by diversifying and cementing its revenue streams. This strategy includes a renewed focus on services, which has accounted for an increasing share of company revenue in recent years. The bulk of these “services” profits are surely generated through Apple’s 30% cut of App Store revenue, and they amount to billions of dollars every year. 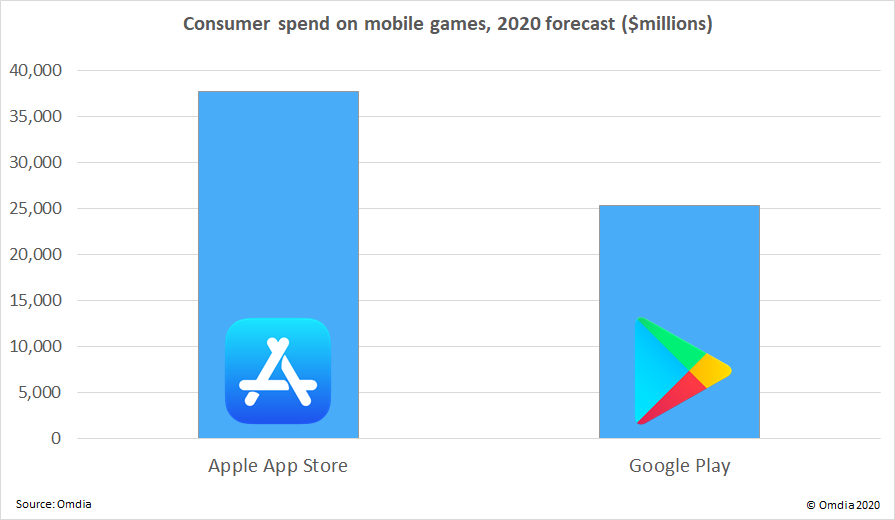 Apple device users tend to have far greater spending power than the Android audience. Omdia data indicates that more than 50% of global mobile games spend will be generated through Apple App Store this year, with Google Play only accounting for 34%, despite far greater device penetration. It is therefore no surprise that Apple hopes to maintain its closed eco-system and revenue share policies, but also that multiple other companies are so keen to gain exposure to the lucrative Apple audience.

Is Apple’s walled garden too high?

The pressure on Apple to loosen its restrictions is mounting, and it will only intensify in the coming months as increasing numbers of games distribution platforms battle to gain access to the millions of high-spending iPhone and iPad users across the world. The advent of cloud gaming will be crucial in terms of tipping the balance. Google Stadia, Nvidia GeForce Now and more recently, Microsoft’s Xbox Game Pass (and subsequent xCloud service) and the Facebook Gaming app have all been prevented from operating as intended on iOS. Users can typically utilise the apps to manage their accounts cross-platform, but not to access or play any games. Developer rules disallow an app from acting as a game repository that contains content from other publishers.

What is the most likely outcome?

Ultimately, Epic cannot lose in this situation. If it fails to win the lawsuit – which seems likely – it can simply remove its alternative payment option from Fortnite and see the game returned to the App Store, essentially going back to square one. If addressed prior to August 28, Epic would also avoid having its developer tools access revoked. Although there has been no confirmation from Apple, it seems likely that even after this date, compliance with Apple’s developer rules could see Epic’s Developer Program membership reinstated. Unreal Engine remains an important source of revenue for Apple, too.

Even if Epic loses this lawsuit, the furore surrounding this dispute could go as far as to influence on-going anti-trust investigations which are assessing whether Apple’s rules for app developers on app distribution violate EU competition rules. As such, we could see a blanket change to App Store policies in the future and, although Epic will not be the sole instigator, its actions may tip the balance for lawmakers.