On April 8, nearly five months after the launch of Stadia, Google offered a two-month free trial for Stadia Pro. After the free trial was introduced, daily downloads of the Stadia app spiked by almost 1700%.

On April 8, nearly five months after the launch of Stadia, Google offered a two-month free trial for Stadia Pro. The trial extended to all 14 supported countries, and offered free access to nine games including Destiny 2, PUBG, Steamworld Heist and Zombie Army 4. Once the free trial ended, players had to pay $9.99 per month to continue to access Stadia.

In March, the Stadia app was downloaded an average of 1,739 times per day across App Store and Google Play. After the free trial was introduced, according to Priori Data, daily downloads spiked at almost 32,000 – an increase of 1700%. However, the rate of installs quickly normalized, and now sits around pre-trial levels at less than 5,000 per day. 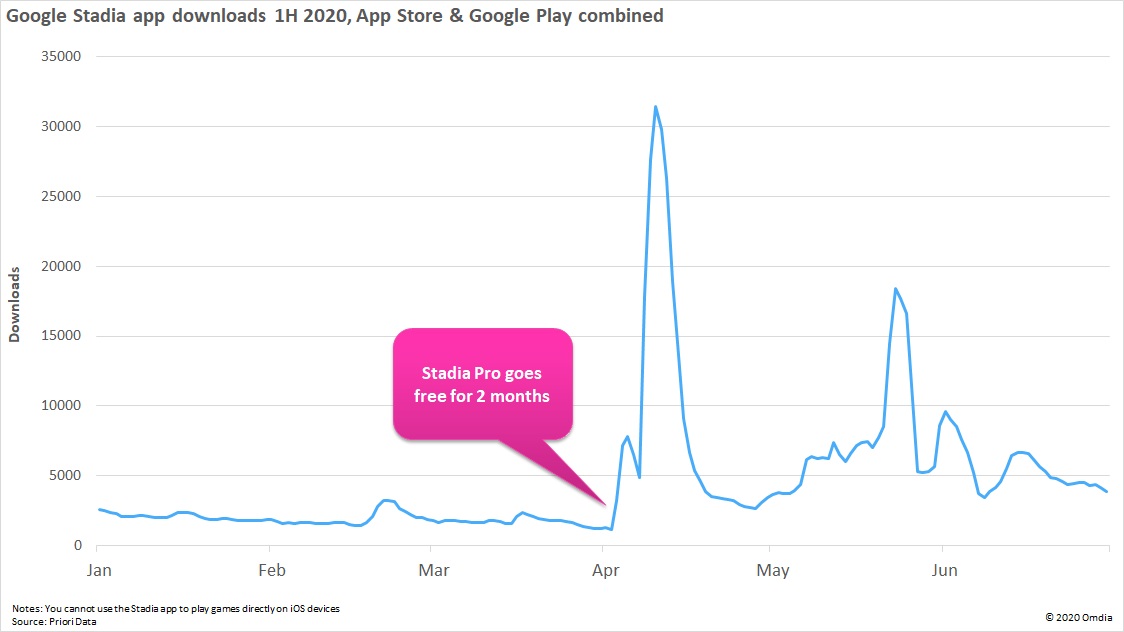 This illustrates the importance of lowering the entry barrier for new services, and it perhaps also indicates that it is never too late to galvanize an audience. Retention, however, is extraordinarily low for the Stadia app – with just shy of 16% day 1 retention, dropping to 0.7% at day 30 on Android devices, which suggests that the content is not compelling enough to afford stickiness.

What’s more, users cannot play games directly via Google Stadia on iOS devices, due to App Store guidelines. Other games streaming and library-based services such as Nvidia’s GeForce Now and, more recently, Microsoft’s Xbox Game Pass with integrated xCloud, have also been prevented from operating on Apple devices. iPhone users can only use the app to manage Stadia on other devices.

The extremely low levels of retention are partially a result of the premium business model used by Stadia. At a price of $9.99 per month, Pro membership gives users access to a handful of titles for free. However, the vast majority of the library is still paid downloads with premium price tags.

It feels alien as a consumer to be faced with a $60 paywall for a game on mobile, even if the games are AAA offerings. As such, cloud gaming accessed via the mobile platform is more likely to thrive on a business model with minimal – if any - upfront payment.