5G smartphones have now been on the market for over a year. During this time, the market has changed significantly.

5G smartphones have now been on the market for over a year. During this time, the market has changed significantly. 5G connectivity is not reserved for high-end flagship devices anymore. In fact, 5G phones are available for prices of under $300.

This week (June 20, 2020), OnePlus and LG announced new mid-range devices. In the case of LG, the Velvet has been available in Korea for some time but will now come to the US. OnePlus’ Nord is targeted at users in India and Europe. Both are 5G enabled devices, with prices under $500.

While the overall market faces a difficult 2020 because of the Coronavirus pandemic, smartphone OEMs continue to release new devices with 5G connectivity. A trend emerging in 2019 has intensified in 2020: 5G connectivity is pushed to consumers by smartphone brands – regardless of the current state of network availability or differentiated 5G service and application offering. 5G smartphone shipments should reach over 200m units in 2020, up from 16m units in 2019.

Omdia’s Active Installed Base (AIB) data, which generates real-time insights by tracking app and website connections on any type of wireless connection, shows that in 5G early adopter countries, handsets are still mostly accessing older network generations by some margin. Only in Korea do 5G networks provide access for users in a significant way.

In the Korean market, all related parties are driving 5G in unison: Network providers (using promotions and incentives to drive upgrades), OEMs such as Samsung and LG (release their flagships only as 5G-enabled devices) and the government, have focused on the roll-out of 5G networks – making sure that the country’s carriers were able to launch their networks at the same time as Verizon Wireless in the US. Since the race to launch first, both markets have taken different paths to further coverage expansion and device availability. 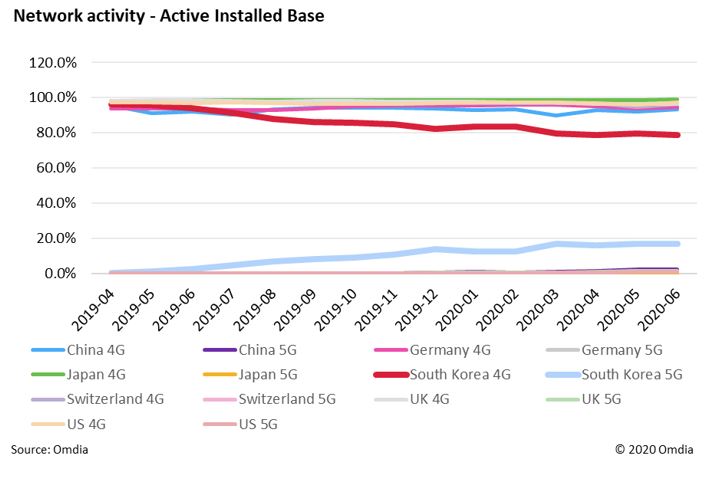 5G handsets are just starting to reach the mid-range pricing segment in the US market. Until now, the focus has been limited to premium devices. Additionally, the US market is dominated by Apple, which does not yet support 5G, and Samsung, which is starting to roll out 5G-enabled A-series devices. Unlike other markets, US consumer do not get access to OEMs like Xiaomi or OPPO through traditional smartphone sales channels at the carriers. With the LG Velvet, Samsung is now getting competition at the major US carriers in the mid-range price segment.

The pandemic has impacted smartphone sales in the US, where carrier stores are essential locations for users to purchase their devices. Combined with an extending economic crisis and, so far, limited device portfolio is hindering the proliferation of 5G devices in this market.

In Europe, the current utilization picture is like that in the US market. Even though carriers in markets like Switzerland and the UK launched in the early part of 2019, traction for 5G networks has been hard to come by. In addition to launching early, European carriers offered a wider variety of 5G-enabled models than carriers in the US. In the UK 1.4% of traffic in our survey came from 5G networks in June, like the 1.3% in Switzerland at the same time. Last year, 5G traffic was well under 1% in both countries.

Coverage of 5G networks remains spotty in many European markets, reducing the incentive for users to upgrade their existing phones at this point. Further, in some European markets, like the Netherlands, 5G spectrum auctions have just taken place and networks will not go online at some point in the future. 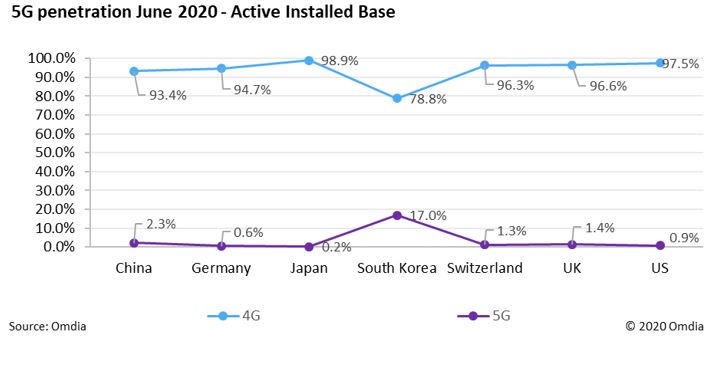 In China, carriers have actively signed up subscribers to 5G plans since last year – before networks and devices were available. The speed at which smartphone OEMs are driving 5G into more and more pricing segments is on full display in China. 5G-enabled phones at under $300 have already launched. After signing up subscribers to 5G plans last year, 2020 will be the year when these accounts move to 5G-enabled hardware.

While subscribers and OEMs are eager to embrace 5G, the Active Installed Base data shows that network access lags. With 2.3% of data in our June survey connecting via 5G, China is in distant second to Korea, but fares better than other early adopter countries. The Chinese smartphone market has shown signs of recovery after the country was in broad lockdown at the beginning of the year. With OEMs pushing the accelerator on bringing 5G to as many devices and price points as possible, China will be a clear leader in 5G handset shipments and utilization at the end of 2020.

Lastly, Japan’s 5G plans have been impacted by the pandemic. The Tokyo Olympics have been rescheduled until 2021, robbing the country of a key event which was scheduled to play a major role in driving 5G devices and services to the market. Instead, AIB 5G utilization for 5G stands at 0.2% for Japan in June of this year.

Our AIB data illustrates the disconnect between wireless carrier marketing, network roll out, device availability and network usage. While carriers have been pushing the next network generation for some time, roll out of these networks is not uniform and can lead to vastly different user experiences in countries. Smartphone OEMs and chip providers have pushed the inclusion of 5G connectivity to most price points already.

The question of which 5G use cases would be available to users to entice them to upgrade to a compatible phone has not been answered, but rather been replaced by 5G becoming an included feature, regardless of whether networks and services are available. OnePlus calls this future proofing their devices, in the case of the OnePlus Nord.

As the year progresses, 5G networks should start to play a bigger role in the everyday user experience of subscribers in China, Western Europe and North America. The COVID-19 pandemic will continue to impact the overall wireless landscape for the rest of the year and push network deployment further towards the end of this year and into next. Users with their 5G-enabled handsets will be there waiting to take advantage of the latest network.