COVID-19 has thus far had a limited impact on funding and acquisitions in the games space, as there has been no decline in the numbers of deals made through Q2.

COVID-19 has thus far had a limited impact on funding and acquisitions in the games space, as there has been no decline in the numbers of deals made through Q2. In the West, industry giants are continuing to build out games resources: Epic Games is now valued at $17 billion after a new funding round of $750 million, Playrix acquired Croatian studio Caetia, and UK Star Citizen developer Cloud Imperium obtained a further $300 million in funding – despite the game still lacking an official, commercial release. In China, however, we are seeing major games publishers shifting their focus away from games and towards AI and education sectors.

Investment into video streaming platforms has accelerated amongst prominent industry players. In April, Chinese video site Bilibili acquired $400 million in equity investment from Sony. The two companies aim to collaborate in broader entertainment fields in order to attract the elusive Gen Z demographic in China. Bilbili has been active in expanding its investment roadmap into the ACG sector, and Sony could also support the company in this regard given its long-term success with Fate/Grand Order via subsidiary Aniplex.

Bilibili also has a stake in esports. In December 2019, the entertainment platform signed a three-year contract worth 800 million yuan ($113 million) for exclusive local broadcast rights to the League of Legends World Championship. Pre-pandemic, the event was set to return to China in 2020 for the first time since 2017. League of Legends is the world’s most popular PC online game, with 8 million peak concurrent daily players in 2019. Omdia data shows that Chinese users represent two thirds of the global player-base, and therefore the core audience. 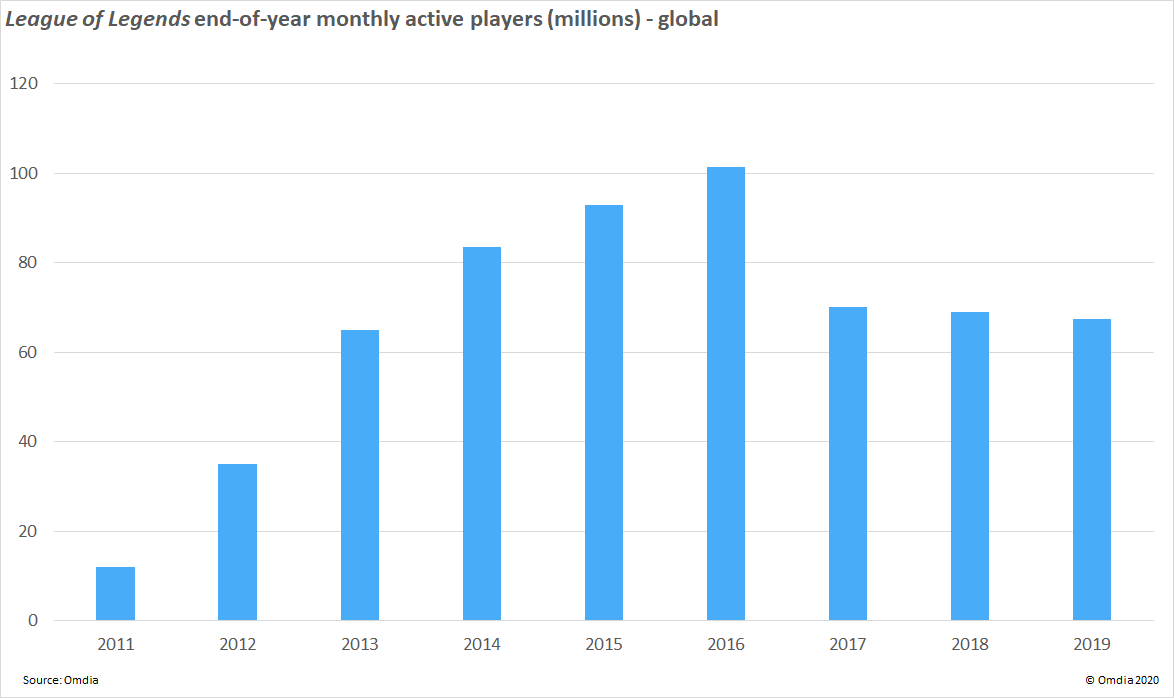 The world’s biggest games company, Tencent, has acquired the troubled Malaysian video streaming platform iflix, which operates across 13 Asian countries and reports over 10 million viewers. Founded in 2014, iflix gained traction in many emerging markets through delivering curated content in local languages. Despite this, the company has struggled to make a profit, recording sizable losses and multiple layoffs in recent years.

This acquisition will primarily enable Tencent to expand its influence and broaden its audience across Southeast Asia. It will leverage iflix’s content – including original shows – technology, and resources to fuel growth of its international streaming platform, WeTV. Tencent has also taken a controlling stake of streaming platform Huya, enhancing its already-dominant position in the domestic games live-streaming landscape.

Kuaishou is a popular video sharing app in China, and is second only to Douyin (China’s TikTok) with 170 million daily active users in 2020. The company has shown increasing interest in the games sector, investing in two mobile games developers in Q2 – Dmen Game, and WangPaiHuYu. Kuaishou likely hopes to compete more aggressively with TikTok creator ByteDance, who has already acquired a number of games studios and IPs, and now employs over 1,000 developers working on various projects. The diversification of revenue streams via games development and publishing will also help to provide longer-term stability.

HTML5 (or simply H5) games were popularised by WeChat’s Mini-Games feature back in 2017, and are essentially the web games of mobile. In Q2, Chinese company More See Technology received funding of $1.4 million to accelerate the development of H5 games for an ecommerce platform. The addition of mini games is intended to improve user retention and pay rate and, as a result, small developers in this area are starting to attract attention from investors.

Zynga is a successful mobile games publisher in its own right but has developed into one of the top-grossing companies through a series of acquisitions, including NaturalMotion (CSR Racing), Small Giant Games (Empires & Puzzles), and Gram Games (Merge Dragons!). In June, Zynga fully acquired Toon Blast developer Peak Games for $1.8 billion, expanding its roster of live service puzzle titles and increasing its international audience by more than 60%.

Intensifying its focus on Japan, Tencent purchased a stake in Japanese game studio Marvelous for $65 million, becoming the largest shareholder. Tencent Comic has regular partnerships with Japanese manga studios, including Shueisha and Sunrise, to launch popular manga and anime series in the Chinese market. However, Tencent’s ACG-based titles have thus far failed to generate significant user traction. Its IP-adapted mobile games Naruto Online and Fairy Tale could not make a dent in the highly competitive Chinese mobile games market. However, Marvelous’ current games portfolio has achieved great popularity and reputation among ACG fans. The two companies have already worked on the mobile adaptation of Story of Seasons, which is likely to be launched by the end of 2020.