LG launches new mid-range smartphone brand in the US

LG is refreshing its handset branding – starting with the Velvet 5G. The Velvet is not part of the V-series of devices, but it retains one of the unique hardware features of that flagship series: the dual-screen adapter case

LG launches new mid-range brand in the US

LG is refreshing its handset branding – starting with the Velvet 5G. The new device is not tagged with the ThinQ moniker found attached to recent LG smartphones. Reverting to a simple device allows LG to point back to successful LG devices popular at the start of the smartphone era. Importantly, LG is starting a re-branding campaign with a mid-range device, not a flagship.

The Velvet is not part of the V-series of devices, but it retains one of the unique hardware features of that flagship series: the dual-screen adapter case. Just like the last few V-series devices, the Velvet can be used with an optional case, adding another 6.8-inch screen.

While dual-screen capabilities are still key in the messaging surrounding the device, LG seems to take a slightly different approach with the Velvet, compared to the V60 ThinQ. There is no folder with pre-installed applications specifically designated as dual-screen apps. Developer support for LG’s dual screen does not seem to have increased over the last few months. Dual-screen support is an add on feature, because it is available and LG has spent resources on it, but it is not the focus of the device.

Stylus support on the Velvet should be an ideal way to showcase the device as a productivity tool, especially given the available extra real estate. LG, however, almost exclusively focuses on the changed hardware design and the continued support for advanced audio features (ASMR recording and voice bokeh).

After launching internationally, the phone is now set to reach US customers, starting with AT&T in July. T-Mobile and Verizon versions, including a Verizon specific version with mmWave 5G support, will follow later this year.

With a price starting at $599, LG is addressing a different market segment compared to its V-series of devices, which cost around $1,000 at launch. With this pricing LG meets the likes of Samsung and TCL in the price range around $500 for 5G-enabled devices for the US market. AT&T further lowers the price of the Velvet, at $10 per month for 30 months, to $300. While the dual-screen adapter is not bundled, AT&T will sell the case for $199. With the Velvet, LG stays competitive in this segment of the market in the US, across the mayor carriers. 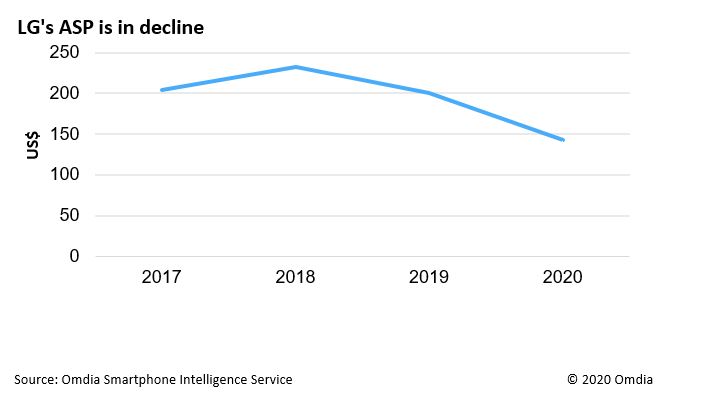 Opportunity in the US

LG shows good timing in launching the Velvet in the US this week. The OnePlus Nord, announced also this week, is not slated to come to the US. With the Velvet, LG is bringing a around-$500 5G smartphone to the major US carriers, giving them and subscribers another choice in this price segment. LG seems also quicker to market then the promised TCL 5G device, which will have a similar price point.

The Nord and Velvet devices are examples of the accelerating importance, and capabilities, of mid-range phones for smartphone OEMs. Driven by intense competition from OEMs like OPPO, vivo, Xiaomi, all targeting the price segment below the high-end and premium price segments, OEMs like Samsung and LG have, or need to, change their approach to the mid-range. Samsung did this with the Galaxy A-series. LG is now following suit.

Because OnePlus is not competing with its latest device for US carrier shelf space, and TCL’s device is not yet available, LG can better support this device without having to fear marketing campaigns could get lost in the noise of a busy marketplace. Even iPhone SE 2020 has been available for some time now.

As the fallout of the Coronavirus pandemic continues to unfold in the US, the economic impact continues into a second full quarter. LG has a device available now which can meet many existing and relatively new smartphone user needs. With the dual-screen case and stylus support, the Velvet can be an affordable new smartphone for buyers who now use their mobile devices in more work and educational settings.  LG should move on from focusing on the new design language and highlight productivity features in its marketing. The company should also approach, if it hasn’t already, companies which provide enterprise and educational tools and tie the marketing of the Velvet to those services.

The Galaxy Note remains the only real productivity tool with stylus support in the smartphone space. Previous LG devices with stylus did not have the same hardware performance to entice power users. With the Velvet, LG can stand out from the crowd if the company can quickly adjust to the situation on the ground and deliver a well-executed campaign to support the launch. If LG cannot take advantage of the current market situation in the US, it will be another example of the company not capitalizing on its mobile handset potential.

The US market is of great importance to LG’s mobile business. In Q1 2020 43% of LG’s total shipments, 2.3m units out of 5.4m total units, shipped to the US. It is also a market under severe pressure because of COVID-19. The company needs to take the chance at hand – to maintain its position in the US market and help soften the blow of a contracting smartphone market in 2020.