JD.com 6.18 again is using the month of June as a key sales driver for e-commerce. Just like in years’ past, June 18th is the date for the biggest sales promotions to go live. “JD.com 618” is another national online shopping besides "double 11,” which is held by Alibaba. From June 1st to 18th 2020, total orders for the JD.com 618 shopping festival reached about $38.4 billion USD, a new record again. The result shows continued growth for JD.com as a platform, but also show the overall recovery of China's consumer market after the first COVID-19 outbreak at the beginning of the year.

T-mall, one of other major players in Chinese e-commerce, also achieved good results during this shopping festival, with $97.7 billion USD of cumulative sales revenue of total merchandise turnover from June 1st to 18th June. Sales revenue from consumer electronics exceeded JD.com for the first time in this category.

Smartphones are still one of the favorite product categories during this shopping festival for JD.com and T-mall. Many brands introduced attractive promotional discounts. Apple participated in T-mall’s event officially for the first time. iPhone 11 series devices were discounted by around $21.4 USD via coupon. The iPhone 11 series prices dropped by as much as $260.8 USD. Buyers can also spread the purchase over 12 interest-free payments. Surprisingly iPhone SE2, which was released in the first half of the year, was also discounted. Apple officially announced a price cut of $28.5USD.  Although the iPhone is still selling all 4G models, iPhone's sales on every platform have grown a lot because of the massive price cuts. iPhone retains its brand appeal to Chinese consumers. According to the Omdia Smartphone Active Installed Base report, there is still a large proportion of users in China using old iPhones. Although the market share of iPhone has been declining in China, whenever iPhones receive discount promotions, sales increase in response. 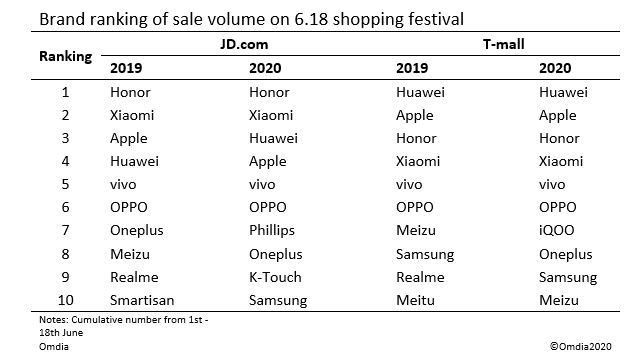 JD.com’s 618 event is an important indicator to show that the consumers have regained the confidence to spend money – leading to the smartphone market already recovering almost a normal mode of operation. 5G connectivity is the most important selling point for the Chinese market this year. The market will see a continuous reduction of prices for 5G smartphones, fueling the penetration rate of 5G in China in the second half of this year. 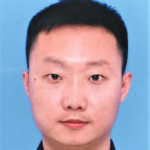