LG takes a different view of the multi-screen smartphone trend

LG’s Wing 5G smartphone takes a different approach to the multi-screen and foldable display form factor. The LG Wing has a front display that swivels.

LG takes a different view of the multi-screen smartphone trend

LG Mobile continues to take a different path towards multi-screen, or foldable screen, smartphones. The company has released recent devices, like the V60 ThinQ or Velvet, with optional cases which integrate a second screen.

Now the company is launching LG Wing, a 5G smartphone with display that can swivel to reveal a second screen underneath the main screen. With the phone, LG continues to position its handsets as creative tools for imaging and video recording. Had this strategy been subtly integrated into previous launch events, there is no doubt about LG’s aim with the launch of the LG Wing. The company used YouTube personalities to talk about the new phone and discuss its features.

In the US, the phone will reach the three main carriers, AT&T, T-Mobile and Verizon, later this year. Pricing has not yet been announced.

LG joins Motorola in looking to the past to inspire their latest smartphones. Motorola just launched its second version of the foldable razr. LG is looking to devices like the Motorola Flipout, Nokia N93i or LG’s Ally VS740, to inspire the first device coming out of its “Explorer Project” initiative.

LG has been looking for ways to stand out amongst the crowd of smartphone OEMs for some time. The company knows it is ill prepared to compete directly with Samsung and Apple in marketing budget. Chinese OEMs, like Huawei, OPPO, vivo and Xiaomi, have innovated at break-neck speed and while potentially sacrificing profitability. “Explorer Project” is to formalized result of this search to standout. The company is giving itself the license to seek out a different viewpoint to the smartphone form factor. The LG Wing is the first public showing of “Explorer Project.”

The Wing features a 6.8 inch FHD OLED screen with 20.5:9 aspect ratio. Under it and revealed by turning the larger display 90 degrees towards the top half of the phone, is a 3.9 inch OLED display. The top display can be rotated with one hand and stays in place once turned.

The focus of the device towards content creation, combined with its unique display layout, extends to the camera configuration of the device. Having a swivel main screen requires LG  to alter how to integrate the front facing camera. LG’s solution is a pop-up selfie camera, with 32 megapixel. On the rear, a triple lens camera is impacted by the front screen. One of the ultra-wide lenses on the back is turned 90 degrees to enable the correct view when the screen is swiveled to its swung-out position.

The camera capabilities and the additional screen are meant to enable users to shoot video with a gimbal-like interface – holding the phone with one hand and controlling video capture settings on the smaller display. The rotated screen, and offloading control icons to the second screen, declutters the main display for those looking to use their phone to produce elaborate videos. However, even non-professional users can benefit from these features.

Adding to the appeal is the fact that the LG Wing is powered by Qualcomm’s Snapdragon 765G processor. The processor indicates that LG will likely sell the device with an accessible price and not a premium flagship price of well over $1,000. A mid-range price, even at over $600, and the unique display will make the device an attractive option for many and should find support from salespeople. The Wing gives workers in a retail setting a device with wow-factor visuals, especially in the US where Apple and Samsung dominate.

LG’s smartphone business needs a high-profile win. The company saw shipments decline 24.3% year-over-year in Q2 2020, shipping 6.7 million units compared to 8.9 million units in Q2 2019. Additionally, LG has been unable to gain traction with its flagship devices over the last two years. The V-series also suffered from an awkward marketing tag, with LG’s ThinQ brand attached to the device name. Now, the company seems ready to minimize that branding and focus on a cleared naming system. The Wing follows the earlier Velvet.

The LG Q51 was the company’s best performing handset in Q2 2020, shipping 1.7 million units. The V60 ThinQ 5G shipped 0.5 million units. Omdia expects LG to ship around 25.4 million smartphones this year. A device like the Wing can have a halo effect and re-enter the LG brand into the mind of buyers who might otherwise be swayed by Chinese competition. Considering Huawei’s struggles, LG can use a device like the Wing to re-engage markets in Europe, where brand recognition remains strong and where quirky form factors have been available in the past. 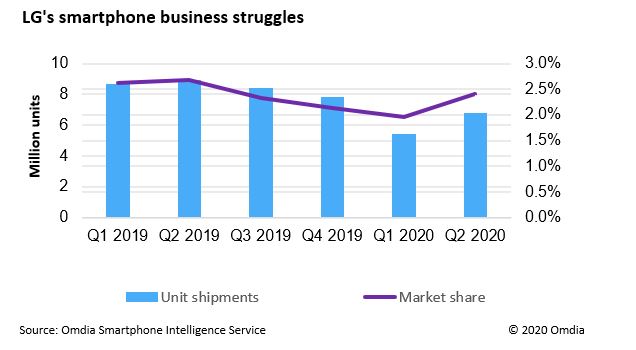 With the Wing, LG stands among Samsung and Motorola in releasing a new, unique, smartphone form factor. Even though the overall market is impacted by the global pandemic, smartphone OEMs can position themselves in a changing market landscape. Not only will the effects of the pandemic continue to linger, but Huawei’s position as market leader is now under significant threat. This opens opportunities for other OEMs to re-engage in markets they might have been pushed out of over recent times and reassert themselves as viable alternatives to Samsung. LG seems to realize this and is working on revitalizing its smartphone business by changing the branding of its devices and launching unique hardware options.