Motorola set for better traction with its second foldable razr

Analyst Opinion 10 Sep 2020 Gerrit Schneemann
Contents
Motorola hopes that 5G connectivity and updated design are enough for the razr to compete with Samsung in the foldable smartphone segment.

Motorola set for better traction with its second foldable razr

Motorola hoped the re-birth of the razr brand would facilitate its re-entry into the premium smartphone price segment. Instead, launch delays, a global pandemic and limited carrier reach conspired a meaningful launch of this high-end device. However, now the company is ready to launch the follow-up to the razr 2019.

Razr 2020 improves on some of the shortcomings of last year’s device. It also launches into a market where Samsung has released two versions of its own foldable flip phone, in addition to the larger Fold devices. And while the latest razr should immediately be more available to more potential buyers, the device, again, launches into markets dealing with a pandemic.

Multiple hardware aspects of the latest razr have been updated from the 2019 model. Chief among them is 5G connectivity. Where the 2019 version of the device was powered by a Qualcomm Snapdragon 710 chip, the latest version is powered by a Snapdragon 765 G processor. RAM and memory have also been upgraded to 8GB, from 6GB, of RAM and 256GB storage, from 128GB. The main display is still 6.2 inches. The upgraded connectivity and processing power capabilities on the razr allow it to compete a little bit better with its closest direct competitor: the Galaxy Z Flip 5G.

Motorola, again, makes it clear that the goal of the razr is to stick to the original form factor and design. This drive to retain the look and feel of the device forces hardware compromises. While the bottom lip now has a curve to make the phone more streamlined, the top portion still needs to be as thin as possible – preventing a multi-lens camera set up. The fingerprint scanner has moved to the back of the device, to improve usability and make the bottom lip less pronounced. The result of this change is that the razr does not support wireless charging.

The single rear camera lens is now 48 megapixels, up from the 16 megapixels included in the 2019 edition. The selfie camera has also been upgraded to 20 megapixels, instead of five megapixels on the previous model. Both are welcome updates as the camera performance on razr 2019 lagged other smartphones in the same price range and even lower priced devices. Motorola, across the product portfolio, has worked on camera performance realizing that the competition is delivering a differentiated user experience in photography.

A key enhancement to the user experience on the latest razr is the improved functionality of the external screen. Now, users can interact with applications like Google Maps, Spotify or Pandora, in a better way – based on the gesture controls of Android 10. The external screen also supports a full keyboard, making it easier to respond to messages or entering a term into Google Maps.

The enhanced external screen is a clear advantage over Samsung’s small external screen on the Flip series. On the Samsung device, swiping allows users to view notifications, but the screen is too small for meaningful interactions. Replicating the user interface of the internal screen as much as possible on the external screen brings familiarity to the smaller display. Users do not have to learn a new set of control functions for the smaller screen.

The Motorola razr launches with a price of $1399 – one hundred dollars cheaper than last year’s version. Even though the price is still premium, the device delivers now more for it. 5G connectivity and upgraded cameras, along with a better external display, are minimum requirements for a device in this price range. The Z Flip has a similar price tag but features a better processor. Motorola’s 2020 razr is a competitive product in this segment. Something that could not be said about the 2019 version.

Helping improve the razr’s competitiveness is the lack of carrier exclusivity this time around. The phone will be available on T-Mobile and AT&T along with online retailers like Amazon as well as Best Buy. Missing is Verizon but supporting this carrier would require mmWave 5G support on the phone.

Specific availability will vary, and Motorola is only committing to fall availability in the US. International availability should follow afterwards. If the device is not again hampered by availability delays, more users are likely to be interested in the device and will have a chance to acquiring one.

Foldables will remain niche form factor for some time

However, the importance for the device to Motorola will continue to lie in the halo effect the company is hoping to achieve.

Omdia anticipates foldable smartphone shipments to reach three million units in 2020, up from 0.3 million units in 2019. Further growth is anticipated for 2021 to reach nine million units. However, pricing for this form factor will remain relatively high and therefore limit the potential reach of foldables for the foreseeable future. Foldables will not cross the one percent penetration rate until 2021 as share of the overall smartphone market.

Because of this, devices like the razr are meant to break through the noise of traditional phone launches and showcase the capabilities of the OEM. Motorola has a chance to try again and do better. It is not the only company launching premium smartphones into this uncertain market, but the company was able to maintain momentum in the form factor and gain support from more carriers and retailers – both important improvements over earlier this year.

The success of the razr will hinge on Motorola’s ability to support the device with enough marketing to become established as an alternative to Samsung’s foldable products. 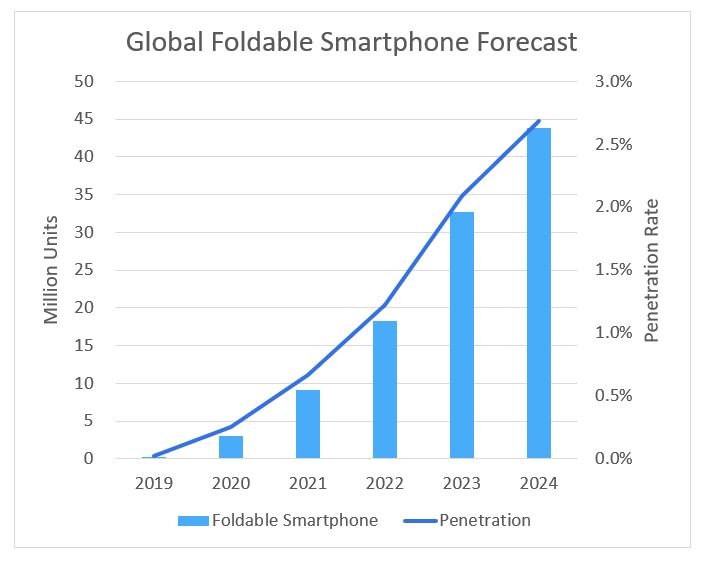