The Galaxy S21-series features a new design tying the camera array together across devices. The result is a more uniform look across all models. Samsung is also releasing the devices with several color options, instead of waiting to release new color variations later in the product lifecycle.

The key focus for smartphone OEMs remains camera technology, increased computational photography capabilities and advances in video capture. Samsung is no different in this regard.

Samsung was one of the first OEMs to support 8K video recording and the company is now utilizing this capability to create still images as well. The new 8K Snap feature lets users take pictures from 8K video they have previously captured.

Director’s View highlights the processing power of the phones. This feature lets users view multiple camera feeds at once, switch between them and zoom in and out of shots – without losing content.

On all three devices, Samsung is looking to improve the overall imaging capabilities of the phones, while at the same time adding new, enhanced features which speak to creators, like enhanced portrait modes, image stabilization, enhanced Single Take features and more manual settings.

Samsung is moving away from curved displays on two out of the three models. Only the Galaxy S21 Ultra retains an “edge” display, while the Galaxy S21 and S21+ flat displays with small cut-out for the front facing camera.

All models support adaptive refresh rates of 120Hz and as low as 10Hz on the Galaxy S21 Ultra. In a change to last year’s devices, users can take advantage of the high refresh rate at the highest supported resolution of the display on each model.

Connecting to other devices

The ongoing pandemic gives smartphone OEMs to illustrate use cases for their handsets as the hub to which other devices connect, or which can be interacted with via the phone.

Samsung is pushing ahead with its ecosystem play, spending a significant amount of time during the launch event showcasing how smartphones can be used in connection to other devices to improve the user experience in an app, like a fitness app (by connecting the phone to a TV and using the phone cameras to track movement in relation to the guidance of the instructor).

Samsung is also expanding the reach of its connected home platform to integrate with Google’s Nest and Android Auto – enabling users to control home devices from the SmartThings app and while in an Android Auto-equipped vehicle.

Showcasing user scenarios is helpful for the brand to showcase the range of applications and use cases new smartphones can support – even when old movement patterns have been altered, at least for the foreseeable future. This way, Samsung and other smartphone OEMs can create demand for upgrade sales as users adjust to a new normal, which can bring with it changes to what is now considered a required feature or capability.

Pressure on the Galaxy S-line

Samsung’s Galaxy S-line of flagship smartphones has been under pressure for the last few years. Annual shipments of the latest generation fell from 35.4 million units in 2018 (Galaxy S9 series) to 32.8 million units of the Galaxy S10 line in 2019. For the first three quarters of 2020, the Galaxy S20 line shipped just about 19 million units. Even a continued strong recovery in Q4 2020 is unlikely to see Samsung ship similar numbers to the other two product lines in the first year. Samsung volume is dominated by mid-range devices not in the S- or Note-lines. 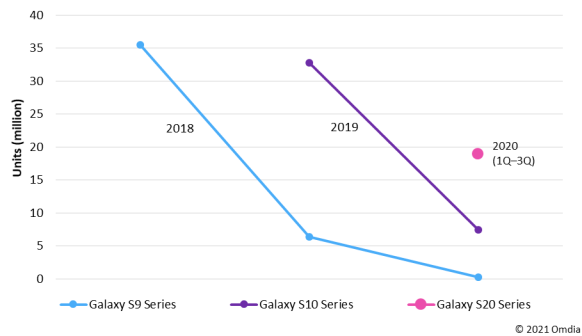 In addition to launching more models, Samsung also altered the positioning of the devices in the S-range. The Galaxy S10e, was aimed at the mid-range market and made several hardware compromises, like a smaller screen. Still, the entry price to the range rose from $720 in 2018 to $749 in 2019 and to $999.99 in 2020.

Samsung can adjust pricing for its mainstream flagship line of devices, because its foldable devices are now established as the premium devices of the portfolio. This allows Samsung to use the Galaxy S-line to upgrade users from A-series devices by having a less severe price gap between the two ranges.

In addition to trying to make the Galaxy S line more attractive to buyers by reversing the pricing trend, Samsung is also blurring between the S and Note lines. The Galaxy S21 Ultra will be the first S-line device to support Samsung’s S-Pen.

While other OEMs have dabbled with stylus support, either as accessories or in mid-range devices, Samsung’s Note series has been a unique flagship device range for years. Now, Samsung is shifting some of the productivity focus associated with the S-Pen to the S-line of devices.

Last year, the S and Note line converged with both Galaxy S20 Ultra and Note 20 Ultra featuring 6.9 inch displays. Expanding the functionality to another premium line of devices, with similar display real estate is a natural evolution - one that arguably should have happened sooner than it did.

By bringing the S-Pen to the S-line, Samsung is broadening the appeal of the S-line for productivity focused users and developers of productivity applications alike. Those who might not want to commit to a device geared completely to productivity, as the Note series has been, but one which can bridge the gap between work and personal use.

In a changing work and life environment, having the ability to use a physical pen to annotate on screen and sign documents while keeping consumer features, like camera capabilities, and a comfortable form factor for use away from work in one device presents an attractive solution to buyers in the premium segment.