Huawei has launched its latest super-premium foldable smartphone. With the Mate X2, Huawei is updating the design and hardware of the previous Mate models in a significant way: the new phone now has an in-folding display paired with a separate external display.

Huawei has launched its latest super-premium foldable smartphone. With the Mate X2, Huawei is updating the design and hardware of the previous Mate models in a significant way: the new phone now has an in-folding display paired with a separate external display.

With the Mate X2, Huawei is displaying hardware leadership but is launching the device while still under a technology ban from the US government and continuing smartphone shipment declines. Considering Huawei’s uncertain future in the global smartphone business, the biggest impact the Mate X2 will have on the market will be via inspiration that other OEMs gather in developing their own foldable handsets and what is possible with the form factor.

One of the most notable changes to the hardware of the Mate X2, compared to previous Huawei folding smartphones, is the in-folding main display and the addition of a second external display. So far, Huawei had focused on bending one display outward, eliminating the need for a second external display. The new display configuration resembles the approach Samsung has taken with its Galaxy Fold line of devices. The clear user benefit of this change lies in the added protection to the main display, as it is no longer constantly exposed.

One of the goals behind Huawei’s initial foldable design was to enable the device to be folded completely flat. Other foldable devices have also strived for this. Motorola’s new razr achieves this, while Samsung’s Flip and Fold feature a slight gap to allow for the display to fold correctly. On the new Mate X, Huawei achieved a flat folding phone by creating a mechanism which hides the teardrop curve of the display in the hinge.

The camera configuration integrated in the Mate X forced Huawei into changing the dimensions of the device. The side housing of the camera system is thicker than the other side without the camera. The thinner side measures 4.4mm unfolded, while the other side is 8.2mm thick, not including the camera bump.

There is only one “front” facing camera, integrated into the exterior display. There is no user facing camera on the internal screen. This choice will force users to utilize the exterior screen for video calls, instead of using the larger interior screen in connection with the multi-window and multi-tasking capabilities of the EMUI interface.

Huawei is charting a new course with its latest foldable smartphone when it comes to design. However, any discussion of the new device and comparison to other devices needs to happen in the context of Huawei’s difficult situation in the global smartphone market. Huawei’s shipments are expected to fall to around 41 million units in 2021, from 189.7 million units in 2020. The company will be forced to exit most international markets, as technology sanctions dry up component supplies. Huawei stated that the Mate X2 will launch in China, it seems unlikely that it will reach other markets even in limited numbers.

Furthermore, the previous Mate X device generations did not ship with significant volume. In 2019, Mate X shipped 44,000 units. In 2020, Mate Xs shipped 246,000 units. The Mate X2 is powered by the Kirin 9000 chip – the same processor also found in the Mate 40-series. It is unclear how Huawei will manage its component supply to support both product lines.

Lastly, Huawei indicates that the Mate X2 will be one of the first devices compatible with its own Harmony OS platform – from April of this year. A declining smartphone business will make it even harder for the company to generate developer support, especially outside of China. Even in China, developers can look to OEMs like OPPO, vivo, Xiaomi and others for an addressable market.

The Mate X2 launches as flagship device showcasing Huawei’s hardware capabilities into a difficult market for Huawei. The real impact of the device will be on the influence the technical developments Huawei has packed into it on other OEMs and their development plans for their respective foldable designs.

Early generations of foldable smartphones were priced well over $1,000. This will continue in the next few years as the new form factor smartphone will sit on the top of product line up. A total of 67 million smartphones, costing over $1,000, shipped in 2020. This is just 5% of total shipments in the year.

Apple dominates this market segment with 89% of market share in 2020. Recently, Apple’s dominance in the premium segment is getting stronger as the top two Android-based OEMs (Samsung and Huawei) are losing traction. However, there is no sign Apple releases a foldable iPhone soon. However, Apple has filed multiple patents related to foldable smartphones over the past years – an actual release is still unclear. Therefore, without Apple joining this new form factor, the global foldable market will be very limited.

Besides Huawei and Samsung, other Chinese OEMs also plan to release foldable smartphones this year. However, shipments will be very limited as Chinese OEMs are still known for cost performance rather than high-end in the international markets. 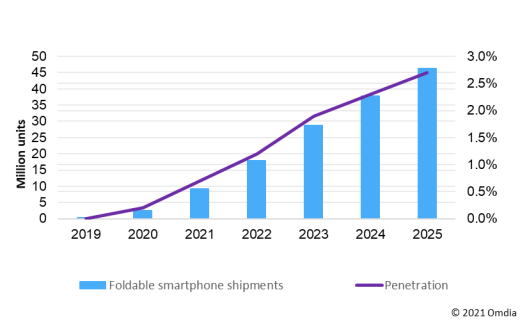 OMDIA forecasts that global foldable shipments will reach 9.1 million units in 2021. In addition, shipments will continue to grow and reach 46.2 million units by 2025. As more OEMs launch foldable smartphones, and the diversity of applications supporting the new form factor increases, the demand is expected to grow sharply afterwards. The penetration rate of foldable smartphones in total demand will hardly exceed more than 3% even in 2025 due to the high price point.

The forecast excludes iPhones as it is unclear when Apple will release using the new form factor. With Apple joining the trend, the addressable market for the foldable smartphone would be more than twice as big than the figure in the graph considering Apple’s dominance in the premium market. 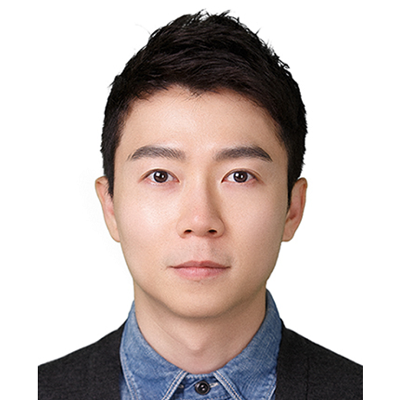