Intel’s new IDM 2.0 manufacturing strategy hinges on aggressive measures to bolster the company’s internal manufacturing capabilities. However, these efforts are unlikely to allow Intel to close the technology gap with leading-edge foundry TSMC within the next few years. To address its immediate process technology challenges, Intel is expanding its engagements with foundries, allowing its AI chipset products to remain competitive. At the same time, Intel is embracing the trend towards custom silicon, by dramatically increasing its contract foundry operations both in scale – the new foundry services line of business will be a launch customer for the new fabs—and in scope, by licensing much more Intel intellectual property to contract customers.

Intel’s IDM 2.0 strategy announcement this week made waves throughout the semiconductor world as the company outlined aggressive plans to return to the cutting edge of chip manufacturing process technology. News headlines focused on Intel’s designs for its own internal manufacturing operations, discussing the company’s intention to invest $20 billion in the construction of two new semiconductor fabs in Arizona. However, Intel’s upgrades to its internal manufacturing capabilities are unlikely to help the company address one of its most urgent near-term to mid-term challenges: the company’s lagging process technology that’s inhibiting the company’s progress in the AI chipset market. Other aspects of IDM 2.0—including the expanded use of third-party foundry capacity—could help Intel make up ground on the process technology front during the near to medium-term.

Intel in the past reliably remained at the leading edge of semiconductor manufacturing process technology, keeping pace with the world’s top foundries and memory chip manufacturers via the “tick-tock” strategy, where new process node sizes and microarchitecture versions were introduced in alternate years. However, over the past few years, Intel has seen its manufacturing leadership erode.

Leading foundry TSMC moved ahead of Intel in 2017 when it began manufacturing at the 7nm node, while Intel was just commencing production at 10nm, according to the Omdia Semiconductor Manufacturing and Supply and Pure Play Foundry Market Tracker reports. Despite that, most Intel product lines remained on 14nm, as the company encountered problems with the 10nm process. Intel is expected to tape-in the first7nm part this year—four years after TSMC began production—and to begin volume production with Meteor Lake, a desktop/laptop CPU planned for 2023.

TSMC’s manufacturing technology lead is therefore expected to persist, based on the current forecast, with the company moving to 3nm this year, while Intel will not commence production at 7nm for some time. Intel’s own manufacturing operations are not currently forecast to reach the 3nm level through the forecast period ending in in 2024, as presented in Figure 1.

Part of the problem is that Intel has spent significantly less on manufacturing than its rival. In the last four years, the percentage of Intel’s operating cashflow used for capex has fallen from 53% to 40%, while TSMC’s has increased from 57% to 78%. At this level, Intel is spending as much cash buying back its own stock as it invests.

With the impetus of the IDM 2.0 strategy, Intel could accelerate its process roadmap compared to the current outlook. Intel specifically mentioned its adoption of extreme ultraviolet lithography (EUV) technology to accelerate its process competitiveness. However, in light of the multi-year gap in process technology, Intel is unlikely to catch up to TSMC in the near term.

Figure 1: Comparison of most advanced semiconductor manufacturing processes for Intel and TSMC 2017–24

To address this challenge, Intel’s IDM 2.0 strategy also has a second prong, calling for the expanded use of third-party foundry capacity, including capacity provided by TSMC and possibly Samsung’s LSI division.

Intel AI chips such as the Habana and Mobileye chips are already being fabbed by external foundries. Mobileye’s vision-focused ASICs are fabbed at STMicroelectronics or TSMC depending on variant. There had been an intention to move them to the Atom x86 platform, but this has now been put off indefinitely. The Habana AI training and inference processors have always been fabbed by TSMC.  However, this activity could expand into manufacturing the company’s leadership computing cores, with media reports indicating that Intel plans to manufacture its CPUs using TSMC’s 3nm process technology in 2022, possibly in parallel with in-house product. For Intel, the increased use of foundries’ advanced processes will allow the company to move rapidly to the cutting edge of chip manufacturing, without having to wait to complete the development of its next process technology.

This represents a “quick win” strategy intended to get leading products up to speed on key benchmarks. However, fabrication is both a volume business, and a process business. As such, learning-by-doing is crucial. TSMC and Samsung have achieved their technology lead by operating at very high scale, a consequence of their role as suppliers to the mobile market, by far the biggest semiconductor market by volume. Getting the new fabs working at full capacity will be essential both from a financial point of view—in order to utilize the $20bn investment—and from a technical point of view, to master the new process.

The third prong of Intel’s IDM 2.0—building a world-class foundry business—envisions the company becoming a major supplier of foundry capacity in the US and Europe. This is one way to ensure the fabs are fully utilized. To begin with, this will happen indirectly—Intel says the 22nm process will be the first available for customizers, so custom work will backfill older facilities as new products move to the latest plants.

This is not the first time Intel has offered contract foundry services. This time, however, along with manufacturing capacity, Intel will offer its IP portfolio to customers—including its coveted x86 cores. This would allow customers to develop their own, custom chips combining key pieces of Intel IP. At the same time, Intel’s own technology is moving towards a model based on integrating “tiles” or “chiplets” into bigger dies, essentially systems-on-chips. Custom implementers can now design their own x86 cores and use Intel IP for adjacent technology such as I/O or RF, or integrate Intel cores into SoCs including their own technology for applications such as deep learning hardware acceleration.

Custom silicon is rapidly growing in importance across the industry—Apple has moved its MacBooks to a custom, ARM-based SoC, Amazon Web Services is making increasing use of its own in-house Graviton 2 CPUs and its Trainium and Inferentia AI ASICs both for its own services and for customer workloads, and Google has recently announced that it is developing custom server SoCs. AI is a key driver here – half the processor cores in the Apple M1 SoC are devoted to the Neural Engine AI ASIC, AWS runs the Alexa virtual assistant on Inferentia, and the centrality of machine learning to Google’s software is well known.

It’s also worth understanding that, at the edge and in mobile, AI workloads are usually accelerated using either custom ASICs or repurposed digital signal processors (DSPs) rather than GPUs. As a result, Omdia forecasts that revenue from GPU cores in these markets will peak in 2022–23 as the ASICs take over more market share.

The trend towards ASIC solutions for AI started in mobile and at the edge, as Figure 2 shows, but as the developments at AWS and Google show, it is spreading into the data center and the cloud. The custom parts from Apple, AWS, and Google all share a common heritage in that they are built on ARM’s technology. This represents a major strategic threat to Intel, as the Data Center Group’s server chips account for a third of its revenue and 45% of its operating income. 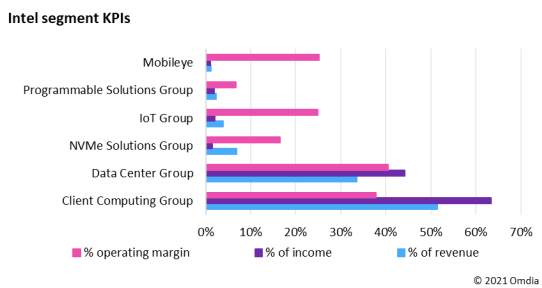 For Intel, the custom silicon strategy promises to open up a new, fast-growing line of business in AI chips, outside of the company’s traditional standard product lines, while offering a strategy to defend the data center franchise and a means of keeping the fabs fully utilized.

Intel gets on the road to recovery

The IDM 2.0 strategy puts Intel on a trajectory to mitigate its process technology challenges, turning to foundries for immediate assistance and then advancing its own manufacturing capabilities over the long term. Intel seems to be making the right moves to ensure it has the required manufacturing technology to remain competitive in AI chips. Financially, the $20bn investment over two years is enough to bring Intel’s CAPEX within $1bn of TSMC’s current level. Shareholders may have to be patient, as additional investment on this scale represents a significant cut (between a quarter and a half, depending on how fast Intel phases it in) to annual buybacks. However, if Intel is to thrive in the long run, either fixing fabrication or getting out of it entirely is non-negotiable.

Alexander is a Senior Analyst for Enterprise AI and member of the artificial intelligence analyst team. He covers the emerging enterprise applications of AI and machine learning, with a special focus on business models and AI as an IT service, as well as on the core technology of AI.

Since joining Omdia in 2016, Alexander has covered technologies for small and medium enterprises, with a specific focus on mobile and 5G for enterprises. In previous roles, he developed the Enterprise 5G Innovations Tracker to monitor the emerging enterprise 5G and CBRS ecosystem. He was the second employee of start-up consulting firm STL Partners. With over 10 years of experience as a technology sector analyst, his long-term research interests include mobile, open source, distributed computing, and the two-sided business model. Alexander holds an MSc in international relations from Royal Holloway, University of London.