The smart speaker revolution is coming to an end in North America as sales numbers plateau, but growth elsewhere in the world suggests that the revolution lives on outside North America

The smart speaker revolution is coming to an end in North America as sales numbers plateau, but growth elsewhere in the world suggests that the revolution lives on outside North America, and new use cases in areas like healthcare offer the promise of a second life for the devices, according to new research from Omdia.

According to Omdia’s latest smart speaker report, the compound annual growth rate (CAGR) for smart speaker annual shipments in North America is forecast to be just 1.3% for 2021 to 2026, compared to the strong 118% CAGR that the market experienced from 2014 to 2021 (see Figure 1).

In fact, annual speaker shipments for Amazon have a forecast CAGR from 2021 to 2026 of -3.2% in North America, and Google will not fare much better in the market at 0.2%. Meanwhile, Apple is forecast to be one of the strongest brands from 2021 to 2026, with a CAGR of 11.7%, although this projected growth is predicated on the release of a new smart speaker; otherwise, Apple’s growth is expected to be flat, according to the report, part of Omdia’s Smart Home Intelligence Service.

“Smart speakers have become ubiquitous in the US. In fact, the price point of many smart speakers today means price is not the barrier to further adoption,” said Blake Kozak, senior principal analyst for smart homes at Omdia. “If a consumer wants a smart speaker, obtaining one should not be a problem assuming a broadband connection is present.”

Kozak said that reaching this saturation point is largely due to Amazon, which in 2021 had an estimated installed base of 110 million speakers across North America, nearly double the installed base of Google. Since many households already have multiple smart speakers, Omdia believes consumers are starting to pull back. “In addition, since smart speakers do not need to be replaced unless they fail, growth is about to come to a grinding stop in the North American market,” Kozak added.

Despite the leveling off in the smart speaker market in North America, the Omdia report points to more favorable growth prospects for the devices elsewhere in the world. The global smart speaker market was worth about $13bn in 2021, up from about $12.1bn in 2020. In terms of unit shipments, there were an estimated 190 million smart speakers shipped globally in 2021, forecast to reach 273 million annual shipments in 2026, or a CAGR of 7.5%.

China’s importance for the market is notable. Omdia data show that the leading three smart speaker brands in China—Alibaba, Baidu, and Xiaomi—combined to represent 52% of global smart speaker shipments in 2021.

Kozak said that because the use case will be narrow, natural language understanding (NLU) could be improved beyond general use smart speakers. Plus, there could be more opportunities for federated learning with a narrower use case. In fact, Sonos announced its voice assistant will become available in June 2022, with a dedicated assistant that only controls speakers and works without the cloud.

Overall smart speakers are evolving past basic use cases such as playing music or weather forecasts. Later this year and in 2023, consumers can expect broader opportunities for smart speakers, especially as part of an omnichannel approach to healthcare services, according to Omdia.

Chatbots and SMS are already part of healthcare providers’ strategy, and smart speakers are another modality to provide services. For example, transcription could be part of the healthcare services, with a patient talking to a smart speaker about how they are feeling. That conversation would need to be accurately transcribed to be added to a health record.

In short, Kozak said, there is a macro trend in healthcare to provider services outside of the traditional clinical environment, which is providing a strong tailwind for devices in the home and potentially other businesses for smart speakers and IoT devices.

“The smart speaker era is coming to an end, but the usefulness of these devices can be prolonged with the introduction of new use cases like healthcare,” Kozak said. “Although the smart speaker itself will soon begin to fade, voice assistant technology will continue to play a significant role in smart homes. But instead of residing mostly in speakers, the technology will find its way into other devices in the home and will be blended with enterprise use cases.” 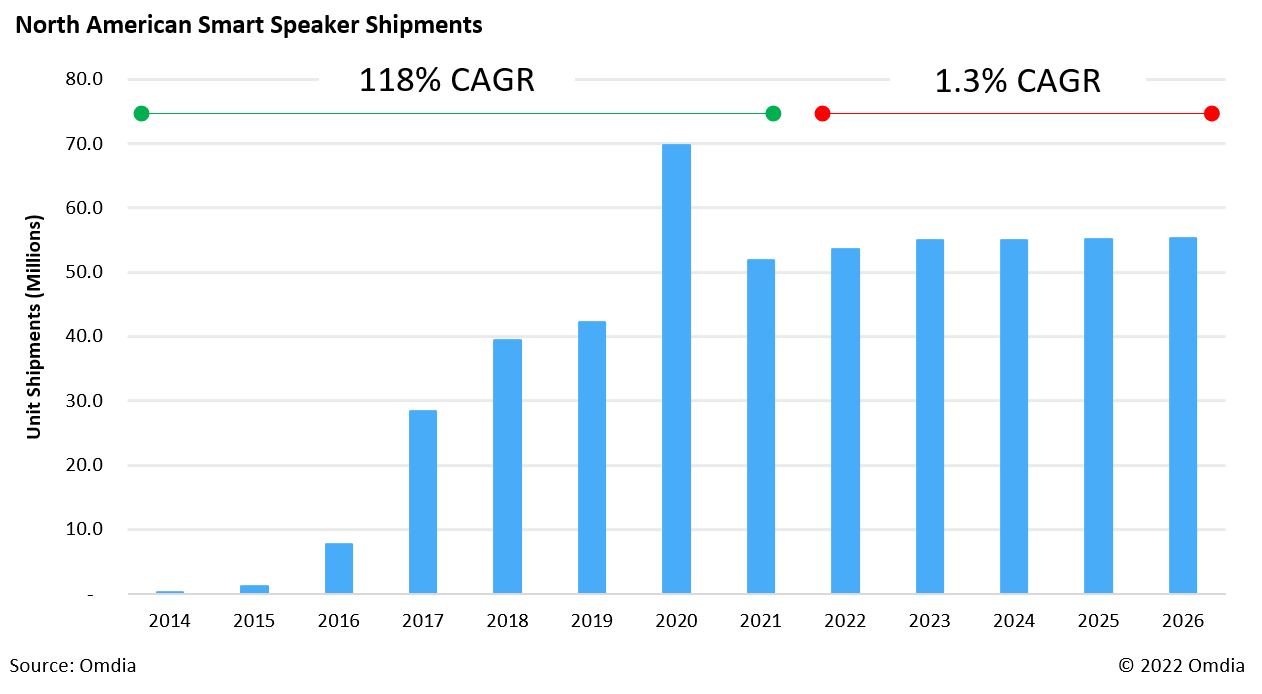 Blake Kozak discusses Trends to Watch in Consumer Security Cameras for 2022 in this new video.