Quad-Camera is the most popular camera setup for smartphones

London, 1 December 2020: Smartphones with Quad Cameras have accounted for the largest portion of total smartphone sales in Q3’20 according to Omdia’s latest smartphone model market tracker.

Smartphones with triple cameras fell to second place for the first time since it took the first place in fourth quarter of 2019. 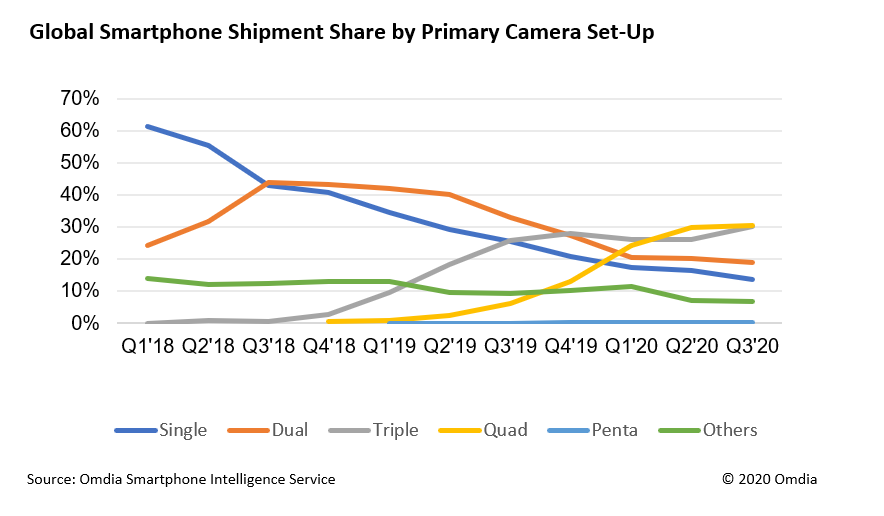 Since the release of Dual Camera, the number of smartphone lenses has been increasing rapidly. Dual cameras surpassed single cameras for the first time in the third quarter of 2018. After five quarters later, triple cameras overtook the position from Dual Camera.

The advantage of multi-camera is that it upgrades the camera feature by providing such as bokeh effect, wide angle and zoom. In the past, smartphone cameras were a competition to increase the number of pixels, but recently, the competition move to the number of camera lenses. 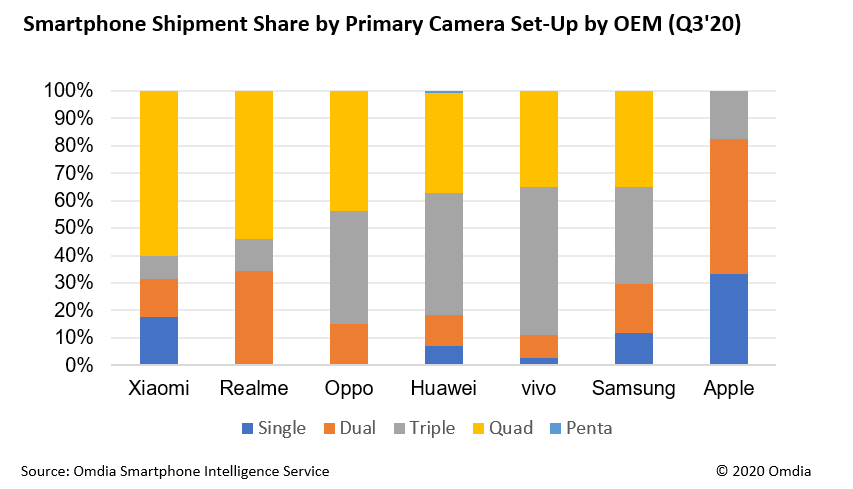 Chinese OEMs are more aggressive on multi-cameras. Among the top seven global OEMs, Xiaomi has the highest penetration of quad cameras. Quad camera accounts for 60% of the total smartphone shipments in the third quarter. During the same period, the proportions of Dual and Triple were 14% and 8%, respectively. Realme, a low-cost smartphone brand separated from Oppo, also reported that the proportion of quad cameras accounted for more than half. Realme shipped all smartphones with multi-cameras without smartphones with single cameras in the third quarter.

Other Chinese OEMs, Oppo, Vivo, and Huawei also showed a high share of Multi cameras. Quad camera accounted for 44% of Oppo’s smartphone shipments, while it was triple camera that has highest share in Huawei and vivo.

Samsung, which has the world's No. 1 smartphone market share, is also expanding the adoption of multi-cameras for mid- to low-end models. The shares of Quad and Triple camera were the same at 35% of total shipments.

On the other hand, Apple still ships half of iPhones with dual camera and only 17% of them with triple camera. However, Apple's multi-camera share is expected to increase significantly in the fourth quarter as the newly released iPhone 12 series adopts dual cameras for low-end and quad cameras for pro models.

We combine the expertise of more than 400 analysts across the entire technology spectrum covering 150 markets and publish over 3,000 research reports annually, reaching over 14,000 subscribers, and covering thousands of technology, media, and telecommunications companies.

Our exhaustive intelligence and deep technology expertise allow us to uncover actionable insights that help our customers connect the dots in today’s constantly evolving technology environment and empower them to improve their businesses – today and tomorrow.

Omdia is a registered trademark of Informa PLC and/or its affiliates. All other company and product names may be trademarks of their respective owners. Informa PLC registered in England & Wales with number 8860726, registered office and head office 5 Howick Place, London, SW1P 1WG, UK. Copyright © 2020 Omdia. All rights reserved.

The majority of IHS Markit technology research products and solutions were acquired by Informa in August 2019 and are now part of Omdia.