Within the realm of smartphone electronics design, the emergence of 5G RF front-end complications are presenting a new set of challenges. The demands for multiple 5G frequencies, TDD and FDD flavors and even multiple millimeter wave antenna modules within the finite space of the humble smartphone form-factor has pushed the industry to look for a solution to tame that complexity.

Within the realm of smartphone electronics design, the emergence of 5G RF front-end complications are presenting a new set of challenges.  The demands for multiple 5G frequencies, TDD and FDD flavors and even multiple millimeter wave antenna modules within the finite space of the humble smartphone form-factor has pushed the industry to look for a solution to tame that complexity.

One of the major technologies applied in 5G designs focus not so much on the base silicon as it does on the advancements in packaging and component densification.  Here, we will take a look at a representative 2nd generation 5G smartphone to observe how heavily the RF components industry has lean on advanced packaging and component integration for 5G RFFE. 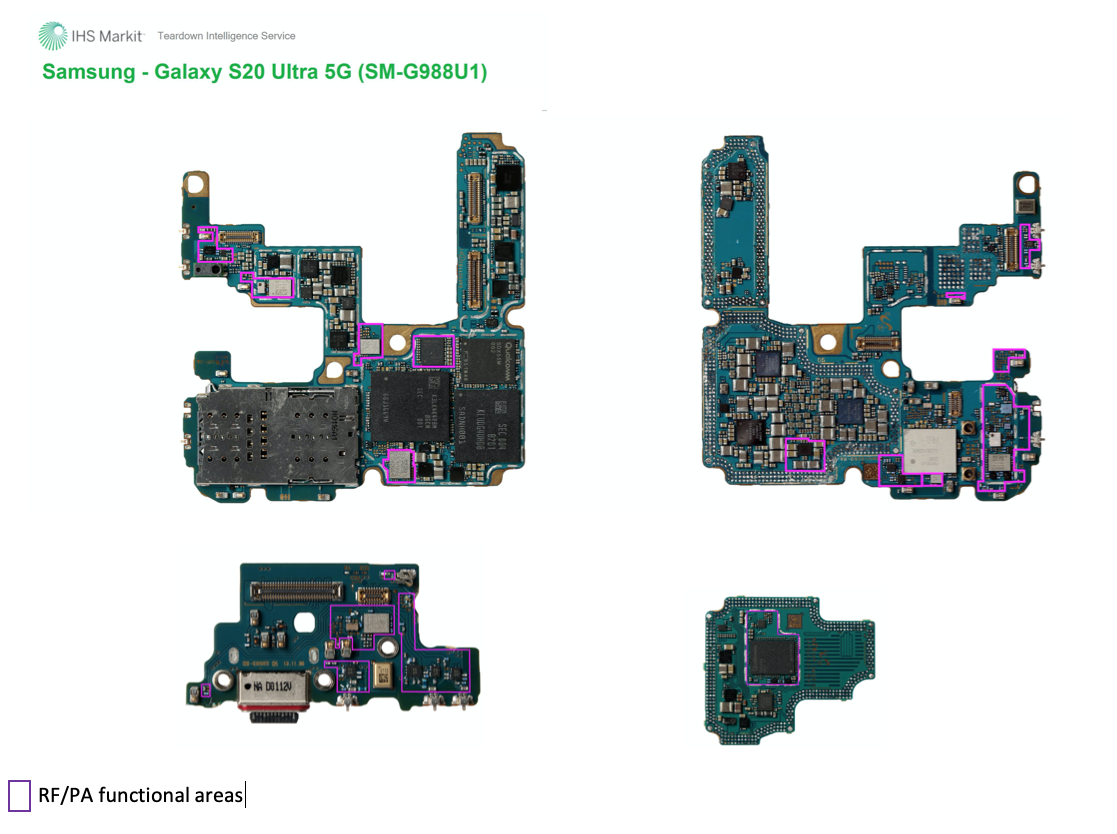 The Samsung Galaxy S20 series represent the latest and most complex 5G RF front end design.  Not only does the RF support legacy 2G/3G/4G but also multiple sub-6 GHz and mmWave 5G.  The illustration listed above show just how prevalent RF componentry are with location diversity which touches just about every major PCB within the device.

Drilling down into the major RFFE components after the modem and RF transceiver, the integrated power amplifier module demonstrates the extent of the RF densification and complexity of a late 5G design.  Here, the Qualcomm X55 modem opens up FDD 5G support as global carriers deploys 5G on a larger scale with the necessary signal coverage afforded by low band frequencies.  The low band PAMiD (power amplifier module with integrated duplexers) are essential for the Galaxy S20 in 5G but also this particular Skyworks PAMiD does double-duty as the LTE PAMiD.  By adding low band support for n71/n5/n26 (5G), the Skyworks PAMiD packs in nearly every conceivable low-band combination. The benefit of low-band 5G RF is that the bandwidths are nearly identical to that of LTE therefore low band frequency support leverage common components to support both 5G and LTE standards – not to mention the handful of global roaming low-band support.

The below x-ray and chemical de-capsulation photos highlight the various 5G/4G RF components required to support low-band connectivity; antenna switches, filters (SAW), duplexers (for FDD) and power amp (uplink).  As a consequence of advance packaging and shrinking silicon processes, the Skyworks PAMiD now supports many more low band frequencies than in a similar size package in the past.  This level of progress is the key to controlling the run-away complexity of 5G RFFE if the design were left discrete, creating many points of failure.  The modularization of RFFE is key to the next generation of wireless technology. 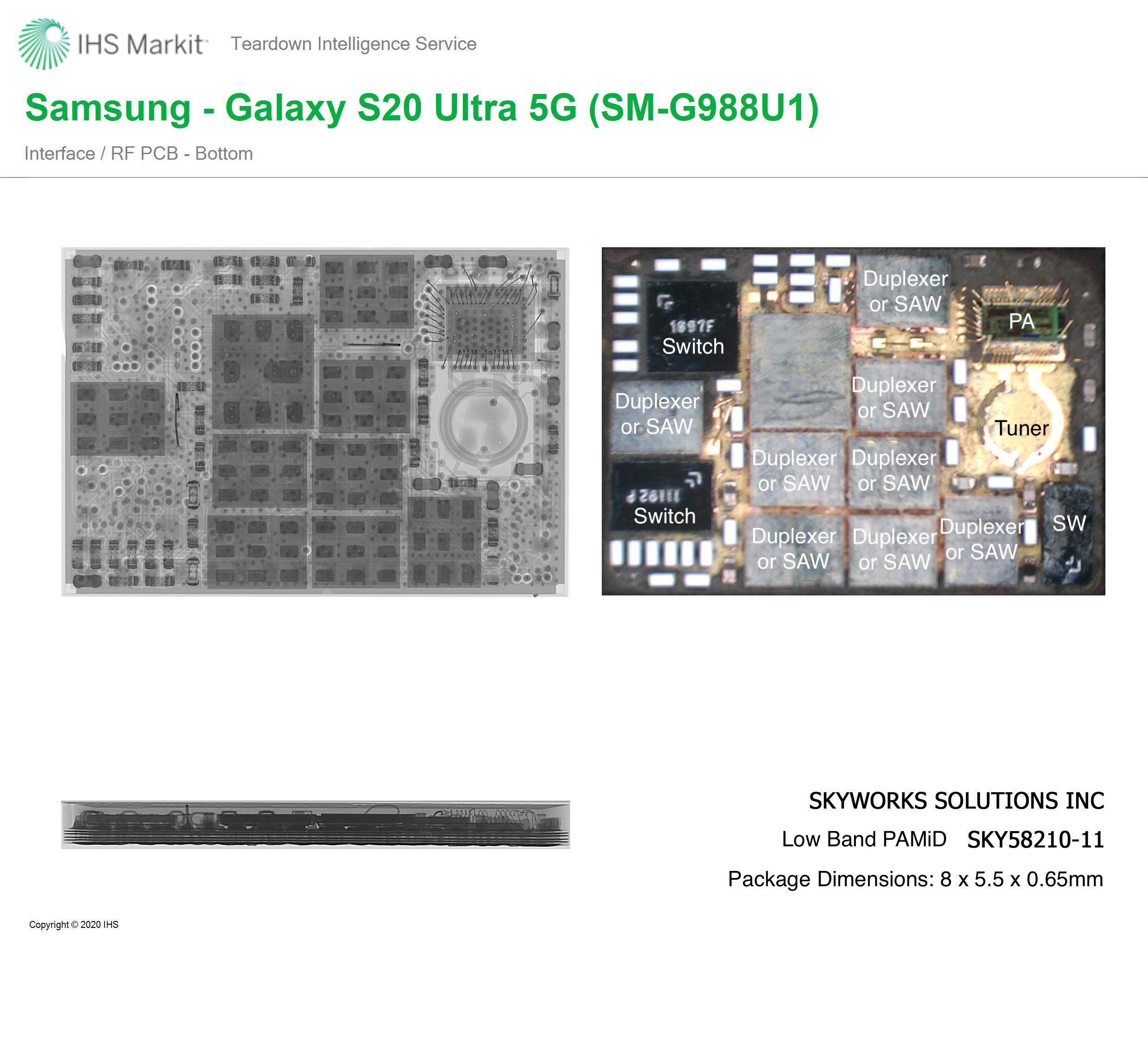 Additionally, PAMiDs for mid to high band LTE is critical in 5G design to modularize the LTE section.  Since most 5G deployments are NSA based, it is crucial that an anchor LTE signal be present.  The following mid to high band PAMiD from Qorvo was also discovered within the Samsung Galaxy S20. 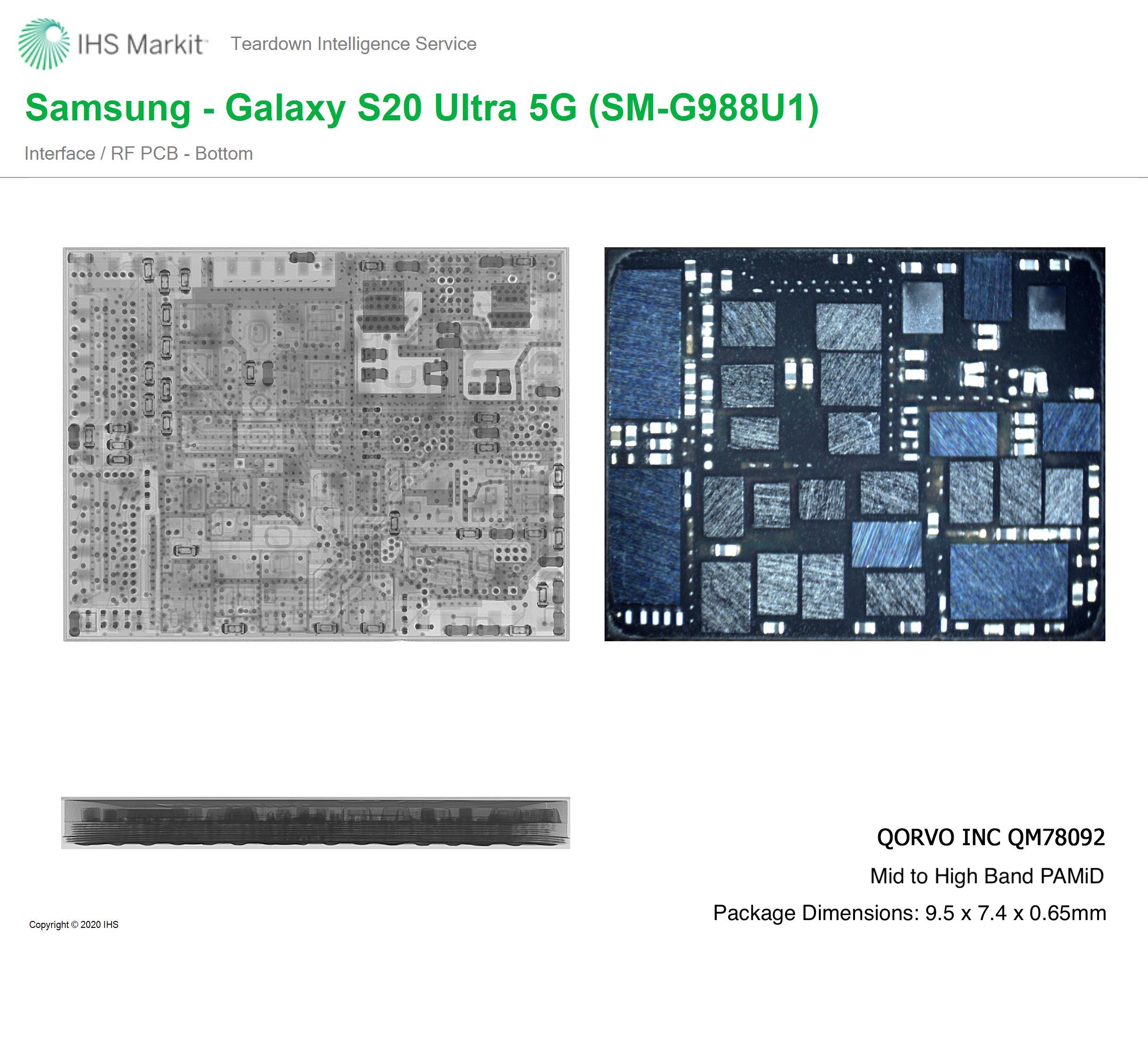 The true benefits of 5G is ultimately realized at higher and higher frequencies.  Here, we have the Qualcomm QPM6585 PAMiF (power amplifier module with integrated filters) for TDD band n41 (2.5GHz) found within the Galaxy S20.  Band n41 supports the North American market and really considered “mid-to-high band” frequency.  Most of the global 5G deployments are at the ultra-high band (UHB) frequency of n78 (3.5GHz).  Separate PAMiFs are required due to the significantly larger bandwidth coverage offered by 5G. 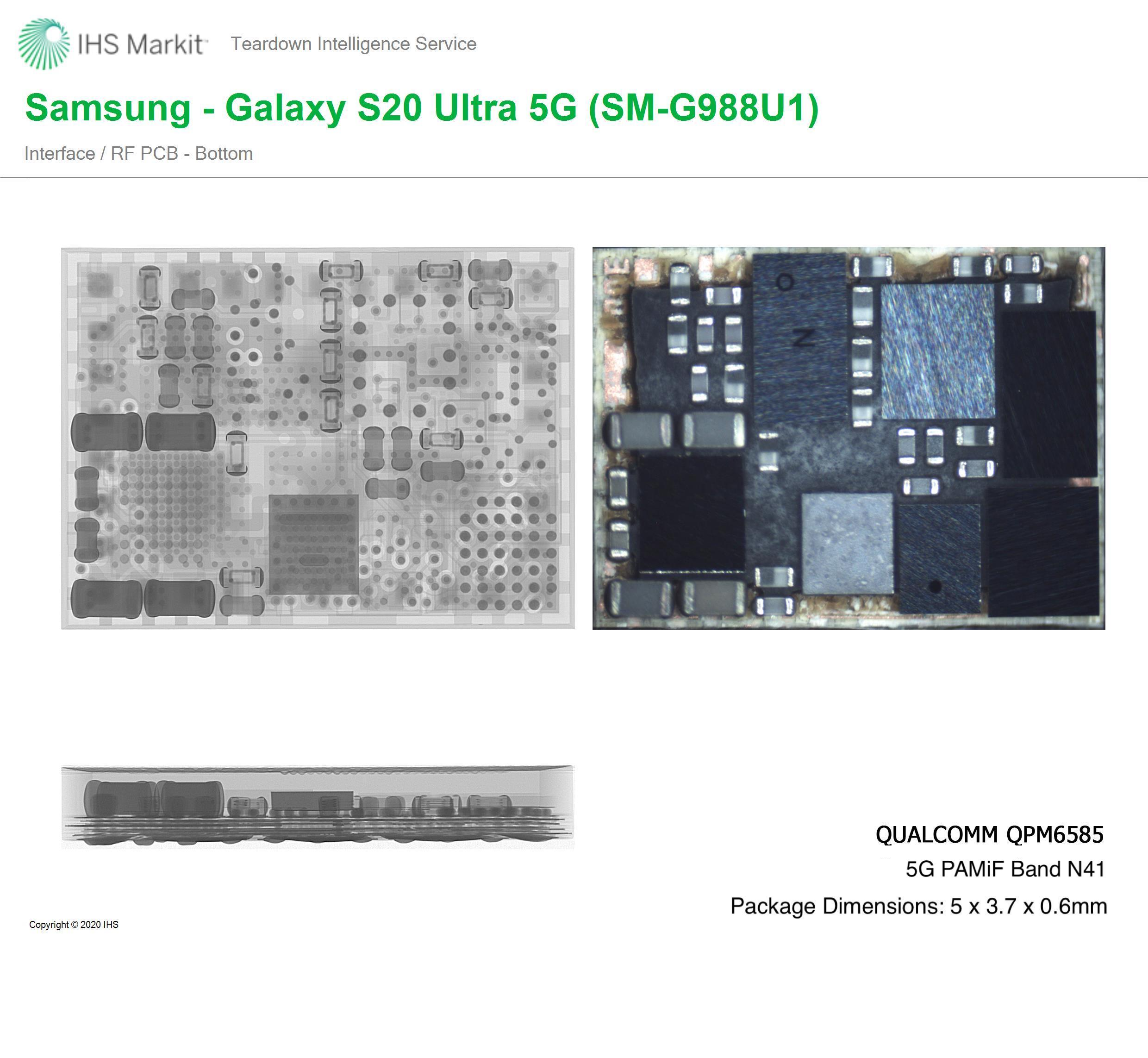 So far, we’ve looked at Sub-6GHz 5G/4G RFFE components.  As 5G matures, it is expected that millimeter wave frequencies (24GHz and higher) will be needed to continue to address the growing demand for wireless broadband and capacity.   The 2nd generation Samsung Galaxy S20 Ultra 5G smartphone includes mmWave antenna modules in addition to the Sub-6 GHz RFFE.  mmWave antenna modules are, compared to Sub-6 GHz RFFE, the ultimate in RFFE system integration.  The Qualcomm QTM525 antenna modules within the Samsung contains everything from a phased-array antenna all the way to the RF transceiver.  The reason for this high level of integration has to do with the nature of mmWave attenuation.  So to capture these very faint signals, the entire mmWave RFFE chain has to be shorten to ensure signal integrality within the link budget of the connection.

5G is well into its 2nd year of evolution.  For device makers, there is no other functional area within the 5G devices that is growing in complexity than the RFFE.  The RF FE component industry has been preparing for this eventuality and by leaning heavily on advanced packaging technologies, OEMs can continue to add more and more wireless connectivity support into the same smartphone form factor demanded by the market.