This report discusses the launch of Facebook gaming; it is primarily designed for streaming and watching live gameplay, and it's focus is on casual and mobile games. It is currently ad-free to focus on building an audience.

On Monday 20th April, Facebook launched its Facebook Gaming mobile app on the Google Play Store. The app is primarily designed for streaming and watching live gameplay. It is initially only available on Android devices via Google Play Store, but Facebook has plans to release the app for iOS after acquiring approval from Apple. The app was originally set to launch in June, but mass-quarantine efforts attempting to halt the spread of COVID-19 have triggered record-breaking consumer engagement with games across multiple platforms. In an attempt to capitalise on this, the launch was accelerated.

The Facebook Gaming app is a somewhat unique proposition in that the focus is on casual and mobile games. Twitch, the leading platform for games live streaming, is heavily weighted towards desktop PC gaming. On the other hand, YouTube has established a growing community of mobile games streamers and spectators: Tencent’s PUBG Mobile, Garena’s Free Fire and the Supercell titles Clash of Clans, Brawl Stars and Clash Royale frequently rank amongst the most-viewed games. 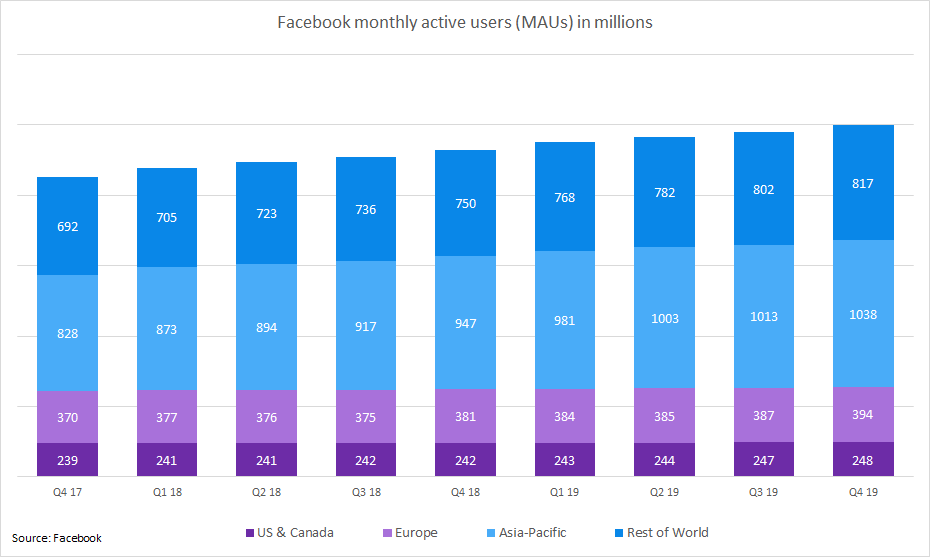 Emerging games markets in APAC and LATAM are fuelling YouTube viewership, and Facebook will need to tap into these audiences effectively in order to grow its gaming app. Facebook data shows that this is entirely plausible: in Q4, 41.6% of Facebook’s monthly active users (MAUs) were based in the Asia-Pacific region – that’s a huge majority of the audience, with the next largest being Europe at just 15.8%. APAC has also demonstrated the highest growth in MAUs; a 25.4% increase since Q4 2017. What’s more, many small businesses in APAC and also LATAM use social media for business development and online commerce, somewhat broadening the demographic. However, despite the growth of online video consumption in APAC, there are still barriers, such as lack of bandwidth and limited internet connectivity in some areas.

Over 98% of Facebook’s revenue currently comes from advertising and although North America represented only 9.9% of MAUs in Q4 2019, it was responsible for almost half of revenue – 48.6%. 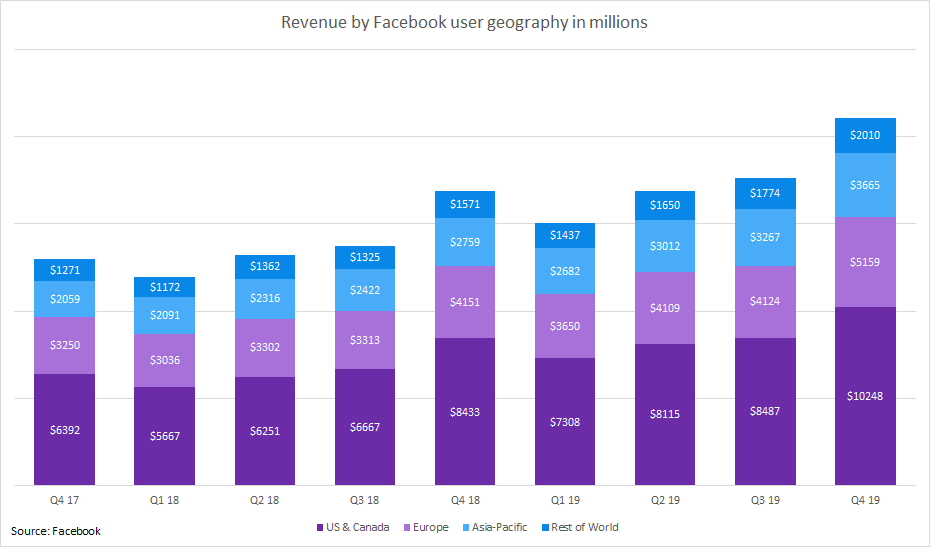 As such, Facebook may need to focus on growing its North American user-base to maximise profit, or consider alternative forms of monetisation that will better-appeal to users in Asia-Pacific and emerging territories such as Latin America.

The app does not yet include any ads, and will instead monetise through the use of Facebook “Stars” – a feature akin to Twitch “bits” - which users can purchase to use in chat and cheer on their favourite streamer. Facebook will take a commission from these sales, and has said it will add other forms of monetisation further down the line. Its closest competitors have ads, and while the no-ad proposition may help in terms of initial consumer uptake, it may also limit monetisation potential for streamers. The future addition of advertising is almost certain; it is needed in order to remain competitive in the space, and to attract enough high-quality content creators.

Facebook can leverage its unparalleled social network capabilities, but can it democratize game streaming?

The company aims to minimise user friction by simplifying the process of launching a stream. Using the “Go Live” function, users can quickly and seamlessly upload streams of mobile games not directly included within the new app. These streams can then be shared to the user’s personal Facebook page – engaging their broader community of family and friends. This may allow a coveted level of initial exposure for amateur streamers. However, this kind of exposure may be unwelcome for many gamers – especially players of core titles – who would consider their Facebook friends an unwanted or unsuitable audience, and one that is separate to their gaming community. Console gaming, for example, does provide a social aspect, but one that has always been exclusively games-driven. Facebook is first and foremost a social network.

This is possibly an attempt to make games streaming more mainstream and better-recognised amongst “non-gamers”.  The focus is on casual games, which represents a relatively untapped segment and subsequent demographic. The difficulty lies in enticing casual players into the world of streaming, and re-framing it as a democratized event which blurs the lines of social groups, rather than an arena exclusively for young and highly-skilled gamers.

In December last year, Facebook acquired the Spanish cloud gaming company PlayGiga. Leveraging PlayGiga’s existing capabilities provides Facebook with a shortcut to market, as a cloud gaming service would not have to be built from scratch. In terms of active users, North America represents Facebook’s smallest audience, and so PlayGiga’s focus on Europe and Latin America supports Facebook’s strategy for further growth in these markets.

Facebook is likely to integrate any cloud gaming service into its streaming platform, much like Google is planning to with Stadia and YouTube, offering spectators instant access to content they are viewing. The question remains as to the shape such a cloud gaming service might take. Facebook has no background in AAA games, but PlayGiga has an existing library of premium titles from over 60 publishers which could surely be leveraged.

There is also the possibility that Facebook will adopt a different approach and provide an innovative alternative to other cloud gaming services that are on the market or in the pipeline, such as those from Google, Sony, Microsoft and Amazon. Facebook’s expertise in browser-based and instant games could form the foundation of a casual cloud games service, but consumer demand for this type of offering is questionable. Many of the benefits of cloud gaming, such as playing high-quality content on low-spec hardware or instant access to games which typically take a long time to download and update, are not wholly applicable to casual mobile titles. Frictionless access to games is still a strong selling point, but that friction is heavily reduced on mobile versus PC and console platforms. On the other hand, a casual service would certainly monetise better through ads than a premium one.

There is also the matter of VR. Facebook acquired Oculus in 2014, Beat Games (of Beat Saber fame) and VR developer Sanzaru Games in 2019, and is spearheading standalone VR experiences with the Oculus Quest. Combining both VR and social networking, Facebook announced the social VR world Facebook Horizon last year, with a beta version launching in 2020. In this world, users can play games, build communities or simply hang out. What’s more, PlayGiga has previously collaborated with tech giants such as Intel in order to research 5G performance for streaming VR games – suggesting that a VR-centric cloud gaming service is a real possibility.