Industrial connectivity in the era of TSN, APL and 5G

Connectivity is one of the fundamental pillars upon which the industrial IoT (IIoT) is built. And over the last few decades, industrial connectivity in particular has evolved considerably, especially in response to the ever-changing requirements of the manufacturing industry.

Connectivity is one of the fundamental pillars upon which the industrial IoT (IIoT) is built. And over the last few decades, industrial connectivity, in particular, has evolved considerably, especially in response to the ever-changing requirements of the manufacturing industry.

Following the advent of discrete wires to communicate with field devices, the Fieldbus industrial networking technology came into play, introducing the concept of a controller to communicate with field devices. A rival technology, Ethernet, became a household name in the early 1990s and then found gradual adoption by industry starting in the early 2000s.

In many industrial networks today, Ethernet is deployed along with Fieldbus and wireless technologies. Those mechanisms continue to evolve even with the arrival in the industrial manufacturing world of much newer technologies, such as 5G, Time-Sensitive Networking (TSN), and Advanced Physical Layer (APL).

The new technologies form part of a comprehensive examination of the industrial connectivity landscape covered by my recently published study, Industrial Communications Report – 2019, with full content now available to subscribers.

Industrial connectivity through the years

The number of connected nodes being shipped every year continues to increase, Informa Tech estimates. Not only are more devices able to connect to a network, but the number of nodes is also on the rise. The market for connected nodes in industrial communications approached 125 million units in 2018 and is forecast to grow to more than 224 million in 2023. The shift to Ethernet has accelerated as Industry 4.0 and IIoT solutions are maturing and becoming more prevalent, with Ethernet seen as the industrial networking technology enabling the solutions. Overall, the number of Ethernet-connected nodes will more than double from 50 million units to 110 million by 2023, translating into a compound annual growth rate (CAGR) of 17.1% for the Ethernet market during the five-year period, IHS Markit | Technology is forecasting.

For Fieldbus, growth will be steady for the same period with a 6.8% CAGR; Fieldbus-connected nodes are forecast to grow from 55.0 million to 77.3 million. Even so, Ethernet technologies will outpace Fieldbus technologies on new connected nodes by 2020.

PROFIBUS remains the leading Fieldbus protocol at a 22% market share of the Fieldbus market, but IO-Link is the fastest-growing, with many sensors using IO-Link for Fieldbus.

Wireless use in industrial networks, meanwhile, will grow at a healthy CAGR of 11.4% during the same 2018-23 period, from 1.6 million connected nodes to 2.8 million. The two leading wireless protocols are WLAN and WirelessHART. Together with cellular, these two mechanisms account for 61% of the total wireless protocol market. 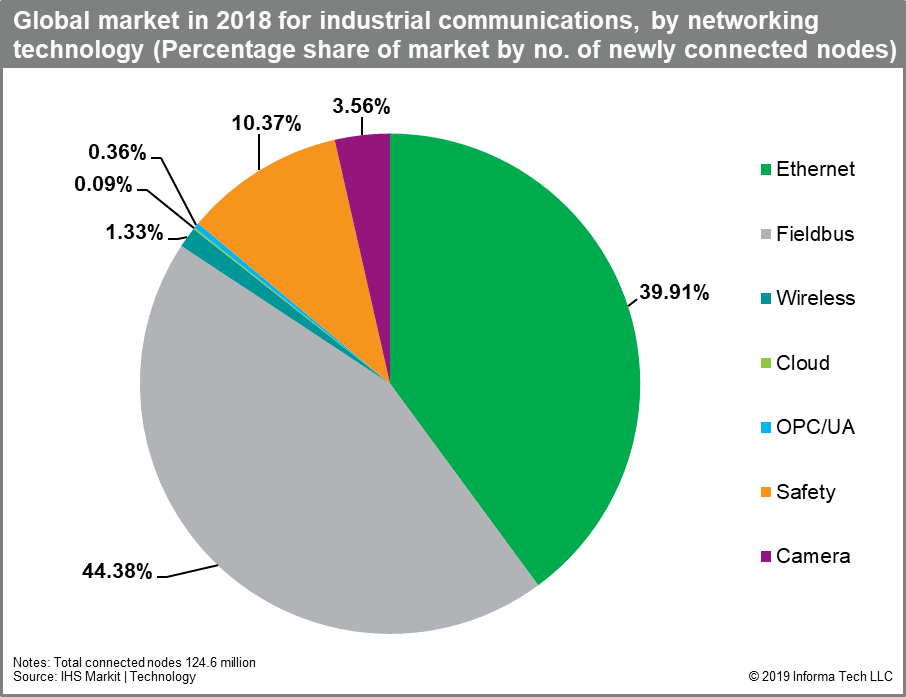 TSN: a step toward the convergence of industrial networks

Time-Sensitive Networking (TSN) is a set of IEEE 802 Ethernet sub-standards, defined by the IEEE TSN Task Group that enables deterministic real-time communication. With TSN demos already occurring in tradeshows, the standard is in the specification phase with a hoped-for release scheduled in late 2019 or early 2020.

To be sure, this year has been important in the development of TSN specifications. Mitsubishi Electric first announced compatibility with CC-Link IE TSN of 102 automation products—including programmable logic controllers (PLCs), servos, robots, HMIs, inverters, and computer numerical controls (CNCs)—beginning in May 2019.

Another milestone this year was the release in July 2019 of the TSN specification for PROFINET by PROFINET User Organization (PNO).  So far, there has been no product announcement from Siemens—an advocate of PROFINET--about products supporting the TSN version of PROFINET, but Siemens and other companies are ostensibly waiting for the standardization committee to publish IEEE 802.1AS-Rev that would then allow Siemens to make such an announcement.

Aside from real-time data transmission capabilities, TSN enables Ethernet-based protocols to run differently on the same network, thus solving a critical issue faced by industrial users. However, it will likely take some time before any substantial adoption of TSN occurs because the devices must first be produced in scale, among other reasons. 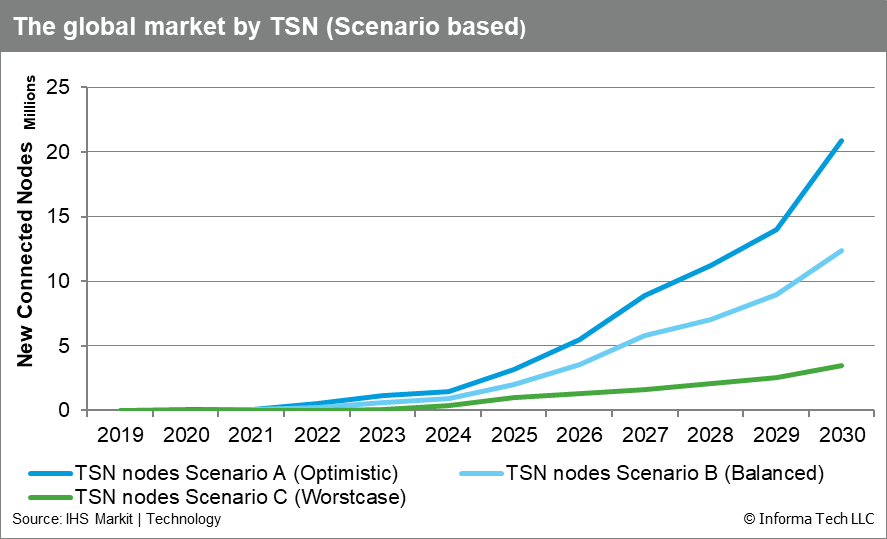