With Pixel 6, Google takes a significant step as a smartphone OEM

Contents
Google has launched its latest Pixel smartphones. With Pixel 6 and Pixel 6 Pro, Google is entering a new era of its smartphone business. The new devices are the first to feature Google’s Tensor processor.

Google has launched its latest Pixel smartphones. With Pixel 6 and Pixel 6 Pro, Google is entering a new era of its smartphone business. The new devices are the first to feature Google’s Tensor processor instead of relying on chips provided by a third party like Qualcomm. Both phones also catch up to the flagship competition in camera hardware and premium material finishes. Pixel 6 and 6 Pro highlight Google’s ambitions in the smartphone space to grow market share on the back of its complete stack of software and hardware.

Google rationalizes the development of its processor with the desire to bring its AI research and capabilities to its handsets—something, the company claims, not entirely possible while relying on third-party processors. Magic Eraser and Motion Mode in Google Photos are two new functions that showcase Google’s latest photography enhancements. With Magic Eraser, users can remove persons and objects after the fact. With Motion Mode, users can simulate an action pan or long exposure effect on their images.

One of the exciting strategy changes necessitated by the introduction of Google’s processor will be how Google will handle Pixel as a showcase for Android features versus an Android device that Google differentiates from all competition. There should be more Pixel-exclusive features in the future, showing Tensor’s capabilities and distinguishing from iOS and other Android OEMs. On-device voice recognition and processing are key differentiators, but not high-profile ones. Some of the camera features—motion blur and long exposure—lend themselves to highlight the power of the Google chip. It just must be communicated. Google will also have to make the difference between exclusive and “first” clear in its marketing. The need for exclusive features versus the need to drive the Android platform will create some friction within Google, but having an aligned vision should allow each part of this equation to thrive going forward.

This year, Google paired the launch of Pixel 6 with a focus on device and user security. Google has been focused on this segment of the smartphone experience for some time, last year focusing on enterprise security requirements. Google is increasing hardware security on the new devices and further enhancing user-facing features, like call screening and suspect activity warnings throughout the interface.

The focus on security works well with increasing user awareness around online attacks on user data. Google can also push security-related features into the forefront of the user experience and is not hiding advanced features deep in settings menus.

Google is broadening the ASP segment range. Compared to last year’s Pixel 5, which cost approximately $699 at launch, Google is lowering the entry-level price for its latest Pixel generation to $599. At the same time, however, the better-equipped Pro model gets a significant price bump to $899 and tops out at $1,099 for the model with 512GB storage. 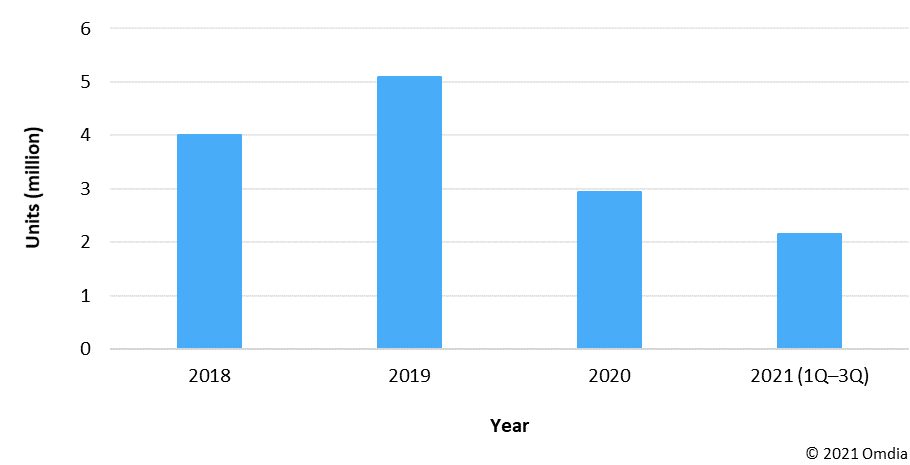 A broader target audience will help Google grow shipments to 3.1 million units this year, up from 2.9 million in 2020. While this year’s shipments help stop Google’s slide in unit volume, the new product portfolio sets the stage for more extensive growth next year to an anticipated 4.3 million units.

While the overall hardware design is the same for the Pixel 6 and 6 Pro, key hardware differences exist between the two models. The Pro model not only has a larger 6.7-inch LTPO OLED display compared to the 6.4-inch OLED on the Pixel 6, but it also supports a higher refresh rate, up to 120Hz, compared to the 90Hz supported on the non-Pro model. A larger battery on the Pro model is no surprise, as the body is more considerable.

The design of the camera bar on the back of the Pixel 6’s is a standout feature that sets these two devices apart from most other camera bump designs, which are either square or round. Even though the Pixel 6 Pro has more lenses in its camera bar than the standard Pixel 6, having the same design across both devices establishes a unique design language. One that should be used for at least a few device generations to come.

The bar points to one of the most significant changes in the Pixel hardware, along with the Google processor—the camera hardware has been updated. With the 6 Pro, a 4x optical zoom telephoto lens adds much-needed feature parity with other flagship devices. Google is not winning any races to the highest megapixel count, but that is unnecessary, as other OEMs have proven. The combination of camera hardware and software capabilities is more critical to the user experience than a raw megapixel count. Google has proven it can deliver impressive images without the latest camera hardware. An upgrade in this department only helps.

Google’s Pixel 6 series is a much-needed refresh of the Pixel line of smartphones. With the new design, and more importantly, the commitment to its processor, Google is showing that the smartphone form factor remains a vital hardware business for the company.

The new devices are updated in critical user experience areas, like security and camera. However, they show the first-generation nature of the new Tensor chip. In practice, some of the camera features seemed not to work as well as intended. In other cases, helpful calling interfaces did not appear all the time. Frequent software updates should solve many of the existing issues.

For Google, the challenge now is to develop a Pixel-exclusive set of features while at the same time not slowing the development of the greater Android ecosystem. The company currently has a broad range of devices. For many price segments and user profiles, it must follow up the positive launch of the Pixel 6 with active support to reach users in key markets who have been exposed to a decreasing number of smartphone options over the years. The existence of Tensor implies that Google will support its handsets with the necessary marketing. The Pixel 6-series presents a unique combination of features and design that should find a receptive audience.