What a global recession would mean for telcos

Many economists and other financial experts are predicting an impending global downturn driven by high inflation and raised interest rates. This article discusses the potential impact on global telecoms revenue and market competition.

Omdia forecasts total telecoms revenue, which includes mobile and fixed broadband services, to grow from $1.1tn in 2021 to $1.3tn in 2027 at a CAGR of 2.2%. However, many economists and other financial experts are predicting an impending global downturn driven by high inflation and raised interest rates. The last global recession occurred over 13 years ago, between 2007 and 2009, and gives little insight into the effects of a downturn on the telecoms industry. This article discusses the potential impact on global telecoms revenue and market competition.

The telecoms world in the last global recession was nothing like it is today. In 2007, mobile population penetration had just passed 50% and the first iPhone had only just launched—the App Store followed a year later. Broadband household penetration was 20%, DVD sales were peaking, and YouTube was only two years old.

A more recent and relevant analysis would be to look at the European sovereign debt crisis in 2010–12, during which several European countries defaulted and EU GDP growth turned negative (see Figure 1). Mobile services revenue was significantly down during that timeframe and declined 10% in 2013. But this wasn’t all due to the economy. Lower international roaming charges and an overall reduction in traditional mobile voice and messaging revenue due to competition from the mobile app market also had a big impact. Outside Europe, data during the Brazilian financial crisis in 2015–16 also shows a negative impact on mobile revenue, but to a lesser extent (-2.1% year-on-year [YoY] in 2016).

It is, therefore, difficult to say with a high level of confidence what the impact would be of a recession on today’s telecoms market based on historical data. Mobile and broadband have now become essential utility services, and this dependency will bring some resilience to the telecoms market during a potential financial crisis.

However, the industry will not remain unscathed. Consumers and businesses will be more likely to change service providers and/or tariffs to reduce spend. For example, people will look to save money by shifting to lower tariffs, sacrificing their mobile data allowance, and using Wi-Fi instead. An acceleration of ARPU decline in mobile should be expected, especially in markets where customers are predominantly on prepaid and monthly rolling tariffs. 5G adoption and network rollout will most probably slow down as operator 5G revenue models will be undermined, in part because consumers will be reluctant to buy new 5G handsets. Some operators may slow 5G investment in favor of fiber network buildout.

The fixed broadband market is likely to be more resilient, and ARPU should remain stable but won’t grow at the same level as it did in 2021. In periods of economic downturn, people tend to stay home more, therefore spending more time using their broadband services, as we’ve seen during the COVID-19 outbreak. For example, pay-TV revenue in the US grew steadily throughout the Great Recession of 2007–09. The transition to fiber is likely to continue at the same pace if investments in network buildout do not dry up. Also, it is likely there will be some market consolidation in countries and regions where there is an oversupply of fiber services, such as the UK and Germany.

A recession will accelerate the erosion of legacy business connectivity

On the B2B side, it is likely that we will see some market contraction across the world as businesses cut operating costs, lay off employees, or just end operations all together. Several 5G private and public network projects, especially in manufacturing and transportation, will be put on hold as budgets get cut and productivity goes down.

Some businesses may move back to remote working to reduce costs, hindering corporate-liable broadband growth and further exacerbating the erosion of MPLS and other private WAN services. Service providers without services beyond connectivity, such as security, managed cloud, private networks, and customer/employee experience, will suffer disproportionately. However, possessing such capabilities will not guarantee success, as businesses will revisit existing contracts and change requirements and budget expectations as they face a tougher economic climate.

Increased activity in terms of asset divestiture and outsourcing should also be expected. It will create opportunities for prospective technology services buyers to acquire companies on the cheap, scale up capabilities, and win new contracts; take, for example, Vodafone’s mooted sale of its IoT arm. For buyers, taking an aggressive approach during an economic downturn can pay off in the long run, but the cash to fund it will be difficult to obtain.

Developing markets are at particular risk

Developing markets are suffering from inflation already, to a larger extent than mature markets. The rise in fuel prices has brought the gig economy in Africa to a standstill. A global recession, if it happens, will have a severe impact on developing economies. It will also negatively affect the global telecoms market, as those regions are key growth drivers. For example, Central and Southern Asia, Latin America & the Caribbean, Middle East & Africa, and Eastern Europe accounted for a third of net new revenue growth for fixed broadband in the past year (see Figure 2). Fixed mobile substitution will become more prominent and stall fixed broadband growth. Developing markets are also more reactive to a financial crisis, as customers aren’t locked into long-term contracts.

Mature markets will be less impacted because growth is not as high and any change in revenue will not be so sudden. Online and mobile internet services are already well established and used regularly by customers who have learned to heavily rely on them throughout COVID-19. Competition is likely to intensify, as we have seen in the US, where operators such as T-Mobile are using the rise in inflation rates to differentiate their offers. Customers will be more responsive to price reduction and long-term fixed-price guarantees. 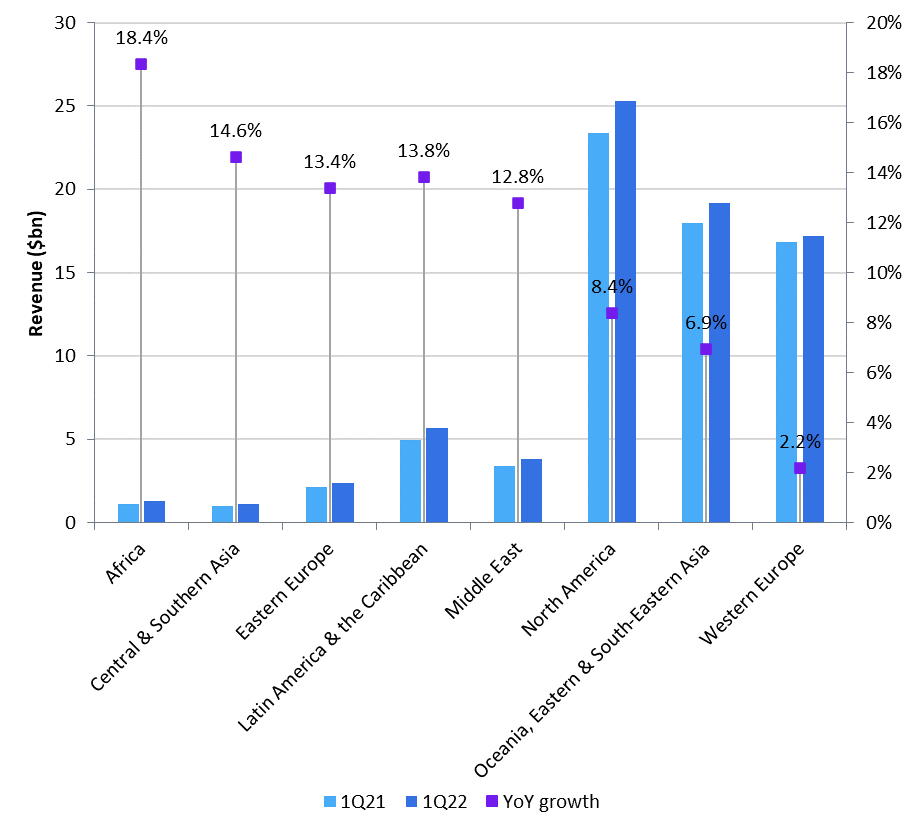 It is time to rethink the telecoms business model

Disruptive innovation often occurs in challenging times. There are some strong indicators that the telecoms industry is about to change, and a global recession may accelerate this.

Growing inflation and interest rates will undoubtedly push operators to reduce costs, and finding operational efficiencies couldn’t be more important. Cloud-based network architecture and technologies such as open RAN promise to help operators be more flexible and run the network more efficiently. However, this will mostly benefit greenfield operators such as DISH, 1&1 Drillisch, and Rakuten Mobile that are free from legacy infrastructure. Financial pressure is also likely to accelerate digital transformation further, and operators that have already made good progress with their transformation will have a competitive edge. On the fixed side, the energy-cost benefits of all-fiber networks should help maintain ongoing investment in FTTH network deployments.

An eventual recession may create opportunities for a new breed of MNOs to emerge, which will be almost entirely reliant on cloud-based technologies. Reduced barriers to entry and strong support from hyperscalers such as Amazon, Google, and Microsoft Azure are likely to accelerate open RAN deployments. Everyone will be watching how open RAN pioneers perform in a recessionary environment and whether the gains they can achieve in terms of operating costs will translate to tougher competition and lower prices for customers. 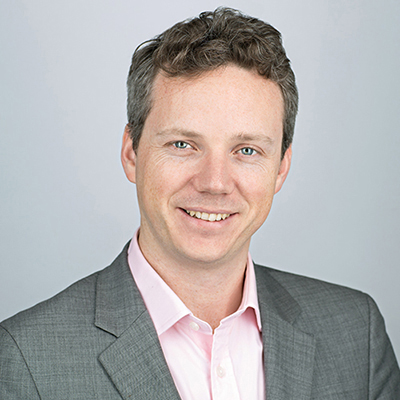 Ronan oversees Service Provider Markets and leads a team of over 20 international analysts that are responsible for the coverage of global, regional, and local service provider markets. He has been analyzing the TMT industry for more than 15 years, covering a wide range of domains in telecoms, media, and devices.

Ronan now owns and oversees the creation of high-quality syndicated research deliverables, ranging from Omdia’s core “W” data products to key trackers, regional outlooks, and trends to watch. Prior to joining Informa (now Omdia), formerly Ovum, in 2014, he was a principal analyst at Analysys Mason and IHS Screen Digest. Ronan is prized as a global technology commentator and often discusses a range of issues with Bloomberg, CNBC, Sky, and BBC. Ronan holds a PhD in telecommunications from King's College London.

This regional outlook report reviews the state of the telecom market in Europe, and looks ahead at its prospects over the next five years. Europe faces a tough economic outlook post-pandemic. Investment in fiber (FTTH) and 5G is a priority, but opex must be reduced and ARPU sustained to beat inflation.

In 2022, CSPs will rethink operating models while enjoying unusually strong demand. This brief is intended to help service providers understand and respond to the key strategy trends in TMT in 2022.