The March 19 early morning fire at the N3 Building of Renesas Semiconductor Manufacturing's Naka Factory in Hitachinaka, Japan, caused no casualties or damages to the building. However, the company has reported damage to utility and manufacturing equipment in the building.

An investigation led by police and fire authorities determined that plating equipment caused the fire after it ignited due to overcurrent, according to Renesas.

The N3 Building produces 300mm wafers, and manufacturing has halted while Renesas assesses the damage impacts. The company noted that, while the fire did not affect that second floor of N3, operations are integrated between the two floors so currently the facility cannot manufacture product.

Notably, during a March 21 online briefing Hidetoshi Shibata, the company's president and CEO, stated that approximately two-thirds of the production on the 300mm line affected by the fire was for the automotive market, according to a Reuters report on the briefing.

Since Renesas reported that there was no damage to its N2 Building, which produces 200mm wafers, Omdia does not expect the fire to further exacerbate the global chip shortage that has been caused by spiking demand and ongoing manufacturing constraints on 200mm wafers. (See the Omdia Chip Shortage Advisory for more on the ongoing chip shortage.)

Regarding 300mm wafers, while N3 is the only 300mm fab operated by Renesas, Omdia estimates that the output from N3 accounts for only about 0.2% of total global 300mm output. (Omdia estimates that 20-25% of Renesas' total chip output comes from N3.)

However, the production halt on the 300mm line at N3 could cause shortages on specific semiconductor devices such as microcontrollers, which would further add to the headaches facing automakers that depend heavily on Renesas’s products and that already are contending with the chip shortage. (See accompanying graph, "2020 Microcontroller Unit Market Share.")

The extent of the impact on automakers and others that rely on 300mm chips from Renesas will depend on how quickly Renesas is able to get N3 back into production. If production resumes within one month, as the company currently projects, or even requires several months to fully come back online, the fire should not spark a broader conflagration in the supply chain but merely isolated – and likely temporary – flareups in "hot spots" like MCUs. 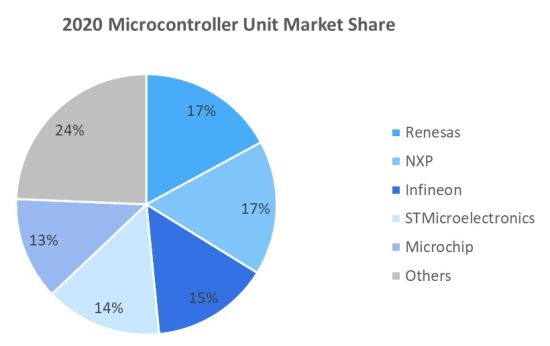 30 March 2021 UPDATE: Since our initial post on the Renesas fire, the company has provided an update of its initial assessment of the damage and estimated recovery, stating that it expects to fully restore production out of the N3 Building approximately 100 days after the fire, assuming that it is able to obtain all the needed production equipment by the end of April. Omdia will provide further updates to this post as additional information becomes available.