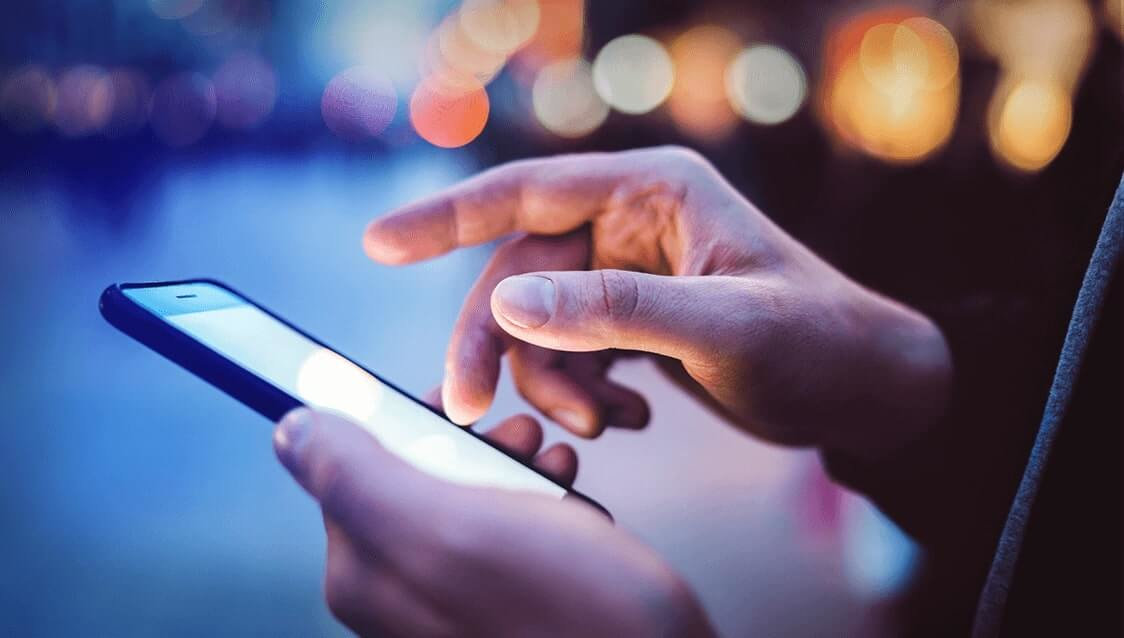 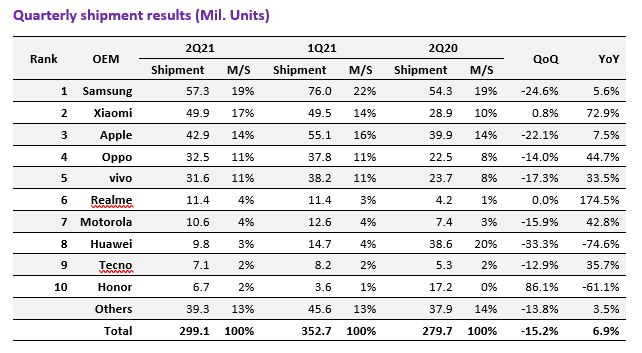 Samsung took the top spot, shipping 57.3 million units, up 5.6 percent YoY, compared to the 54.3 million units shipped in 1Q20. The mild growth in shipments in the second quarter was largely attributed to a supply constraint of key components and reduced operations at production facilities due to the spread of delta variants in India and Vietnam, where Samsung's main production bases are located.

Xiaomi reached second place in 2Q21, shipping 49.9 million units – up 72.9 percent compared to 2Q20. Xiaomi did not see shipments decline QoQ, instead growing just under one percent from 1Q21 to 2Q21. Xiaomi also experienced a decrease in production due to the spread of Covid-19 delta variant in India in the second quarter, but the decrease in shipments was relatively small compared to Samsung. On the other hand, a significant increase in sales outside the Asia-Pacific region, where the spread of the coronavirus is severe, is the main reason for the increase in shipments in the second quarter.

Apple, in third position, saw shipments increase 7.5 percent YoY - thanks to a recovery in demand in developed markets and an increase in demand for premium smartphones in emerging markets.

Realme grew shipments by 174.5 percent to 11.4 million units, up from 4.2 million units in 2Q20 – retaining 6th position globally again. QoQ, shipments were flat for Realme. Realme is one of the few OEMs that brought QoQ growth in Q2 along with Xiaomi and Honor.

Transsion holdings brand Tecno grew shipments by 35.7 percent YoY, from 5.3 million units in 2Q20 to 7.1 million units this past quarter.

The rankings of 2Q21 also reflect the rankings for the first half of the year to a large extend. 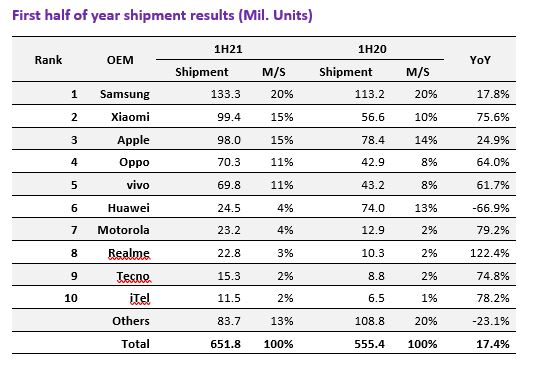 With its steady performance in the first two quarters of the year, Xiaomi secures second place, with 99.4 million units shipped so far in the year. Apple is in third spot with 98.0 million units. Apple’s shipments increased 24.9 percent compared to 1H20.

Motorola and Realme are close in seventh and eighth position, with 23.2 million and 22.8 million units shipped in the first half of this year, respectively.

Instead of LG, iTel made the 10th place. Transsion's sub-brands Tecno and iTel made it into the top 10. Including Infinix, Transsion is the 6th largest OEM worldwide.

JUSY HONG, Senior Research Manager consumer devices at Omdia commented: “Despite the spread of the Corona Delta variant and the component shortages, smartphone shipments grew year-on-year in the second quarter. However, 3Q shipments are expected to turn to negative growth compared to the previous year due to continued supply shortage and reduced demand.”