Pandemic-driven demand boosts semiconductor market up 10.4% year-over-year to $473.3 billion in 2020 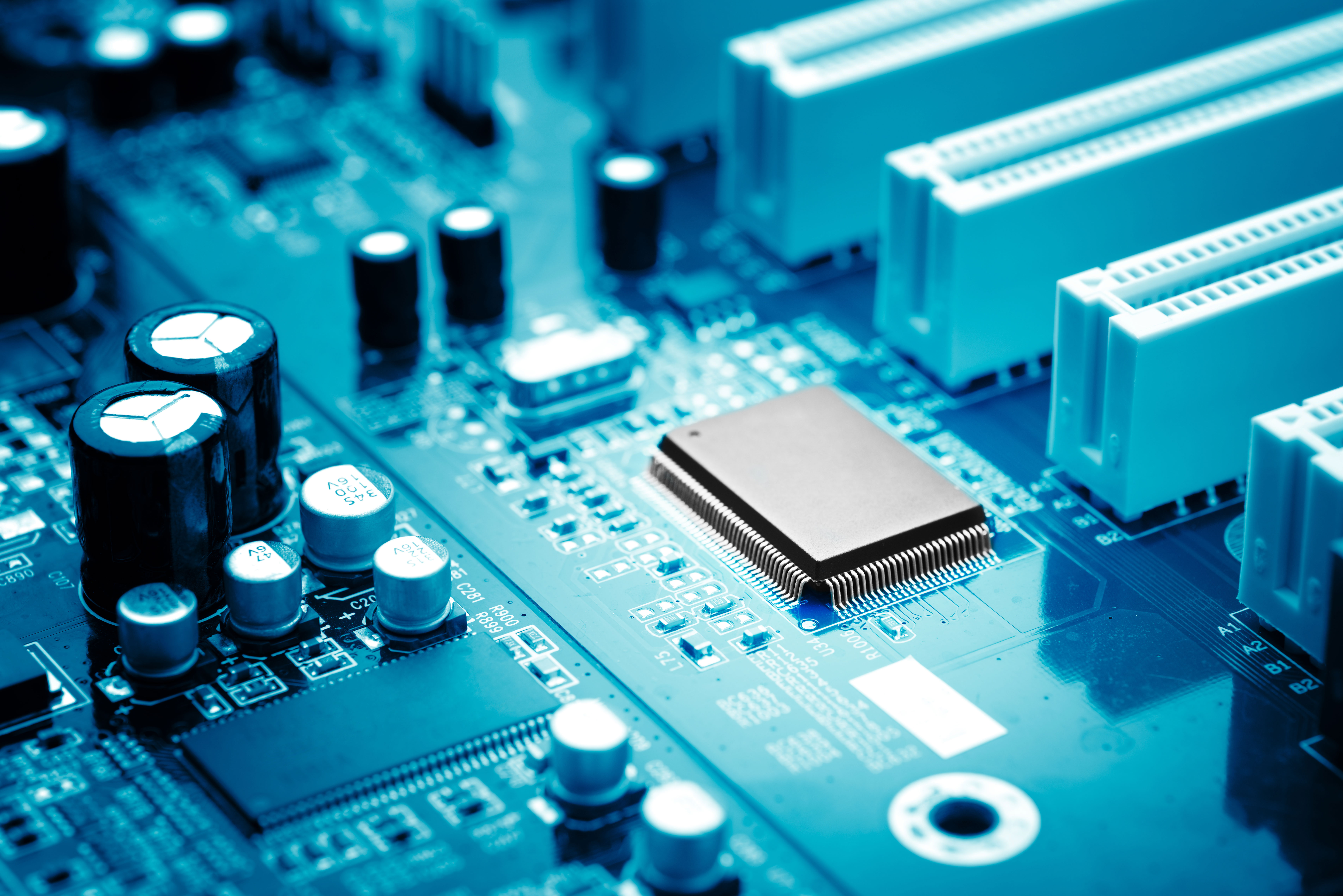 London (March 15 2021) – The semiconductor market saw strong growth in 2020 as the industry marked its third year in the last four of double-digit expansion, despite turmoil from the coronavirus that disrupted many global industries, according to the latest release of a comprehensive analysis of the semiconductor market from research firm Omdia.

Rapid shifts in consumer behavior over the past year pushed the world into a technology-driven focus, and demand increased rapidly for devices and infrastructure to support the new work- and educate-from-home environments in the face of pandemic-driven restrictions. As a result, semiconductor revenue grew 10.4% in 2020 over 2019 to finish last year at $473.3 billion, Omdia reported in the 4Q20 release of its Semiconductor Competitive Landscape Tool (CLT).

The last three months of 2020 were the best quarter ever recorded for semiconductor revenue, reaching $130.6 billion and eclipsing the previous high of $130.4 billion in 3Q18, Omdia reports in the 4Q20 release of the CLT, which provides a competitive analyst of the global semiconductor market by company, product category, market application and region.

The second half of 2020 was much stronger than the first, when deep uncertainty abounded as the pandemic quickly spread throughout the globe. Q20 and 4Q20 semiconductor revenue rose 9% and 7% quarter-over-quarter (QoQ), respectively, as consumer demand returned for many applications in 2H20.

But the first half of 2020 wasn't all bad for the semiconductor market, Omdia notes. The immediate shift to work-from-home and educate-from-home drove a need for cloud infrastructure to sustain it. DRAM and NAND were major beneficiaries of this trend, with memory IC revenue up 10% QoQ from 1Q20. This helped sustain the semiconductor market when other areas struggled before they grew strongly later in 2020.

Notable growth came to the major mobile processor firms. Large revenue increases by Qualcomm and MediaTek were driven by strong demand for smartphone chipsets to close out 2020 as 5G continues to ramp. Both firms experienced greater than 45% growth in 2H20 from 1H20 in this segment. Despite this strong growth, Qualcomm rose only from 6th in 2019 to 5th in the 2020 semiconductor market share rankings. Intel continues to lead the market with the major memory makers (Samsung Electronics, SK Hynix, and Micron Technology) rounding out the top-four. 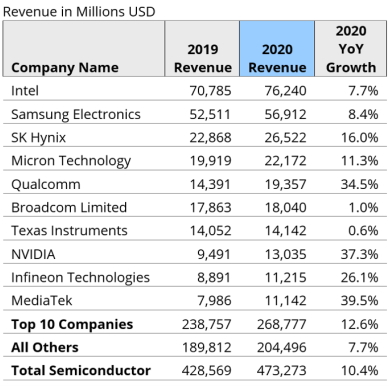 The memory market was a primary contributor to the 2019 decline in semiconductor revenue, with DRAM declining 37.2% and NAND declining 24.6% in 2019. Both memory types returned to growth in 2020, with DRAM up 6.7%. But NAND was one of the semiconductor market's strongest performers last year, up 24.3% to $57.2 billion, benefiting from strong demand for cloud services and PCs.

"2020 had been projected to be a rebound year following a disastrous 2019. Then COVID-19 it," notes Craig Stice, Omdia Chief Analyst. "In 1H2020, as COVID-19 began to spread across the world and stay-at-home mandates were put into place, demand for NAND surged. Memory demand from datacenters erupted due to 'at-home' environments. PC markets flourished as corporate, consumers, and educational markets were upgrading PCs for at-home use, and at-home entertainment spiked (TV, gaming). All this drove increased ASPs in 1H2020 and contributed to the strong annual revenue gains."

MPU revenue, representing 14% of the entire semiconductor market, increased 12.4% in 2020 driven by laptop and desktop increases as people were forced to work and study from home. According to Omdia Senior Research Analyst Kelson Astley, while COVID-19 has been a disadvantage to travel and social interaction, the MPU market has reaped some of the most benefits.

"Companies and education providers have had to purchase laptops to enable work/learn from home and the extended lockdowns in many countries have driven both current video game consumers to upgrade their desktop PCs as well as driven new consumers to buy gaming PCs and laptops," Astley says. "This sudden demand has also driven up ASPs, and thus pushed revenues up further. With the rollout of vaccines worldwide, this spike in demand will likely ease moving into H2 2021."

Not all segments improved in 2020

The automotive semiconductor market struggled in 2020, experiencing an annual decline of 4.4%, as an initial drop in consumer demand all but stalled auto sales early on in 2020. But the market ended 2020 with positive signs as demand began returning at the end of 2020.

Unfortunately, this return in demand was hampered when automakers came back with orders for semiconductor parts that were more difficult to procure. Capacity on production lines for these parts was already largely allocated to other components that had also increased in demand.

"The automotive market was hugely impacted by the coronavirus pandemic in the first half of 2020," says Sang Oh, Omdia senior analyst. "Unused semiconductor inventory from 1H20 was used into 2H20 for automakers. But consumer demand returned beyond what the revised downward forecasts anticipated. As automakers have been running through their vehicle inventory in 2H 2020, they are changing their vehicle sales forecast and need to pump out more vehicles to meet demand. The automotive semiconductor market will bounce back in 2021 from the decline of 2020."

More information on the impact of the IC shortage is available in Omdia's Chip Shortage Advisory.